by Sidra Hussain
in Buzz, Listicles
0 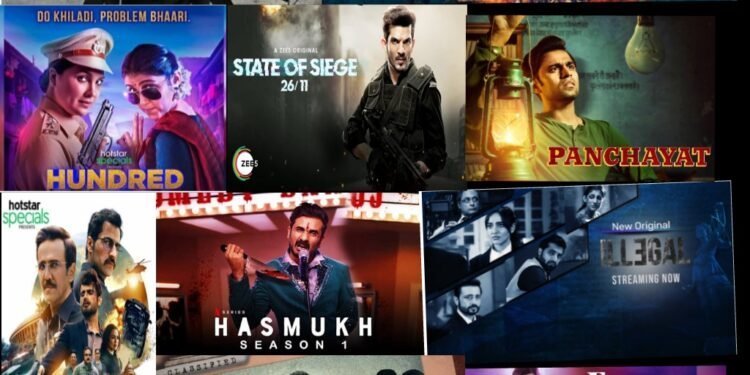 The world is taking a break from the usual routine. Thus, we all have a lot of time at home so, we can indulge ourselves in activities where we feel like we have ‘utilised’ our time. We are living in lockdown with the onset of the coronavirus pandemic, searching for hope and ways to connect but also just something to do besides following the news.
Has coronavirus lockdown left you concern and bored?
There are 10 Hindi Web series to watch in quarantine that will uplift or distract you, while also opening your mind and heart to other cultures.

Neeraj Pandey’s special ops started streaming on Disney plus Hotstar is another newly released web series that will entertain us. The cinematography of the show is brilliant and the screenplay is awesome as well. Along with k k Menon, Karan Tucker, Vinay Pathak, Saiyami Kher plays crucial supporting roles. The show revolves around a senior analyst in R&AW. Himmat Singh (K.K Menon) who believes that there is an involvement of a mastermind terrorist leader among various attacks in India.

Panchayat streaming on Amazon prime video with great performances by Jitendra Kumar and stalwarts like Raghubir Yadav and Neena Gupta. Abhishek Tripathi (Jitendra Kumar) is a newly graduated young man from Delhi. He’s unable to find a good job in the city, he impelled to accept the only offer he has in hand, an unattractive government posting in a small village in Uttar Pradesh.

Voot select’s a new edge of the seat drama. The Raikar Case is making a buzz all over the internet. Story writers Bijesh Jayarajan and Anaitha Nair have crafted the plot in a way that you get entangled in the mystery. Ashwini Bhave,  Kunal Karan Kapoor, Reena Wadhwa, and Lalit Prabhakar play characters who look likes suspected murderers. Every episode reveals one of their probable motives and makes you believe that he or she could have killed the youngest member of the family. The twists and turns are good and alter the story’s event quickly.

A gripping ZEE5 original series is a thorough recreation and reimagining of the attacks on Mumbai in November 2008. The crime thriller throws light on the lesser-known facts and the challenges faced by NSG commandos during the rescue operation. The show stars Arjun Bijlani, Arjan Bajwa, Vivek Dahiya, Mukul Dev among others.

Disney+ Hotstar’s special presents Hundred. Starring Larra Dutta, Rinku Rajguru, and Karan Wahi. In the story Lara Dutta plays a police officer role, she lives on her own terms, unapologetically. Whereas, Rinku plays a character of a terminally ill government employee and she has just a hundred days to live. The two women team up to fulfill their personal objectives, an entertaining ride ensues.

Illegal streaming on Voot the decent courtroom drama performed by Neha Sharma, Piyush Mishra, Akshay Oberoi, Satyadeep Mishra, and Kubbra sait. The show about an idealistic lawyer, who just wanted to be the keeper of justice in a world where justice is out of order.

Presenting Four more shots please season 2 only on Amazon prime video. Four best friends will cuddle up again and tell the world to sit-up and pay a little more attention to what women truly want. The problems remain simple yet complicated and funny to each other. They will make new mistakes, but love each other a little more fiercely and choose themselves over society and expectations. The show stars Sayani Gupta, Kirti kulhari, Bani J, and Maanvi Gagroo.

Betaal streaming on Netflix, starring Vineet Kumar Singh, Jitendra Joshi, Aahana Kumar, Suchitra Pillai among others.  The first Zombie horror series made for the Indian audience. A remote village becomes the arena of breathless battle when and undead East Indian company officer and his battalions of zombie redcoats attack a squad of modern-day soldiers.

Streaming on Netflix starring Virdas, Ranvir Shorey among others. Hasmukh is a weird, dark comedy series. It does come with an amazing premise. The show is the story of a small town comedian who believes that he can perform on stage only when he has murdered someone. Vir Das’s character and its arc also make the series worthwhile. Whereas, Ranvir Shorey as the gold-toothed Jimmy Bhaiya and his chemistry with Das, Amrita Bagchi as the strong showrunner and Ravi Kishan as the creepy TV boss are still believable and entertaining.