From Fraiser Crane's fancy Seattle pad to Jess and the gang's Los Angeles loft, these sitcom apartments are the coolest you could have ever seen. 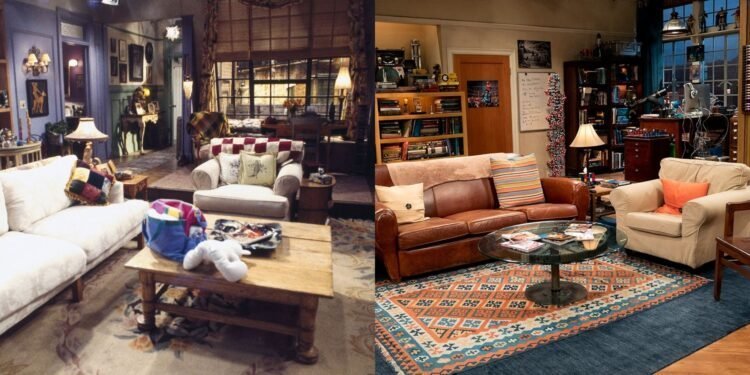 The apartment is one of the most basic settings in sitcoms, and it’s where the majority of the action takes place in programs centered on individuals who live together. After all, it’s the characters’ home, and because the audience spends so much time with them, it becomes a sort of figurative home for them as well.

While this may give viewers excessive expectations of what is affordable and feasible (not to mention apartment envy), it’s still entertaining to imagine living above MacLaren’s bar in New York or even under the sea in a pineapple.

The trendy and artsy home of Max and Caroline in 2 Broke Girls is located in Brooklyn’s Williamsburg district.

The two ‘broke’ waiters are unlikely to be able to buy this vast, open-plan apartment with a garden and exposed wooden beams in one of New York’s most gentrified and coveted locations.

Despite this, the girls’ pad, which is next to the cafe where they work, is the backdrop for many of the show’s most hilarious episodes, such as when they rent the place out on Airbnb to a bunch of supermodels or when Caroline slips in the yard and gets covered in horse poo.

For most of the series, The Big Bang Theory roommates Leonard and Sheldon live in this Pasadena apartment. Their apartment is surprisingly friendly for this group of introverts.

Many of the show’s most memorable sequences — such as when Sheldon and Amy build a fort and when Sheldon tries to teach Penny physics — take place in the living room, which is full of comfortable seats.

A Rubik’s cube, hundreds of books, a DNA Double Helix Molecular Model, and a telescope are among the interesting science accouterments and memorabilia in the flat.

3. Dev’s Apartment (Master Of None)

Although it doesn’t appear in the most recent season of the show — Dev himself barely does — Dev’s Lower East Side New York abode is a fixture in Master of None’s first two seasons and aptly mirrors Dev’s personality.

The apartment includes a large kitchen for preparing handmade pasta, a lovely living room for watching old black-and-white movies when it snows outside, and a hipster vintage industrial vibe with exposed brick walls, funky lights, and a large record collection.

According to Apartment Therapy, Aziz Ansari even assisted in the design based on his personal preferences in interior design.

While not precisely an apartment, SpongeBob SquarePants’ namesake protagonist has one of the coolest living arrangements on television.

Spongebob’s three-story home has a home library, a fitness area, a garage, and a backyard. At 124 Conch Street, he lives with his pet snail Gary and his Krusty Krab coworker Squidward.

However, there are some disadvantages to the house. For starters, it’s at the very bottom of the Pacific Ocean.

It is also entirely demolished on several occasions, once by a self-destructing Krabby Patty communications device sent by Mr. Krabs, and once by a swarm of pesky little nematodes. A foghorn alarm clock, on the other hand, is cool.

5. Ted’s Apartment (How I Met Your Mother)

Ted, Marshall, and Lily live in this two-bed Manhattan pad above MacLaren’s pub for the majority of How I Met Your Mother until the latter two relocate to a house in the suburbs.

It’s replete with a roof, excellent for parties and interventions, and serves as the center of the show’s world, similar to the setting in Friends.

Ted and Marshall have crammed every square inch of this Upper West Side property with books, video games, and other intriguing and weird stuff they’ve collected over the years, like a red phone booth and a pair of swords.

There’s also a piano, Ted’s work desk by the window, and a slew of other famous and significant items.

The Dreamatorium is the only apartment on the list that has one. Troy and Abed from Community transformed their second bedroom into a playroom where they could engage in whatever adventure or dream they wanted.

Except for the Dreamatorium’s “engine,” which is kept in a closet, the walls are black with yellow squares, and the room is vacant. In “Introduction to Finality,” they, unfortunately, dismantled the Dreamatorium.

However, whether it’s Yahtzee, building a scale model of the boulder scene from Indiana Jones, erecting a blanket fort, or putting on a show for Annie using cardboard cutout figures, their flat is very much a place of fun and games.

Carly’s brother Spencer lives in this three-story apartment in the iCarly reboot, although it was also Carly’s house throughout the original series run.

This bright and colorful loft in Seattle’s Bushwell Plaza has been turned from a business to a residence. This means it has a private cargo elevator (for transporting ostriches), high ceilings, and plenty of room for Spencer’s bizarre sculptures, such as the ‘Bottle Bot’ robot constructed of Coke bottles, Yippee-Yi Yo-Yo, and a bar made out of the back of a pickup truck.

Carly, Freddie, and Sam shoot the online show on the third floor of the flat in the original series.

On the back wall is a wide window with colored glass panes, as well as beanbags, carpets, a plethora of accessories, and even the bonnet of a car with orange flames. Any flat with a separate studio is unique.

It’s adorned with a grand piano, African statues and paintings, and high-end furnishings, all in keeping with his fastidious but varied taste. With its dining room and huge living room, it’s also ideal for organizing formal dinner parties.

Frasier, his elderly father, and his father’s carer, as well as Frasier’s love interest, Daphne, live in this three-bedroom pad. His father insists on bringing his old reclining chair with him when he initially moves in, which seems out of place among Frasier’s elegant antiquities.

Frasier initially tries to get rid of it but soon grows fond of it and even requests that the removal guys handle it when his father moves out.

Since the conversion of inner-city lofts from industrial to residential use, they have been home to various groups. Originally, they were utilized by musicians as studios or intimate showcases.

The artists then arrived, taking advantage of the low rent and large windows. Then there were the young professionals, like Jess, Nick, and the rest of the New Girl crowd.

With high ceilings, big rooms, industrial metal doors, and a wide roof area, their Los Angeles loft is a highly desirable space. They even have a locker-room-style bathroom that is shared.

New Girl may have created unreasonable expectations about what it’s like to live in a house with strangers, but it’s a great location and the setting for many sweet bonding scenes.

Monica’s purple-walled home on Friends, which she lived with several other group members throughout the show’s ten seasons, is the most iconic comedy apartment.

Apart from Central Perk, the West Village apartment is the most important setting in the series. The gold frame surrounding the door’s peephole, the “Aux Buttes Chaumont” poster, and countless crucial scenes from the series are all remembered by fans.

This is where Ross dresses up as a huge armadillo to teach Ben about Hanukkah, where Chandler spends six hours in a box to regain Joey’s trust, where the apartment-switch quiz takes place, and where the gang all leaves their keys on the kitchen counter on their way out the door.

It is without a doubt the coolest apartment in the history of sitcoms.

Also Read: 9 Little Things You Can Do To Brighten Someone’s Day