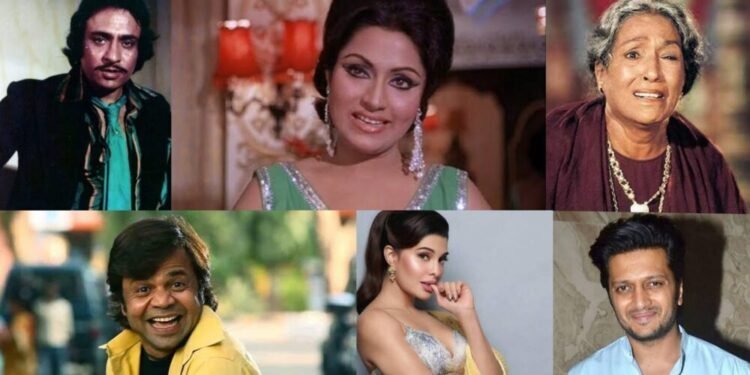 Many of our Bollywood stars have played their roles with so much passion that they don’t seem to get off from that image. The image that they have made in their entire career. They have been continuously typecasting in their movies

To know more about them, scroll and check the list below.

The actress has caught our attention with her quirky Punjabi-mother style. She has played the role of a Punjabi mother in many films such as Dostana, Khoobsurat, Hum Tum, Om Shanti Om.

Bindi started his career as a vamp and became the toughest competitor of the top-class dancer, Helen. But after her miscarriage, she didn’t continue dancing and began her career as an actor. She was continuously typecasting as a cruel mother-in-law, step-sister, and more. The most recognizable films are Ghar Ho To Aisa, Biwi Ho To Esi.

Nushrat gained the spotlight after the success of the Pyaar Ka Puchnama film. And eventually, after the film, she typecasted in the same type of films such as Sonu Ke Titu Ki Sweety, Pyaar Ka Punchnama 2, and more. She always works as a dominating partner with perfection. We would love to see her in roles other than her monotonous role.

His same role journey starts from Wake Up Sid and Yeh Jawani Hai Deewani, he has performed the character of a selfish man child.

Jacqueline is much more worthy than her looks. She has worked in the same type of role in many films such as Race 3, Kick, Dishoom, Judwa 2, Housefull 2 & 3.

The actor, who is famous for his villain role in the entire B town. Ranjeet was the best actor as the villain of his time. He even worked as a lusty doctor in Housefull 2. He was popularly known for his lustful character scene.

If Kirron Kher works as a quirky Punjabi-mother, Lalita was quite the opposite. She had been typecast in many films as a cruel mother-in-law role such as Gharana, Sau Din Saans Ke, Man Ki Ankhe.

Ritesh also typecasts in films as funny, scared, and brimming with bad ideas. He played such a role in films – Masti, Housefull series, and more. He also worked as a villain in his two films, Ek Villain and Marjaavan.

Varun works as a childish and funny actor in most of his films such as Student Of The Year, Humpty Sharma Ki Dulhaniya, Dilwale, Coolie No. 1, and Mein Tera Hero.

Rajpal Yadav, a comic character in most films such as Dhol, Malmaal Weekly, Bhagam Bhaag, Bhool Bhulaiya, and many more. The actor is much more worthy than this, we hope in future he will get something good to show his talent.