While masala movies have been a constant in Bollywood, we haven’t seen any good ones lately. So here’s remembering an old one on its tenth anniversary and reminiscing about the good old times. Yup, you heard it right, 10 years! 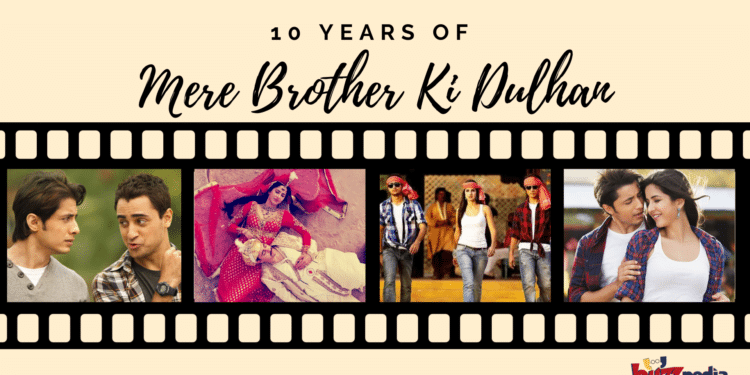 Well, it feels like only yesterday when we saw the very fresh pairing of Ali Zafar, Imran Khan, and Katrina Kaif in the 2011 movie ‘Mere Brother Ki Dulhan’ directed by Ali Abbas Zafar. It was a typical, sweet rom-com that left you happy to the core.

The plot of the movie is as simple as it gets, which essentially adds to the flavor of the film. There is no over intellectualization of love and relationships. It is a funny, sweet, and happy movie that was loved back then and still remains a guilty pleasure for most. Here’s looking back at those simpler times through the amazing album of the movie, which was its X-factor.

The score and soundtrack of the film were composed by Sohail Sen, and we still cannot get enough of these songs:

Who on earth would have imagined such a catchy song about a matrimonial ad? This is the first song of the movie and it sure does capture the essence of it.

It has been picturized on Kush (Imran Khan), who is set on a venture to find the most suitable bride for his elder brother, or BhaiSaab as he likes to call him, Luv (Ali Zafar). The lyrics of the song are really witty and one cannot help but sing along.

This song introduces us to the rock star ‘D’ aka Dimple (Katrina Kaif) and are we blown or are we blown? The song sets us up to all the tremors we are about to feel since Dimple has walked in.

The entire look of the song ft. Katrina Kaif’s gothic look goes so well with the electronic beats of the song. And Neha Bhasin’s voice adds just the right amount of texture.

What did we say about feeling tremors when Dimple is around? Yes, this song captures exactly that essence. It is a song that asks you to be carefree for a minute or two and feel the life around you.

Picturized on the crazy ride Dimple and Kush take up one last time because Dimple wants to do every atrocious thing before she gets married, this song is bound to make you tap your feet.

It is the only song of the movie that is set on a slightly sad note, but we love it.

The typical sangeet song of every movie is set around a big fat Indian wedding. The song is beautifully picturized in what seems like a fort setting. It begins on a high note and successfully carries it throughout the song. With amazing vocals, the song will surely pull you to the floor and make you dance even if you don’t want to.

Also, one can simply not miss out on the on-point expressions of Ali Zafar. I mean, who wouldn’t react that way seeing their ex dance with their younger brother at their wedding party? We feel you, BhaiSaab.

Well, you simply can’t have Ali Zafar act in a movie and not have him sing a song? That’s a sheer waste of his talent. This fun and groovy song in Ali Zafar’s fun-filled vocals will make you dance like no one’s watching. The song captures the essence of the celebratory mood of a family who has a wedding approaching.

And who can miss out on the funny interjection of ‘Arey thak gaye kya, Arey bhaiya UP aaye, Aur saala dhol nahi bajaa, Toh kya khaak UP aaye?’ Also, it was great to see Imran Khan and Ali Zafar, two non-dancers, matching steps with Katrina Kaif.

Also Read: The Top 15 Netflix Original Films Of All Time Around The World