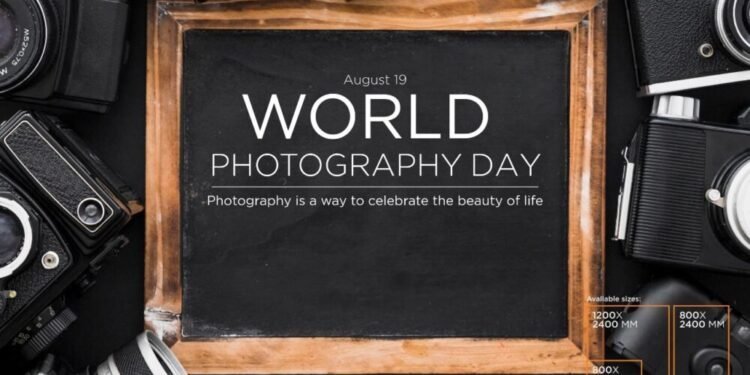 World Photography Day is observed yearly on 19 August. It is a global celebration of the art, craft, science and history of photography. A photograph captures a place, an experience, an idea, a moment of life that can be relived and cherished time and again by only looking at that photograph. For this reason, it is said that a photograph is worth a thousand words.

A photograph can make the viewer see the world with the photographer’s eye. Photos even transcend the passing of time i.e; a photo from a hundred years ago can still be as admired now, as it was then. A photo taken tomorrow can still be just as admired by others in a century. Photography works as a means of personal expression and admiration for many people across the globe.

Origin and Evolution of Photography

The origin of World Photography Day lies in the invention of the Daguerreotype, a photographic process developed by Frenchmen Louis Daguerre and Joseph Nicephore Niepce in 1837.  The French Academy of Sciences made an announcement regarding the Daguerreotype process on 9 January 1839. Later, on 19 August, the French Government bought the patent and announced the invention as a gift “free to the world”.

The first long-lasting colour photograph was taken by Thomas Sutton in 1861. However, the photographic technology then in use was substandard therefore, the result was very flawed and the demonstration was soon forgotten.

Whereas the first digital image was produced in 1957 through the computer by Russell Kirsch, of his son, almost 20 years before the invention of the first-ever digital camera in 1975 by Kodak engineer Steve Sasson.

However, it was much later on 19 August 2010, when the World Photography Day hosted its first global online gallery. Nearly 270 photographers shared their pictures and people from over 100 countries visited the website. This marked the first official, globally joining World Photography Day.

The cameras and photography has gone through a lot of technological innovations ever since it’s invention. Today, the accessibility of affordable and high-quality digital cameras and phone in-built cameras has made photography a widespread hobby among the people worldwide.