Actors in general are coupled with abundant fame and wealth. Here’s finding out in this article, about the world's top 21 wealthiest actors (male).

by Daniyal
in Listicles, Wealth, World
2 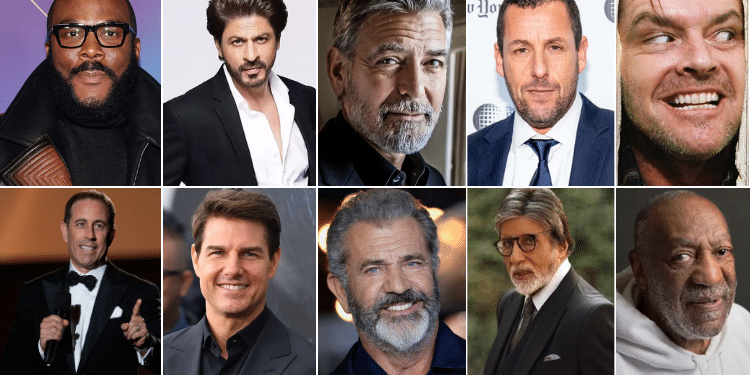 Some of the most popular actors in the world are worth more than a half-billion dollars! We’ve decided to compile a list of the 21 richest actors worldwide, along with their current net worth, and a short bio.

Leonardo Wilhelm DiCaprio is an actor, film producer, and environmentalist from the United States. He has a history of playing unusual parts, particularly in biopics and historical films. Between 1995 and 2020, he earned around $300 million.

He’s also made a lot of money from real estate and venture capital ventures. ‘The Basketball Diaries’, ‘Titanic’, and ‘The Revenant’ are among the films in which DiCaprio has appeared. As of 2021, Leonardo DiCaprio’s net worth is roughly $260 million.

Brad Pitt is an Oklahoma-born film producer and actor. He’s most known for his roles in ‘Seven’, ‘Fight Club’, ‘Ocean’s Eleven’, and ‘World War Z’. Brad Pitt’s appearance has graced many magazine covers, and in the 1990s, he was dubbed “Hollywood’s Sexiest Man Alive”.

His production firm, Plan B, was responsible for films including ‘Eat, Pray, Love,’ ‘Kick-Ass,’ and ‘Inglorious Basterds’, which grossed $320 million at the box office. Brad Pitt’s net worth is estimated to be $300 million in 2021, making him one of the wealthiest actors of all time.

Mark Wahlberg is a well-known American actor and model who is regarded as an A-lister.

Not only is Wahlberg a successful actor and model, but he is also a well-known producer who served as executive producer on HBO’s “Entourage”. Mark Wahlberg’s net worth is projected to be $350 million as of 2021.

Will Smith is an actor, film producer, and rapper from the United States. Before he was 20, Smith had amassed a million-dollar fortune.

Will Smith is best known for his roles in the films ‘The Fresh Prince of Bel-Air’ and ‘Men in Black’. Smith’s record-breaking three premieres in 24 hours earned him a place in the Guinness Book of World Records. Will Smith has a net worth of $350 million as of 2021, making him one of Hollywood’s highest-paid actors.

Michael Douglas is a New Jersey-based producer and performer. He has established himself as one of Hollywood’s most powerful shakers and movers.

In the 1990s, he was one of the most successful producers. Michael Douglas’ net worth is estimated to be over $350 million as of the current year. He is the 18th most wealthy actor of all time.

Keanu Charles Reeves is a Canadian actor, director, producer, and musician who has worked in a variety of roles. He has been in a number of films that have been box office successes.

You may recognize him as Neo from ‘The Matrix’ or as John Wick from ‘John Wick’. Keanu Reeves’ net worth is $360 million as of 2021, putting him in 16th position on the list this year.

Jackie Chan is a Hong Kong actor, martial artist, and filmmaker noted for his comedic acrobatic fighting style, comic timing, and creative stunts, which he usually does himself. Jackie has been acting since the 1960s and has been in over 150 films.

He has been honored with stars on both the Hong Kong Avenue of Stars and the Hollywood Walk of Fame. Jackie Chan’s net worth is projected to be at $370 million as of 2021.

Thomas Jeffrey Hanks is an actor and filmmaker from the United States. He is considered an American cultural icon and is known for both comic and tragic performances. He is one of the most renowned and recognizable cinema stars globally.

Hanks’ films have made over $4.9 billion in North America and $9.96 billion globally, making him the fourth highest-grossing actor in the country. Hanks has appeared in a number of films throughout the world, including ‘Forrest Gump’, ‘The Da Vinci Code’, and ‘Angels & Demons’.

With $1 billion in box receipts, his voice-over as Woody in Toy Story 3 helped the film become the year’s highest-grossing film. Tom Hanks has a net worth of $400 million dollars.

Arnold Alois Schwarzenegger is an Austrian-American actor, producer, businessman, professional bodybuilder, and politician who served as California’s 38th governor from 2003 to 2011. He is the most recent Republican governor of California as of 2021.

His breakout film was the sword-and-sorcery epic ‘Conan the Barbarian’ (1982), a box-office smash that spawned a sequel in 1984. He had previously featured in the bodybuilding documentary Pumping Iron (1977).

Sylvester Enzio Stallone is an actor, screenwriter, director, and producer from the United States.

He received his first critical recognition as an actor for co-starring with Stanley Rosiello in ‘The Lords of Flatbush’, after suffering as a struggling actor for a number of years after coming to New York City in 1969 and subsequently Hollywood in 1974.

After that, Stallone worked as an extra or side character in films with a larger budget until he found his greatest critical and financial success as an actor, beginning in 1976 with his self-created part of boxer Rocky Balboa in the first installment of the popular Rocky series (1976–present). As of 2021, Sylvester Stallone’s net worth is projected to be $400 million.

He is an American standup comedian, actor, and author. His active career spanned six decades before he was convicted of a number of sex offenses in 2018. He is best known for his performance as Dr. Huxrable in his own sitcom ‘The Cosby Show’.

The show highlighting the experiences and growth of an affluent African-American family was rated as the number one show in America from 1985 to 1989. His net worth is $400 million.

John Joseph Nicholson is an American actor and filmmaker who has had a 50-year career. He is recognized for his portrayals as comic characters, romantic leads, anti-heroes, and villains in both leading and supporting parts.

He played the “eternal outsider, the sarcastic wanderer” in several of his works, someone who struggles against the social order. With a net worth of $400 million, Nicholson is one of the wealthiest actors.

Amitabh Bachchan is an actor, producer, television host, occasional playback singer, and former politician from India. He is widely considered as one of Indian cinema’s best and most influential performers.

During the 1970s and 1980s, he was India’s most prominent actor; French filmmaker François Truffaut dubbed him a “one-man industry”. With a net worth of $400 million, he is one of the wealthiest Bollywood stars of all time.

Adam Richard Sandler is an actor, comedian, musician, screenwriter, and film producer from the United States. From 1990 to 1995, he was a cast member of ‘Saturday Night Live’ before moving on to appear in a number of Hollywood blockbusters that have grossed over $2 billion at the box office.

In 2020, Sandler’s net worth was reported to be $420 million, and he inked a new four-movie agreement with Netflix for more than $250 million. Adam Sandler, as of now, has a net worth of $420 million, making him one of Hollywood’s wealthiest actors/producers.

Mel Columcille is a character in the film Mel Columcille Gerard Gibson is an actor, film director, producer, and screenwriter from the United States.

He is most recognized for his action hero roles, most notably as Max Rockatansky in the first three Mad Max films and as Martin Riggs in the buddy cop film series Lethal Weapon. Mel Gibson’s net worth is predicted to be at $425 million in 2021, making him one of the wealthiest performers in 2020.

Robert Anthony De Niro Jr. is an actor, producer, and director from the United States. He is most recognized for his nine collaborations with filmmaker Martin Scorsese, for which he won two Academy Awards, a Golden Globe Award, the Cecil B. DeMille Award, and a Screen Actors Guild Life Achievement Award.

He’s appeared in films including ‘Meet the Fockers’, ‘Meet the Parents’, ‘The Intern’, and ‘Dirty Grandpa’ in recent years. However, you may recall De Niro from films such as ‘Goodfellas’, ‘The Godfather Part II’, ‘Analyze That’, ‘Casino’ and ‘Heat’. Robert De Niro’s net worth is now believed to be $500 million.

George Timothy Clooney is an actor, film director, producer, screenwriter, and philanthropist from the United States. Three Golden Globe Awards and two Academy Awards have been bestowed upon him, one for starring in Syriana (2006) and the other for co-producing Argo (2012).

He was honored with the AFI Lifetime Achievement Award in 2018. George Clooney is a Kentucky native. Among other honors, he earned many prizes for his films over his career. George Clooney’s net worth is now $500 million.

Thomas Cruise mainly known as Tom Cruise is an actor and producer from the United States. He has earned several awards for his work, including three Golden Globe nominations and three Academy Award nominations.

He is one of the world’s highest-paid actors. His films have made more than $4 billion in North America and more than $10.1 billion globally, making him one of the highest-grossing movie actors of all time.

Tom Cruise’s net worth is $570 million in 2021, making him the world’s fourth-richest actor.

Shah Rukh Khan, abbreviated as SRK, is an Indian actor, film producer, and television personality best known for his work in Hindi cinema. He has featured in over 80 Hindi films and received several honors, including 14 Filmfare Awards.

He is known in the media as the “Baadshah of Bollywood” (in reference to his 1999 film Baadshah), “King of Bollywood,” and “King Khan.” He has been awarded the Padma Shri by the Indian government, as well as the Ordre des Arts et des Lettres and the Legion of Honour by the French government.

Khan has a huge fan base in Asia and the Indian diaspora across the world. Shah Rukh Khan is one of the wealthiest actors in the world, with a net worth of $600 million in 2021.

American comedian, actor, writer, and producer Jerome Allen Seinfeld has been newly added to the list of richest actors in the world. Best known for co-creating the American sitcom ‘Seinfield’ (in 1988) along with Larry David and playing a semi-fictionalized version of himself.

This Afro-American actor, writer, producer, and director in 2011, was listed as the highest-paid man in entertainment by Forbes. He is best known for playing the character ‘Madea’ an elderly woman.

Some of his greatest creations include ‘Daddy’s Little Girl’ (2007), ‘Why Did I Get Married?’ (2007) and ‘Diary of a Black Woman’(2002). He has also amazed the world as a screenwriter and is amongst the highest-paid actors in America. His net worth is 1 Billion in 2021, making him the richest actor in the world.