Hawkeye, a Disney+ original series starring Jeremy Renner and Hailee Steinfeld, has released a trailer. Here's how we broke down each reveal. 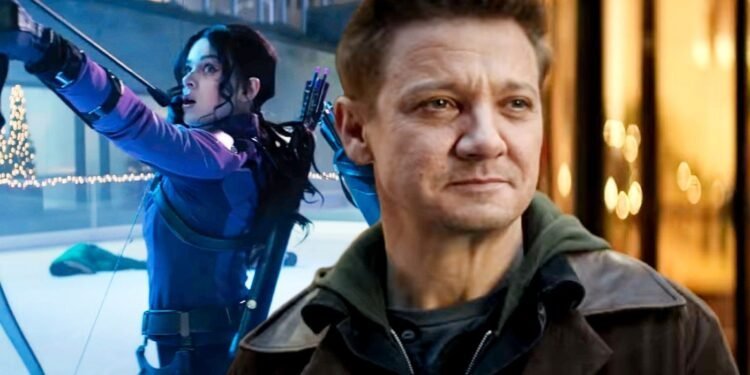 Here’s everything you need to know about the debut trailer for Disney+’s Hawkeye series, including every reveal and mystery.

Many Phase 1 character came to an end in Avengers: Endgame, but the MCU wasn’t quite done with Jeremy Renner’s Hawkeye, who got his solo series. Hawkeye takes place after Thanos has been defeated, and Barton and his family have finally been reunited.

Florence Pugh will reprise her role as Yelena Belova from Black Widow, while Lucky the Pizza Dog will make an appearance. Clint Barton’s return, set on November 24, isn’t quite as widely anticipated as WandaVision or Loki’s, but that was before Marvel released the first trailer for Hawkeye.

New footage hints at Hawkeye’s Christmas style, the Barton/Bishop interaction, and what brings two generations of archery fans together.

Even though Hawkeye will be released in the same year as two of the most anticipated films of the year (Eternals and Spider-Man: No Way Home), MCU fans should know not to underestimate Hawkeye.

Hawkeye will be a part continuation of Clint Barton’s Avengers: Endgame story, part setup for the future, and will introduce another Young Avenger to the MCU’s lineup, according to the teaser video.

The following are the most important takeaways from Marvel’s first Hawkeye trailer.

Clint enjoys a joyful supper in New York with his three children, Nathaniel, Lila, and Cooper, in the Hawkeye trailer.

Since Thanos snapped the entire Barton family (sans Hawkeye himself), Lila remarks that this is their first Christmas together “in years.” This is accurate.

Those five years, on the other hand, never transpired for Lila. Clint’s Avenger obligations may have prohibited him from spending the holidays with his family even before the snap.

The world has been celebrating Brooklyn’s skinny-kid-turned-good since Steve Rogers laid up his shield at the end of Avengers: Endgame.

Through Falcon & The Winter Soldier (the museum ceremony) and Spider-Man: No Way Home (the Statue of Liberty holding a shield), we’ve seen various tributes to Cap, and Hawkeye reveals that “Rogers: The Musical” is now an MCU Broadway production, described as a “timeless story for a timeless hero” and “a super-powered sensation.”

The Rogers musical, more than anything, highlights how Marvel is transforming Captain America and Iron Man into legacy characters for Phase 4.

Clint appears to take his children to see Rogers: The Musical, which is a funny detail. Even their favorite Avenger, Hawkeye, isn’t one of them.

4. Kate Bishop Is A Masked Vigilante

The first meaningful plot exposition in the Hawkeye teaser comes from a news item about a “masked vigilante.” Between Avengers: Infinity War and Avengers: Endgame, Clint Barton’s performance as Ronin was observed on both sides of the moral divide.

The world hasn’t figured out that Ronin and Hawkeye are the same people, and now that Barton has stepped down from his darker mantle, another masked vigilante has stepped forward to paint the underworld crimson in his place.

5. Why Hawkeye Leaves His Family (Again)

When Thanos arrived, Clint Barton was under house arrest, and he only returned to the field because his family had been dusted. With the Barton family reunited, fans wondered what would entice Hawkeye to return to the fight for his Disney+ solo series.

That question is answered in the trailer, revealing Kate Bishop’s Ronin cosplay as the root of the problem. Clint fears that his shady past is catching up with him (“when I wore the suit, I created a lot of enemies”), and he moves his children somewhere secure.

The archer stays behind to look into his strange impersonator’s motivation for going it alone against New York’s villains.

Hawkeye’s deafness has been a recurring feature of his character in Marvel comic books, first in the 1980s and then again in the 2010s, but it hasn’t been adapted into live-action – until now.

The addition of hearing aids to Jeremy Renner’s Disney+ outfit was previously reported, and Barton’s new device is seen in this photo. The introduction of Hawkeye’s deafness is only the latest indication of Marvel’s efforts to broaden its hero lineup.

The Hawkeye trailer gives us a clearer look at Hailee Steinfeld as Kate Bishop, as Barton is hunting for his shadowy imposter. Bishop, dressed as a Ronin, is cornered on a New York street and appears to be outmanned by thugs.

Fortunately, the young archer is already an accomplished warrior, capable of fending off goons and holding her own against larger foes. In Hawkeye, Steinfeld’s action won’t be restricted to shooting arrows.

It’s always fascinating to see how the rest of the fictitious world views the Avengers in MCU films. We all adore Thor, admire Tony Stark, and despise Spider-Man, but Falcon & The Winter Soldier provided a thorough examination of Steve Rogers’ legacy. Even Hawkeye has superfans, as Kate Bishop’s response to seeing Clint Barton demonstrates.

Kate’s joy demonstrates she’s a real Barton-ite, as she not only recognizes him right away. Jeremy Renner has stated that his character is perplexed by Kate’s admiration, and this sequence beautifully establishes that tension.

Kate Bishop’s Hawkeye fandom and willingness to pick up Ronin’s slack suggests she worked out Barton was the man for the job.

Kate Bishop’s talent with a bow and arrow is initially demonstrated in the Hawkeye trailer, when she fires a tennis ball at a bell-rope, hitting a perfect shot.

Bishop learned archery after Hawkeye (and the other Avengers) rescued her from El Matador in the Marvel comics, so she’s not a novice.

Maybe Kate from the Marvel Cinematic Universe was one of the youngsters Hawkeye rescued from the bus in The Avengers? Kate Bishop’s DIY approach is also displayed in this scene.

While Hawkeye uses cutting-edge technology and explosives in his arrows, Bishop is forced to rely on supplies from local sporting goods stores. Kate’s stroke, however, destroys the bell tower, indicating that her playing isn’t quite up to par.

10. Kate Is “The World’s Greatest Archer”

In the company of Hawkeye, Kate Bishop proclaims herself the world’s finest archer, which is like telling Thor you have the world’s most exquisite hair, but Kate does it anyway.

The courage to tell Hawkeye “some people” claim she’s the world’s best archer, and the self-awareness to realize she’s one of those people, is a perfect start to the humor Hailee Steinfeld will bring to the MCU.

11. Clint Barton’s Wife Is Still Around

Some fans may have been concerned about Clint Barton’s marriage when only Clint and his children appeared in the trailer for Hawkeye.

Any relationship would be strained if you returned to life after 5 years to find your husband had turned into a bitter vigilante.

So breathe a sigh of relief because Hawkeye gets a call from Mrs. Hawkeye asking, “where the hell are you?” in this brief trailer scene.

While sulking around as Ronin, Clint Barton irritated many unpleasant people, and Kate Bishop has made them even angrier. A gang of thugs throws a Molotov cocktail through a window, which Hawkeye (presumably; it’s hard to tell) returns with a shot Roger Federer would be proud of.

Who hired these thugs is the key question. Many expect Kingpin to make his MCU debut (when there’s a crime in New York, Fisk is never far away), but Tony Dalton (Better Call Saul’s Lalo Salamanca) is playing Swordsman a character with a shady comic background.

It’s more than likely Ivan Banionis. Banionis led the Tracksuit Draculas gang against Clint Barton in Matt Fraction’s 2012 Hawkeye comic run, and these men are dressed in tracksuits, despite the dim lighting.

It’s worth noting how similar Hawkeye feels to Die Hard as Clint Barton leaps from a window, seeking (unsuccessfully) to swing to safety.

The Yuletide backdrop, New York City, a man seeking to spend Christmas with his family, and plenty of leaping from lofty buildings are all shared by Bruce Willis’ 1988 Christmas classic and Marvel’s latest Disney+ endeavor. All we need now is Barton in a vest, barefoot.

Though the Hawkeye trailer focuses almost entirely on Clint Barton and Kate Bishop, we get a few views of some of the supporting characters, starting with Vera Farmiga as Kate’s mother, Eleanor Bishop.

In the Marvel comics, Eleanor is an affluent socialite, and a fleeting glimpse of Farmiga sipping champagne in Hawkeye suggests the same will be true in the live-action adaptation.

In the comics, Kate assumed her mother was dead, but there’s no evidence of that here, else Eleanor wouldn’t be depicted in the promo video.

Finally, the show’s true star. Clint acquires Lucky the Pizza Dog from Ivan Banionis in the comic books, taking the dog to the vet for treatment after an eye injury.

Hawkeye appears to be adopting the same story, as Lucky is seen in this photo with only one eye.

Hawkeye and LARPing aren’t exactly natural bedfellows, but in this trailer shot, Clint Barton and Kate Bishop are both enjoying a little historical recreation with local LARP aficionados, each brandishing swords against a bunch who are no doubt ecstatic to be clashing blades with an actual Avenger.

The background of this scene is unknown, but if Hawkeye and Kate Bishop needed a location to blend in while wielding bows and swords, a LARP group might be a good choice.

As with Vera Farmiga’s Eleanor Bishop, Alaqua Cox’s Maya Lopez, also known as Echo, is only seen briefly in the Hawkeye trailer. Maya first appears in the Marvel comics as a Kingpin follower who is exploited as a pawn in his efforts to eliminate Daredevil.

She subsequently transforms into a hero and takes on the Ronin avatar. Marvel has revealed that Echo, another deaf character, will be getting her Disney+ spin-off shortly, so her Hawkeye role could be a set-up for what’s to come.

Fans are ecstatic about the red illumination on Echo’s face, with some seeing it as confirmation of Echo’s Daredevil comic link making it into the MCU.

Hailee Steinfeld once again shows off her comic timing by firing an exploding arrow and then seeming surprised when she realizes it was one of Hawkeye’s tamer rockets.

The van she collides with is marked with “Trust-A-Bro,” a homage to the Tracksuit Draculas from the comic books who used “bro” all the time. Clint Barton has already carried acid tips, firebombs, and pulse emitters in the MCU, but we have a feeling his Hawkeye arsenal will go even deeper.

This picture also provides the finest glimpse of Kate Bishop’s superhero costume in Hawkeye in the trailer because it is set during the day.

Bishop’s outfit extends Hawkeye’s standard getup, except for the lack of arm and shoulder holes, which is largely similar to the comic books in color and style.

Yelena Belova shredded Black Widow’s superhuman position, but she would have chosen Hawkeye’s more creative “jump-turn-shoot” move, which Barton has demonstrated in both Marvel books and The Avengers.

Barton performs it again at the end of Hawkeye’s trailer to send the fans home pleased, but this time Kate Bishop mirrors the move directly next door. In Disney+’s Hawkeye series, Bishop is becoming Barton’s student, and it’s a fantastic show.

Also Read: 10 Theories About The Origins Of Shang-Chi And The Ten Rings That You Should Know