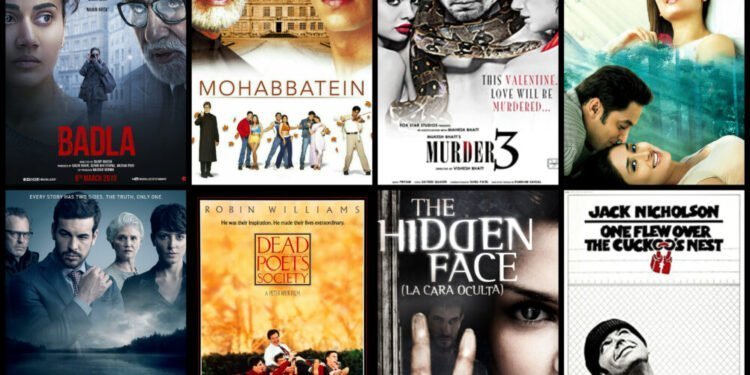 It is no news that Bollywood has been drawing inspiration from the international cinema for a long time. Some are truly inspired, some are official remakes while some are pretty much a frame by frame Ctrl+C and Ctrl+V. While a number of such movies were very impressive, some just made us wonder why. Although its exciting to see what new indie filmmakers can add to the script originally set elsewhere, it is also heartbreaking to see some copy the entire film under the garb of “ inspiration”.

Here is a list of Indian movies that were inspired by or were the official remakes of International cinema:

The Sanjay Gupta movie Zinda starring Sanjay Dutt came out in 2006 was inspired by the 2003 South Korean mystery thriller directed by Park Chan-wook.

The 2002 crime drama directed by Sanjay Gupta had an ensemble cast including Sanjay Dutt, Amitabh Bachchan, Kumar Gaurav, Lucky Ali, Sunil Shetty, Mahesh Manjrekar and Malaika Arora. It was an adapted version of the Quentin Tarantino’s  1992 movie. It also took some bits from Bryan Singer directed ‘The Unusual Suspects’ (1995).

The 2005 Ram Gopal Verma directed movie starring the father-son duo of Amitabh Bachchan and Abhishek Bachchan was set in Maharashtra but the world was inspired by the 1992 classic The Godfather directed by Francis Ford Coppola starring Al Pacino.

4. Sangharsh – The Silence of the Lambs

Jonathan Demme’s psychological horror that came out in 1991 (starring Jodie Foster) served as an inspiration for the Tanuja Chandra directed movie Sangharsh. It came out in 1999 and starred Ashutosh Rana, Akshay Kumar and Preity Zinta.

5. Baazigar – A Kiss Before Dying

Baazigar the 1993 Abbas-Mastan movie was what got the superstar Shahrukh Khan recognition for playing a villainous role. But a lesser known fact is that it was inspired by the 1991 American movie directed by James Dearden.

The 2004 Saif Ali Khan and Rani Mukerji starrer movie was directed by Kunal Kohli. It was inspired by the 1989 Rob Reiner directed romantic comedy When Harry Met Sally which served as the go to reference for any boy-meets-girl rom com made ever after.

In 1982 came out a Raj N. Sippy directed movie starring Amitabh Bachchan and Hema Malini which was loved by all. What served as its inspiration which in other words meant copying the plot line was the 1954 American musical romance Seven Brides for Seven Brothers directed by Stanley Donen.

The David Dhawan directed 2007 movie starring Salman Khan and Govinda was a rather poorly made rip off of the 2005 Will Smith starrer Hitch directed by Andy Tennant.

Well the name says it all. The Uday Chopra, Jimmy Shergill and Bipasha Basu starrer 2002 movie directed by Sanjay Gadhvi was a copy paste of the 1997 Julia Roberts, P. J. Hogan directed movie to an extent that even the title was just a literal translation.

The 2003 Christmas themed romantic movie directed by Richard Curtis was made into Salaam-e-Isha by Nikkhil Advani in 2007. Both movies were multi starrer as they revolved around stories of various individuals. And it’s safe to say, the Indian remake let down the audience.

This official remake of the 1963 American comedy directed by Stanley Kramer was an epic ride and did complete justice. Dhamaal came out in 2007 and was directed by Indra Kumar.

The Kajol and Sanjay Dutt starrer crime thriller directed by Tanuja Chandra came out in 1998. What gave it an inspiration was the 1996 American psychological thriller Eye for an Eye directed by John Schlesinger.

The 1994 classic Oscar nominated The Shawshank Redemption directed by Frank Darabont served as inspiration for various movies. The 1997 Gupt directed by Rajiv Rai was one such movie. It starred Bobby Deol and Kajol.

Another unsolder mystery of Bollywood making sequels that have no connection with each other was the trilogy: Murder. Taking plot lines from various movies including an American, a South Korean and a Spanish movie respectively.

An uncredited remake of the 2005 South Korean movie directed by Kin Jee-woon, Awaarapan came out in 2007. It was directed by Mohit Suri and starred Emraan Hashmi.

This remake of the Spanish hit The Invisible Guest directed by Oriol Paula is equally gripping and gives you the classic edge of the seat moments as a thriller should. Starring Amitabh Bachchan and Taapsee Pannu, the movie was directed by Sujoy Ghosh and it came out in 2019.

An adaptation of the South Korean movie Ode to My Father (2014) directed by Yoon Je-kyoon, Bharat came out in 2019. It starred Salman Khan and was directed by Ali Abbas Zafar.

There are movies that make you wonder why. The 2012 Abhishek Bachchan and Sonam Kapoor starrer movie directed by Abbas-Mastan is one such. It is basically a frame by frame copy of The Italian Job, a 2003 heist movie directed by F. Gary Gary.

Another Christopher Nolan movie that inspired an Indian movie. Ghajini starring Amir Khan and Asin was directed by A. R. Murugadoss and came out in 2008 while Memento came out in 2000.

The 2005 Salman Khan and Kareena Kapoor starrer movie directed by Priyadarshan was a remake of the 1975 One Flew over the Cuckoo’s Nest starring Jack Nicholson which was directed by Miloš Forman. A rather badly made one, but a remake.

There are times when filmmakers consider the audience a little too dumb. The copy-paste of Christopher Nolan, The Prestige (2006) in the main lead’s track in the Amir Khan starrer Dhoom 3 was one such attempt.

The Salman Khan and Shilpa Shetty starrer 2004 movie directed by Revathi was quite inspired Philadelphia the 1993 Jonathan Demme directed movie starring Tom Hanks and Denzel Washington. No match to the original but it wasn’t that bad.

Another questionable movie is the 2006 Akshay Kumar and Katrina Kaif starrer movie directed by Raj Kanwar. Why would you attempt to copy the 1999 classic romantic comedy Notting Hill, directed by Roger Mitchell starring Hugh Grant and Julia Roberts.

The 2018 dark comedy, Andhadhun, directed by Shriram Raghavan starring Ayushmann Khurrana, Radhika Apte and Tabu was inspired by the French short film The Piano Tuner directed by Oliver Treiner that was released in 2010.

Read: FRIENDS Cast Net Worth: Who’s The Richest actor among all 6 of them??