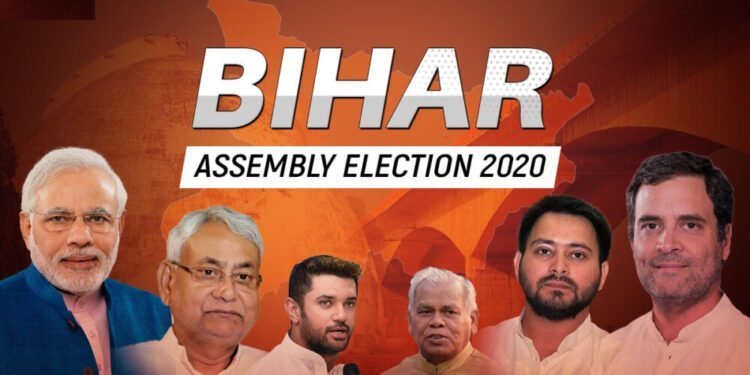 Bihar Assembly Elections 2020 are at its peak, and something that is exciting the citizens of not just Bihar but pan India is the fact of it being the first one after the Coronavirus took the entire world at a halt. A lot of things have to be taken care of to control an unruly public and their tempo during the rallies. Apart from these basics are some good new faces with some old ones that are stepping into the field of politics for the first time.

We here at TSA unbiasedly bring you 4 Young faces of Bihar we must look forward to. For some politics is imbibed in their generations and for others, it’s for the first time.

Son of the former CM of Bihar and the Union Ministry of Railway is the 31 years old cricketer turned politician. He was the deputy chief minister of Bihar from November 2015 to July 2017. Taking on his father’s legacy who has served as the CM of Bihar for 7 years, Tejaswi is ready to contest the 2020 Bihar’s Assembly elections for the second time and now is contesting for the post of Chief Minister.

Apart from the MLA ship from 2015, Tejaswi is also the youngest opposition leader in Bihar. He in the past has always made headlines questioning the existing Government of Bihar and CM Nitish’s narratives and moves.

An actor turned politician of Bihar is a 37 years old Chirag, son of Late Ram Vilas Paswan, a cabinet minister of Modi government, a President of Lok Janshakti Party and a face of Dalits in Bihar. Chirag was elected as a Member of the 16th Lok Sabha in the 2014 Indian General Election from Jamui constituency in Bihar.

He won the seat, defeating the nearest rival Sudhanshu Shekhar Bhaskar of RJD by over 85000 votes, while his father won from the Hajipur constituency. Both father and son duo 5 years ago won through their own Lok Janshakti Party. Chirag, who has an engineering degree and also tried hands in Bollywood, is a successful politician so far in Bihar clearly known for his ideas to make Bihar a hub of education. In 2019, he retained his seats securing a total of 528771 votes defeating his rival competitor Bhudeo Choudhary. He is the face of the Dalit community and runs an NGO called “Rozgar” which provides jobs on a daily and monthly basis to the youths who are unemployed. He isn’t contesting the elections, but his party’s candidates will represent the set ideas and narratives his father had for Bihar.

His party LJP which is BJP aligned in the Centre announced that it would be contesting ideally (independently) in the state. Chirag’s prior to the elections launched ‘Bihar First Bihari First’ campaign which promises to elevate all social discriminatory associations a Bihari faces outside the state because of the State’s backwardness. He promises to make Bihar a ‘number one’ state if the party comes into the play.

A 26 years old Dentist from Darbhanga, Bihar and an Alumni of Aligarh Muslim University is ready to contest the elections for the first time in Bihar which will mark his up-gradation from the Students politics to the State’s.

Maskoor contested the 2017 AMUSU Elections in AMU for the post of the President, and his powerful and thoughtful speeches fetched him the maximum votes. A common man with no political background aims to change the face of Bihar through compulsory education. He is contesting the elections from the Jale constituency from the Congress party against the BJP sitting MLA Jeevesh Kumar.

Apart from his pragmatic attitudes which are well known for, Maskoor has always made headlines in the AMU for his provocative speeches. He is known for protesting against the Citizenship (Amendment) Act of 2019 and also was amongst the prime faces when the Jinnah portrait issues came into the limelight.

A 29 years old Indian Shooter, a gold medalist at the 2018 Commonwealth Games and many silvers by her name is the daughter of Late Former Union Minister Digvijay Singh and Smt. Putul Kumari. This famous Ace Shooter is ready to contest the 2020 Bihar Assembly Elections from the Jamui constituency. Shreyashi joined BJP earlier this October and will contest against the sitting MLA of the RJD, MR Vijay Prakash.

She believes that Politics may be a career for many but her, it is a God-Given chance for rendering service to humanity. Even Chirag Paswan, who is the MP from her seat, has rendered his support towards her.

Singh who is into sports plans to build a sports complex in Jamui if she wins and aims to bring a “sportsmanship” to the politics.