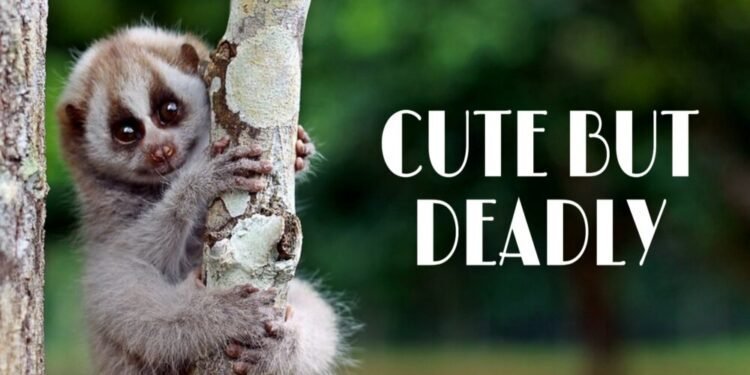 There is a famous adage which has been long in the tooth, “Never judge a book by its cover”. This is true for so many things, animals are one of them. Animals that look cute or adorable can prove to have deceiving looks. Their cute looking faces can have elements which can prove dangerous for you.

Today, TSA brings you 7 such cute looking animals which can prove to be deadly harmful to you.

Look at those eyes! Aren’t they so adorable?

But you should be very cautious around Slow Loris as this is one of the most poisonous mammals found in the world. Studies say that if it bites you, that may give you an anaphylactic shock or can sometimes lead to your death too. They have venom pouches in their arms which they take in their mouth right before biting you and their venom is as dangerous as a cobra. Scientists have also revealed that a loris resembles a cobra because of its bite, combined with a hiss-like vocalization, sinuous movements, and a distinctive defensive posture in which the loris raises its arms above its head, make the primate look remarkably like a spectacled cobra ready to strike.

Humans are most dangerous to the elephants contrary to the myth that they took us as their friends. We all consider them to be naive and gentle in behaviour, but the reality is a little different from what we perceive. When elephants find something bothering them, all they have to trample upon it to get rid of. And all thanks to their dangerously humongous size which makes this so easy for them.

Mute swans are territorial when it comes to their habitat, especially in their breeding period. And one must not dare go near their nests during those times. Because they can seriously injure you with their big strong wings. The wings of mute swans can even toss up a full-size dog. So, you can imagine, how dangerous they can be to you.

Pandas look super cute, aren’t they? But they should be adored only from afar because after all, they come from a family of “dangerous” bears. Though they don’t prefer flesh to eat, they can go attacking humans when the need calls for, and when they do that. Their claws and sharp teeth can give you some serious injuries which you surely wouldn’t like. Some of them can even prove deadly dangerous to you.

Ever in your lifetime, you get a chance to visit New Guinea and explore its forest, don’t be disguised by the innocence and cuteness of Pitohui bird. It is the only bird known to contain a toxin, called ‘Batrachotoxin’, in its body. The bird when touched with naked hands can make them go numb for any number of days. There have been instances, where numbness never died off. Therefore, it is expected of everyone out there who is reading this to not handle the bird rather stay at a distance and enjoy its echoing vocals.

One look at polar bears and anyone could easily find them super adorable. I personally feel an urge to hug them right away. Do you feel the same? If yes, you must not actually do it. Because their ferocious nature will get you in trouble. One thing you must know about polar bears is that they have a long muzzle like most of the carnivore mammals which facilitate them in biting their prey effectively. They are skilled apex predators; they can grab a human by arms and then knock its head off with a pawed fist. And you know the fun fact, they are the only known animals which like to chase humans and attack them just out of the fun. Well, let’s say it’s dangerous for us rather than a fun fact 😅 But the point is that they should be adored only in pictures.

Wasn’t expecting Dolphins on the list?  Well, they qualified to be here.

There’s this misconception that they’re very friendly creatures and not at all dangerous. Sure, there are cases when dolphins have saved the lives of humans but there are also cases where they have caused serious damages and proved to be fatal. That is because these cute looking creatures are exceptionally intelligent and resemble humans and just like humans sometimes can be very mean, so they do. If they’re not in a good mood then they might attack you, torture you and then bite you. And mind you, they are exceptionally fast and have sharp 80 to 100 teeth which they use to rip their prey apart. Dolphins are also known to kill the babies of other dolphins.  Apart from this, a hit from their beak (rostrum) can cause serious injuries even in a shark so you can guess what it might do to you.

After reading this, we at TSA advice you to have cuddling adorable soft toys of these animals if you find them really adorable. That’s good for you and your body 😉

5 Bollywood stars who went MIA soon after their hit debut

Science and Cinema: 5 biopics on the lives of new age scientists

Science and Cinema: 5 biopics on the lives of new age scientists