Ghibli movies are known for their heartfelt plot and magical experiences. Over the years, the films have managed to gather worldwide attention making anime more distinguished in the world of feature films. Here are the books that inspired the magical Studio Ghibli films. 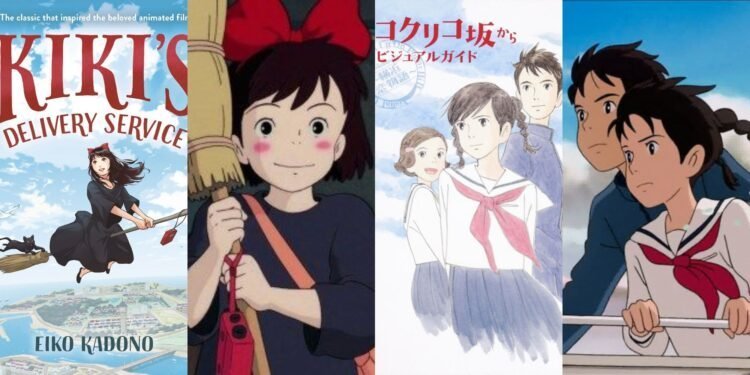 Studio Ghibli is an animation film studio founded and established in Japan. Founded nearly 35 years ago in 1985, the net income of the company exceeds ¥1.4 billion.

It is one of the most important hubs of animated content and is best known for its animated films. 5 of the studio’s films have received Academy Awards nominations, while Spirited Away won Academy Award for Best Animated Feature in 2003.

In 2014, the studio was suspended for a temporary period and was relaunched in 2017 following the release of a feature film called How Do You Live?

So, here are the books that were an inspiration behind the magical Ghibli films-

Kiki’s Delivery Service is a children’s fantasy novel written in 1985 by Eiko Kadano. The 1989 film of the same name created by Studio Ghibli is adapted from this novel.

It follows Kiki, a young witch who is thirteen and alone in a town without other witches and accompanied by her cat. She becomes a delivery person due to her unique ability to fly.

Both the novel and movie earned widespread recognition, and Kadano further wrote five novels in the Kiki series.

2. Whisper of the Heart

A manga that became the basis for the movie of the same name, Whisper of the Heart, is one of the most heartfelt and beautiful manga you will ever read and a movie you will ever see.

The animated movie revolves around Shizuku, a voracious reader and aspires to be a writer someday.

A series of events lead to Shizuku following a mysterious cat and landing among various marvels.

3. Grave of the Fireflies

A heart-wrenching short story was written by Akiyuki Nosaka, Grave of Fireflies which surrounds the period of World War 2 and the dreadful events that came with it.

It is said that the fiction was based on Nosaka’s personal experience of the war.

The animated film revolves around the life of a brother who is responsible for providing for his little sister after the two of them get separated from their parents following a bombing by the US.

4. The Tale of the Bamboo Cutter

This story has been told from time immemorial in Japanese folklore. Its origin dates back to the early 10th Century. Due to the ancient history of the story, the author is unknown.

It follows the life of a princess who was discovered in a stalk of the bamboo plant and came from the moon and gets adopted by a family.

The story has been made into a film named ‘The Tale of Princess Kaguya.’

The Borrowers is a fantasy novel written by the English author Mary Norton. It follows the story of a family made of tiny people who live in the walls of an English house and ‘borrow’ from the big people to survive.

In 2010, Ghibli studio made a movie based on the novel called ‘Arrietty.’

Written by the British author Diana Wynne Jones, Howl’s Moving Castle is a fantasy novel published in 1986. Studio Ghibli made an animated film of the same name in 2004.

It follows the story of a girl who meets a wizard living in a flying castle. However, one of the evil witches, due to the increasing proximity between Sophie and the wizard, casts a spell on Sophie, turning her into an aged woman.

The film received an Academy Award nomination for the Best Animated Feature.

Only Yesterday is a manga written by Hotaru Okamoto and Yuko Tone. It follows the recollection of memories of Taeko, who keeps on recalling things from her past as she returns home.

It explored a genre that was conventionally thought to be out of the area covered by animated films.

Although the film and manga remain underrated, it is one of the most beautiful films created by Ghibli studio.

8. From Up on Poppy Hill

Another series based on the manga of the same name written by Tetsuro Sayama, From Up on Poppy Hill, is set in 1963 in Yokohama following the story of Umi Matsuzaki– a high school teenager in boarding school who meets Shun Kazama and the two of them tries their best to save the school’s clubhouse.

The story is filled with the message of hope and finding your way from the complications of life.