We are in the midst of monsoon season, and while watching the clouds open up and rain on us, we are bound to recall the movie scenes and songs where it rained and brought us joy. 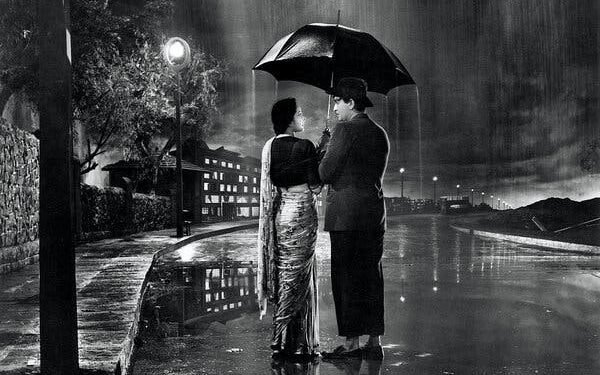 It never rains, but it pours at the movies, and nowhere is this more true than in Ridley Scott’s rain-soaked future visions in the cult sci-fi classic Blade Runner. Now that the clouds are open,   we pull out the umbrellas to count down 9 great cinematic scenes in Hindi cinema that have skilfully utilized rain.

Rain can be a very effective way of communicating a wide range of complex concepts and issues in the right circumstances. Emotions can be brought out, and they can also be concealed.

There are times where it represents joy and other times when it signifies sorrow. Writers have explored every aspect of its meaning over the years, and they have utilized it in countless films and events throughout the years.

Here are some of our favorite rain moments from Hindi Cinema when it was incorporated well in the story.

Tumbbad makes the most important use of rain as a narrative element in Hindi film history, treating rain as if it were a character in and of itself. It’s impossible to pick a favorite part in this film because it rains the entire time, and each scene is equally good.

From the beginning of the film, when Vinayak is a young boy growing up in Tumbbad, to his later travels to the village, a constant rainfall never leaves him, symbolizing the horrors of greed that would finally overwhelm him. It finally stops pouring in the final shot as his body disintegrates into ashes.

In Vijay Anand’s Guide, rain becomes the ultimate blessing once more. Residents of a drought-stricken community sit in a temple and chant to the Gods, which is seen in all its dramatic beauty.

With S.D. Burman delivering those prayers, the camera moves and, eventually, rain falls, bringing the film to a close. At this point, the protagonist, Raju, also sees the end of the storm.

In Swami, rain reflects the protagonist Mini’s carefree and fun-loving personality. Rain conjures up excitement and even dangerous images, yet it does not frighten Mini as much as it does to her mother.

She was confident enough as a young girl to embrace the life journey that lay ahead of her. Her pleasant moments in the rain contrast with her mother’s reprimand when she returns, possibly foreshadowing the fate awaiting her.

Rain, among other things, is associated with fertility and good fortune in India, particularly in states like Delhi, where it provides relief from the heat.

As a result, it seemed only fitting that the wedding in Monsoon Wedding is held in the rain, which brought feelings of fulfillment and anticipation of fresh beginnings.

Kaagaz Ke Phool, as tragic as it was, features one of the most natural “first meets in the rain” scenes for the protagonists. The dramatic components do not wash over the situation.

There are no gusts of wind or flashes of light, just two humans seeking shelter beneath a tree. “Aap apna garm coat kyon nhi laayin?” he inquires. “Zukaam muft milta hai, garm coat ke paise lagte hai,” she responds. He gives her a warm smile and wraps his coat around her.

Aisha’s character went through a whirlwind of emotions, hardships, achievements, and joys as a newcomer to the city. When Aisha is writing about a city that has fostered her and caused her grief, all she can think of is Sid, her person.

As Aisha and Sid reunite, the rain becomes increasingly crucial, symbolizing their letting go of all feelings and setting them free.

There’s something about first dates and train platforms that invite rain to create some of cinema’s most unforgettable scenes.

It would be a travesty if Mani Ratnam’s Dil Se’s opening shot was not included in a list about Bollywood’s rainy history. This scene, which Amar refers to as “Duniya ki Sabse Chhoti Prem Kahani” (World’s shortest love story), is sometimes overshadowed by the classic Chaiyya Chaiyya song that precedes it.

Ijaazat is about finding love and letting go of infidelity in marriage. Rain becomes a symbol for Sudha and Mahinder’s reconciliation in this film. In the film’s first few minutes, Mahinder and Sudha are shown seated in a railway station’s waiting area. Because it’s raining outside, Mahinder comes in soaking, and Sudha takes care of him.

They return to the same waiting room later, and Sudha injures herself again owing to the rain, which Mahinder endearingly soothes. The rain becomes such an important part of their journey that, towards the conclusion, when they reunite as an estranged couple in the same waiting area, the film’s absence of rhythmic rain is audible.

Also Read: Films With A Significant Focus On Their Portrayal Of Food That You Should Watch