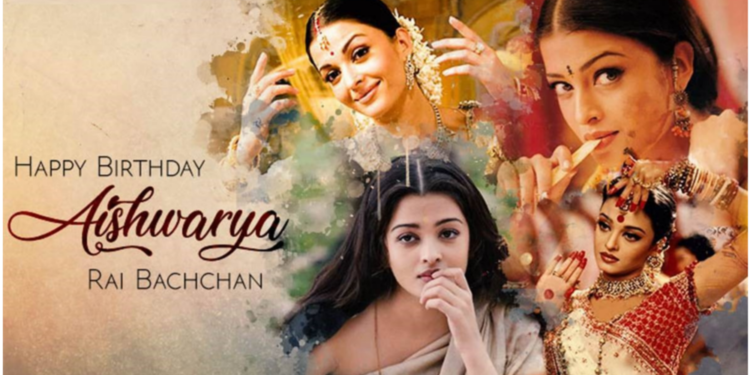 Today’s is the birthday of one of the Bollywood as well Hollywood acclaimed, most gorgeous, charming and talented actresses of all time—Aishwarya Rai Bachchan. Millions of her fans must be waiting in wonder how Aishwarya is going to celebrate this year. Aishwarya is admired worldwide for her acting and dancing skills.

Rai was raised in a conservative South Indian home and, when she was crowned Miss World in 1994, she was pursuing education in architecture.   The title put her on the modelling business’s fast track. With PepsiCo Inc., and Vogue magazine, she secured lucrative opportunities, and she signed up as a spokeswoman for L’Oréal Paris in 2003.

With praised roles in Iruvar (1997; The Duo) and …Aur Pyaar ho Gaya (1997; based on the 1994 American film Only You), her acting career actually began. Both films emerged from the simplistic paradigm typical of Bollywood movies at the time and helped raise Rai to the “Modern Bollywood” forefront.

Aishwarya Rai Bachchan has worked in various amazing movies in Bollywood as well as Hollywood. Let’s have a look at 10 best films of her to binge this November.

Sanjay Leela Bhansali has played an important role in giving Aishwarya Rai Bachchan that important film when nothing was going right for her in Indian Cinema. Her first taste of Bollywood success came with Hum Dil De Chuke Sanam, where Aishwarya was paired opposite Salman Khan and Ajay Devgn.

Not only with her fabulous lehengas but also her sparkling face, effervescent giggle and headstrong manner, Aishwarya Rai Bachchan as Nandini illuminated the big screen.

Directed by Mani Ratnam, Guru is set in the 1950s, depicting the tale of a visionary man and his road to success. Aishwarya plays the female lead. The movie was a box office superhit and Aishwarya- Abhishek pair was massively loved by the audience.

There are many films where Aishwarya coupled with her real-life husband Abhisekh Bachchan. Guru is one of them where we witnessed the romantic chemistry between them.

Again in Devdas, Aishwarya proved her strong mettle of acting with the iconic character of Paro opposite Shah Rukh Khan and had even received 48th Filmfare Awards for Best Actress.

Devdas was directed by Sanjay Lila Bhansali. It was the best film at the time. Aishwarya was seen flaunting her diva beauty in the film.

Aishwarya Rai Bachchan played the role of a perfect Queen Jodhaa to Akbar (Hrithik Roshan) in Ashutosh Gowariker’s historical drama, Jodhaa Akbar. The film showed a completely new side of Aishwarya, who outshone everyone with her Indian queen avatar and she was praised for her wonderful performance.

Although Guzarish did not ear much on the box office, but Aishwarya Rai’s performance in the film was highly praised. We also witnessed her different avatar in the movie. Aishwarya played the role of nurse opposite to Hrithik Roshan.

In addition to Aishwarya Rai, Indian and British actors Naveen Andrews and Indira Varma were featured in the Bollywood version of Jane Austen’s classic Pride And Prejudice. The story of Aishwarya Rai revolves around parents searching for their four gorgeous daughters a fitting groom. Lalita, the eldest sibling, the role played by Aishwarya, is determined to choose the man she loves and not anyone her family has planned.

In the Mistress of Spices, Aishwarya Rai played the role of Tilo. She is portrayed as a young lady, who runs a spice shop, reflects on the plot. She has a divine gift of insight into the lives of her clients that makes her give them any spice they desire. One day, she falls in love with an American man who enters her shop. When she has to choose between her gift and love, Tilo gets into a deep dilemma because if she chooses to love, her divine gift would leave her.

Aishwarya Rai played the dynamic character of Kiranjeet Ahluwalia, a Punjabi woman who gets married and travels with her husband to London. The husband is initially very loving, but when he sleeps with other women and beats her badly, things quickly begin to change. After 10 years of assault, an oppressed Kiranjeet resorts to killing him. This tragic novel, published in 2006, is based on a true case.

The movie portrays Aishwarya Rai as Mira, a martial arts master, based on an Italian novel of the same name. Mira was born to a family of warriors in India. She becomes a Byzantine Empire spy who must assist the Roman commander in planning Romulus Augustus Caeser’s escape from prison. In The Last Legion (2007) film, Rai stars opposite Colin Firth and Ben Kingsley.

Aishwarya Rai plays an antagonist in Harald Zwart’s, The Pink Panther 2, which is the sequel of The Pink Panther series that stars Steve Martin. Aishwarya Rai essays Sonia Solandres who is a criminology expert in the 2009 action comedy film. With its amazing plot twist and exciting elements, the spectators cannot move from their seat till the movie ends.