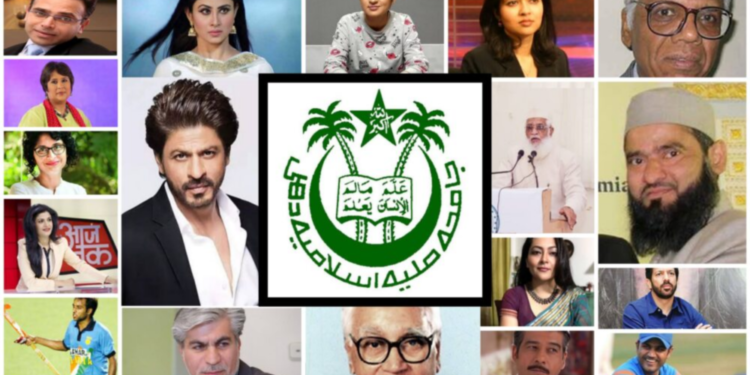 Jamia Milia Islamia, founded in 1920 in Aligarh, later moved to Karol Bagh and now stands at Okhla in Delhi has a history dating back to India’s Independence struggle. Hundred years ago, the University was established with the sole purpose of providing indigenous education in a national institution.

And while we celebrate the 100th foundation day, let us recall the roles of two people responsible for its foundation and sustenance. The university as we see today is the result of the Non-Cooperation Movement led by Gandhi. Mahatma Gandhi has a lifelong relationship with Jamia and talking about Jamia and not to mention the role of Gandhi Ji is inevitable. After his return to India, Mahatma Gandhi gave a call for non-cooperation movement to boycott all that was pro-British including educational institution, government services, foreign goods and refusal to pay taxes.

In 1920, Mahatma Gandhi visited Aligarh Muslim University and interacted with the students there. Influenced by Mahatma Gandhi’s non-cooperation ideologies four professors -Maulana Mahmud Hasan, Maulana Mohammed Ali, Hakim Ajmal Khan, Mukhtar Ahmed Ansari, and Abdul Majid Khwaja quit AMU for its Pro-British disposition and set up and indigenous and National institution Jamia Millia Islamia. However after foundation, the university began to face serious financial crises and in 1925 when it was on the verge of closing down Mahatma Gandhi insisted on its continuation and has been reported to have said to Ajmal Khan “apko rupaya ki diqqat hai to mein bheekh maang lunga” (if you’re facing a financial crunch, then I am ready to beg”).

Jamia Millia is not just a product of Gandhi’s call to boycott educational institution led by the British but an epitome of Hindu-Muslim unity which Gandhi believed in.

Shaikhul Hind Maulana Mahmud Hasan holds a unique position as the founder of Jamia Millia Islamia. Just like Mahatma Gandhi Mahmud Hasan was a freedom fighter and was actively working for the Independence of India from the colonial clutches of British. His “silk Letter Movement” or “Tehreek e Reshmi Rumal” is a talking example of his ideologies and his role in the Independence Struggle. Interestingly Mahmud Hasan was from Deoband an institution that was founded for the same reason.1920s is an important year in the history of Independence struggle with Gandhi’s call for non-cooperation and its merging in with the khilafat Movement and the foundation of Jamia Millia Islamia.

Mahmud Hasan was called for Jamia’s inauguration on 29 Oct and in his address, he said “ the foundation of an independent university which has nothing to do with government subsidy and interference and whose organization is based on Islamic principles and national aspirations”. It was this national spirit of Gandhi and Mahmud Hasan that became the founding principal of Jamia Millia Islamia and gave him the title of ‘Shaikhul Hind’.

Over the years Jamia Millia has marked its mettle in various fields. From film actors who are entertaining us in various forms to journalists who are an unbiased source of news, from sports to academics, from religious scholars to political persons, Jamia Millia Islamia has given us all.
Today, at the esteem occasion of the completion of 100 years, TSA has decided to take you all through the memory lane of the alumni of Jamia Millia Islamia, focusing on 15 of the hundreds of notable names.

Shahrukh khan who has given us classical hits such as ‘Dilwale Dulhaniya Le Jayenge’, ‘Kal ho Na Ho’, ’Kuch Kuch Hota Hai’, ‘My Name Is Khan’ and lots more graduated from Hansraj College in Delhi and Joined Jamia Millia Islamia for a master’s degree in Mass Communication.

Read:  SRK Once Again Won Our Hearts With His Wit

Indian Actress who rose to fame for her roles in TV shows, Mahadev and Naagin is an alumnus of Jamia Millia Islamia. She also participated in the TV reality show Jhalak Dikhla Jaa in 2014 and was among the finalists. She recently made her debut in Bollywood opposite Akshay Kumar in the film, Gold. Roy will be seen in the upcoming movie, Brahmastra which also stars Amitabh Bachchan, Alia Bhatt and Ranbir Kapoor in lead roles.

Nidhi Bisht is a casting director filmmaker, writer and actress. Bisht studied LLB from Jamia Milia Islamia. She practised law at Delhi High Court for more than a year and then gave up to venture in the entertainment field. She has acted in Umrika 2014 and Phillauri 2017 and is a famous face of TVF (The Viral Fever) which is Indian youth’s one of the most loved streaming platforms with entertaining original web series & engaging videos.

Naved Aslam is an actor and has acted in films, television and theatre. He is well known for his roles in many successful TV shows such as Pyaar Ki Ye Ek Kahani, Pavitra Rishta, Beinteha, and Ishqbaaz. He has also acted in the film ‘Once upon a time in Mumbai’. Aslam did his post-graduation in Mass Communication from Jamia Millia Islamia.

Harsh Chhaya is television and film actor who came to prominence after his soap opera Hasaratein in the 1990s. He has also done Bollywood film “laaga chunari mein daag”. Chhaya was also the part of Indian television political documentary series Pradhanmantri hosted by Shekhar Kapur.

Only Indian with two test triple tons and one of the three Indians to score an ODI double ton, Sehwag is an Indian right-handed batsman. He joined Jamia Millia Islamia in 1997 for his bachelor’s degree. He represented the country in 104 tests, scoring 8,586 runs at an average of 49.34. Sehwag was also in the Indian cricket team that won the 2011 world cup.

Check Sehwag’s message at the completion of 100 years of Jamia.

The son of Indian hockey player Ajit Singh, Gagan Ajit Singh is an Indian hockey striker. Gagan was the captain of the junior hockey team and led the team in 2001 junior hockey world cup. Gagan studied at Union Academy School and Jamia Millia Islamia. Gagan has made the Nation proud by his outstanding performances in the national game. He was honoured with Arjuna Award for his contribution in the year 2002.

Qasmi is an Islamic Sunni scholar and the founder of Al-Noor public school, Sambhal. His Alma mater include Darul-Uloom Deoband, Jamia Milia Islamia and Dehli University. Qasmi has written around 50 books and articles. His website was released in Riyadh and he writes on that. To provide authentic information about hajj and umrah Qasmi launched Hajj-e-Mabroor in 2015.

Siddiqi Was an Indian Sunni Muslim scholar and historian who recently died on 15th September 2020 at the age of 75. His notable works include ‘Tarikh Tezeeb-e-Islami’ and the ‘Prophet Muhammad: A role model for Muslim minorities’. He was a research assistant in the history department of Aligarh Muslim University and became a lecturer in 1977 and later became a professor of Islamic studies in 1991. He did his B.A. and B.ED from Jamia Millia Islamia and M.Phil and PhD from Aligarh Muslim University.

Kiran Rao, the wife of Bollywood actor Aamir Khan, is a Hindi film director, producer and screenwriter. Kiran had begun film making by assisting directors on commercials and films. Some of which include Ashutosh Gowarikar’s Lagaan and Swades. She wrote her first script of Dhobi Ghat. Rao co-founded Paani Foundation as an initiative towards fighting drought in Maharashtra. She graduated with food science major from the Sophia College for Women. She attended the Social Communications Media course at the Sophia Polytechnic for two months, but then quit and got herself enrolled in Jamia Millia Islamia. From where she got her master’s degree in Mass Communication.

Kabir Khan is an Indian film director, screenwriter and cinematographer. He started his career with working in documentary films, and then made his debut in Bollywood by Kabul Express. His most famous work as a director is Bajrangi Bhaijaan. Kabir studied at Kirori Mal College of Delhi University, as well as Jamia Millia Islamia.

Arfa Khanum Sherwani is an Indian journalist, senior editor of ‘The Wire’. She did her diploma in journalism from Aligarh Muslim University and doctoral studies from Jamia Millia Islamia. She has worked as a news anchor for NDTV and Rajya Sabha TV. She is also the holder of Red Ink Awards. Recently she was honoured with Chameli Devi Jain Award for Outstanding Women media persons. Arfa has also worked with Aamir Khan on his TV project Satyamev Jayate. She covers issues of social justice with respect to religious minorities.

She is an Indian television journalist and columnist. She pursued her master’s degree in Mass Communication at the Jamia Millia Islamia. She did a remarkable contribution in the field of journalism and her report on the Kargil war gain much appreciation. Often referred to as Oprah Winfrey of India, Barkha Dutt was awarded Padma Shri in 2008.

She is an Indian journalist and anchor. She is one of the few reporters who were allowed an interview with the Indian Prime Minister, Modi. Anjana obtained a diploma in journalism from Jamia Millia Islamia. She is an executive editor at Aaj Tak.
Jamia Millia Islamia is not just an Institution but a Movement that was started way back in 1920 and produced Alumni in various fields that are serving the Nation and continuing with the legacy.
We congratulate each and every alumnus of this esteemed institution on its completion of 100 years.

4 Young Faces of Bihar Assembly Elections We Mustn't Miss On