When it comes to Game of Thrones, George RR Martin, as a great writer, understands how to keep his followers on their toes. Nobody knew what to expect from the epic's conclusion because the narratives of the TV episodes and novels were so dissimilar. However, what better way to remember those days than to reflect on and admire what our favorite prominent actors have previously accomplished? 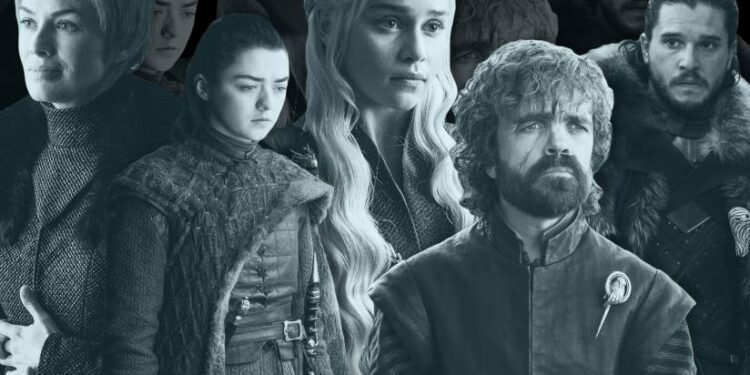 Despite its last season’s stumbles, Game of Thrones remains a pop culture phenomenon. While some are drawn to the show because of its violent fantasy setting, others are drawn to it because of its political intrigue or the complex world created by author George R.R. Martin.

With the release of the prequel series House of the Dragon, now is as good a time as any to delve into some behind-the-scenes information and discover a little more about the show that started it all.

Here are 30 Game of Thrones things you probably didn’t know!

1. Yara Greyjoy, who first appeared in the second book and season, is referred to in the books as Asha. To avoid confusion with Osha, her name was changed in the television show.

However, she is referred to as Asha in the German dub, as she is in the books. Even, to avoid confusion with Robert Baratheon, Lysa Arryn’s son Robert is given the name Robin in the series.

2. Carice van Houten, who plays Melisandre, and Liam Cunningham, who plays Davos Seaworth, are initially rivalled in the series. They did, however, previously co-star in the film “Black Butterflies,” in which they played lovers.

3. There was an unreleased pilot episode before season 1 aired and we all became familiar with the TV show after that. The unaired pilot was substantially different from the real first episode “Winter is Coming,” with the cast being the most noticeable difference. Young princess Daenerys, for example, was played by Tamzin Merchant instead of Emilia Clarke. In addition, George R. R. Martin, the author of the book series, played a Pentos nobleman with a massive hat!

4. Except for the family holding the Iron Throne, where the surname is solely inherited by birth and not marriage, women in Westeros normally acquire their husband’s surname after marriage. This is why consorts of monarchs and successors to the Iron Throne keep their names, as Cersei Lannister rather than Cersei Baratheon and Margaery Tyrell rather than Margaery Baratheon.

5. Producer David Benioff intended the Lannister anthem “The Rains of Castamere” to be the soundtrack. D.B. Weiss, a co-producer, persuaded him not to do it. And we’re pleased because the current theme song is incredibly unforgettable.

6. Alfie Allen, Richard Madden, and Kit Harington each sought to outdo one other in their shirtless appearance in the pilot episode, flexing and doing push-ups shortly before going on camera. You get to choose the winner!

7. The dire wolves (the Starks’ house symbol) were replaced in the first season by Northern Inuit dogs, a breed specifically bred for a wolf-like look. Real wolves were digitally composited into shots for Season 2 because dire wolves are reported to be significantly larger than typical wolves.

8. Kit Harington injured his ankle in 2012 after being locked out of his London apartment building and falling while attempting to climb the stairs to his flat. The production crew had to discover ways to shoot around the injuries during Season 3, which included using stand-ins in “Jon Snow wigs.” Harington felt so bad that he went out and bought a bottle of whisky for the production manager.

9. Around 160 newborn girls in the United States were legally called “Khaleesi” in 2012, after the character in the programme, however, it is not the character’s name, Daenerys, but a title that is the Dothraki equivalent of “queen.”

10. In the books, Daenerys had purple eyes, but the contact lenses Emilia Clarke wore interfered with her performance, so they were removed.

11. When Thomas Brodie-Sangster was cast as Jojen Reed a 13-year-old, he was 22 years old in real life.

13. Carice van Houten, who played Melisandre, may have played Cersei Lannister. She was requested to audition for the role of the queen, but she was unable to do so due to her filming commitments for “Intruders.”

14. John Harington, a significant man in Queen Elizabeth I’s court and the inventor of the flush toilet, is claimed to be Kit Harington’s ancestor. Kit further claims that it is because of his family that people sometimes refer to the toilet as “the john.”

15. Several of the show’s characters, according to George R.R. Martin, are better written and performed than their equivalents in the books. He singled out Natalia Tena for the role of Osha and Sibel Kekilli for the role of Shae, even adding that “her Shae was greater than (his) Shae.”

16. According to Executive Producers David Benioff and D.B. Weiss, the show’s production, is a tremendous operation. It lasts a whole year, and they film it like a ten-hour movie. Season 5 alone was shot over 240 days in five countries, on 151 sets, with 166 cast members, over 1,000 crew members, and over 5,000 extras.

17. Everyone on the programme recalls actor Jack Gleeson as a pleasant and friendly person, in stark contrast to his portrayal of the vicious Joffrey. He also has a close friendship with Sophie Turner, whom he frequently has to confront on-screen.

18. When fans meet Maisie Williams, who plays Arya Stark, they frequently ask her to recite the list of names Arya recites before bed (all persons who have caused her or her loved ones damage) and to add the fan’s name to the list.

19. With millions of dollars spent per episode, it’s no wonder that the show is costly in every way. Even the petrified dragon eggs that first appear in season one before hatching into gorgeous creatures are a work of art. One of the three was given to book author George R. R. Martin as a wedding gift, to commemorate his marriage to his longtime partner.

20. “Game of Thrones” has a devoted following around the world, and Barack Obama is one of them. According to Liam Cunningham, who plays Davos Seaworth, the former US president approached one of the directors after season 5 aired and inquired about Jon Snow’s fate. Obama once requested to see the first episodes of Season 6 before anyone else, according to the showrunners.

21. Iwan Rheon, who plays the wicked Ramsay Snow -ahem- Bolton, was originally cast in a completely different character. It was another bastard from the North, Jon Snow. Rheon and Harington were tied for the role of Jon at the end of the casting cycle, but the showrunners ultimately chose Kit. Iwan’s portrayal of Ramsay was very memorable, and probably for good cause.

22. The fight between Brienne of Tarth and The Hound, according to Gwendoline Christie, was the most difficult scene she ever filmed. She spent two months practising with swordmaster C.C. Smiff, 3-4 days a week, solely to get the strength she needed for her combat scene.

23. Despite being siblings, Cersei and Tyrion aren’t fond of one another, the actors who play them, Lena Headey and Peter Dinklage, get along smoothly. Dinklage and Headey are so close that when their shooting dates coincide, they share an apartment, travel to set together, and are routinely seen eating at neighbourhood pubs and restaurants.

Dinklage was also most likely the reason Headey was cast as Cersei, as he recommended her to David Benioff and D.B. Weiss, with whom he had previously collaborated on other projects.

24. Only one actor was ever considered for the role of Tyrion Lannister, although many characters were given life through a lengthy casting (and recasting!) process. Peter Dinklage was the first and only choice for Tywin Lannister’s youngest son by George R.R. Martin, David Benioff, and D.B. Weiss. Peter Dinklage won a slew of prizes, including an Emmy and a Golden Globe, so it was meant to be.

26. Lord Tywin’s treatment of his son was repulsive to Charles Dance. Dance kept apologising to Dinklage between takes because it was so bad.

27. Many individuals approached George R.R. Martin, about making a film based on his unfinished “A Song of Ice and Fire” series, but he turned them all down because he believed it would be too costly to create accurately. Martin asked the showrunners Benioff and D.B. Weiss one question that clinched the show’s fate when they told him they intended to make a series out of it.

The man behind the various twists and turns in the books wanted to know who they felt Jon Snow’s mother was. D.B. Benioff and Benioff Weiss’ response satisfies the author, and he sells the book’s rights.

28. Jack Gleeson, who plays the ruthless King Joffrey Baratheon believes that Joaquin Phoenix’s Commodus in “Gladiator” impacted his portrayal of the repulsive boy-king. The actor claimed that the sneer of Commodus was the most noteworthy attribute he tried to imitate when playing Joffrey.

29. Tywin Lannister presents an impression of power when we first encounter him in season one, skillfully skinning a stag (an allusion to Robert Baratheon’s destiny) while instructing his son Jaime about family and lineage. In the scene, actor Charles Dance was skinning a deer!

The day before they started filming, a butcher gave him a quick lesson in how to do it, and Dance says he did a fantastic job. The carcass was promptly dragged away once the scene was completed, so he didn’t get a great cut of venison.

30. Throughout the series, characters are shown wearing belts with a specific knot twisted after the buckle, which can be seen in most knights. The knot is accurate and was used in mediaeval times to secure leg armour portions to knights’ legs below the knees. It is commonly referred to as a garter. It is one of the insignia of the greatest chivalric order in England, the “Order of the Garter.”