Batman Fan? Here Are 10 Of The Best Joker Quotes From “The Dark Knight”

The Joker, played by Heath Ledger in The Dark Knight, is the most recognisable villain in any superhero film. Here are some of his finest lines from Christopher Nolan’s flick. 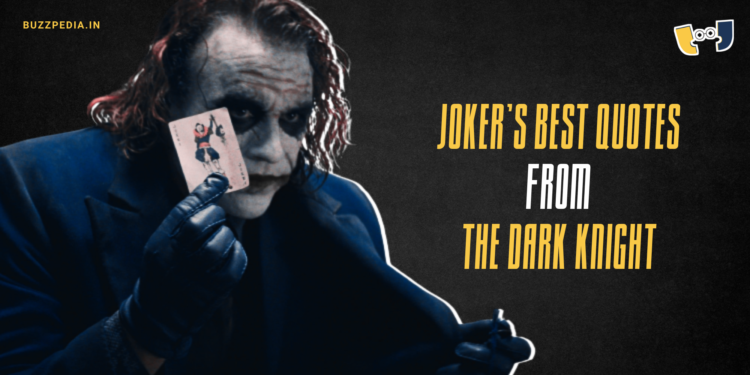 In the 2008 blockbuster film “The Dark Knight”, Heath Ledger’s portrayal of the Joker is one of the most enthralling depictions of a supervillain in film history. It also garnered him a posthumous Academy Award nomination, one of 15 for the Batman movies throughout the years.

The film, The Joker, has a lot of memorable lines. Here are ten of his greatest. 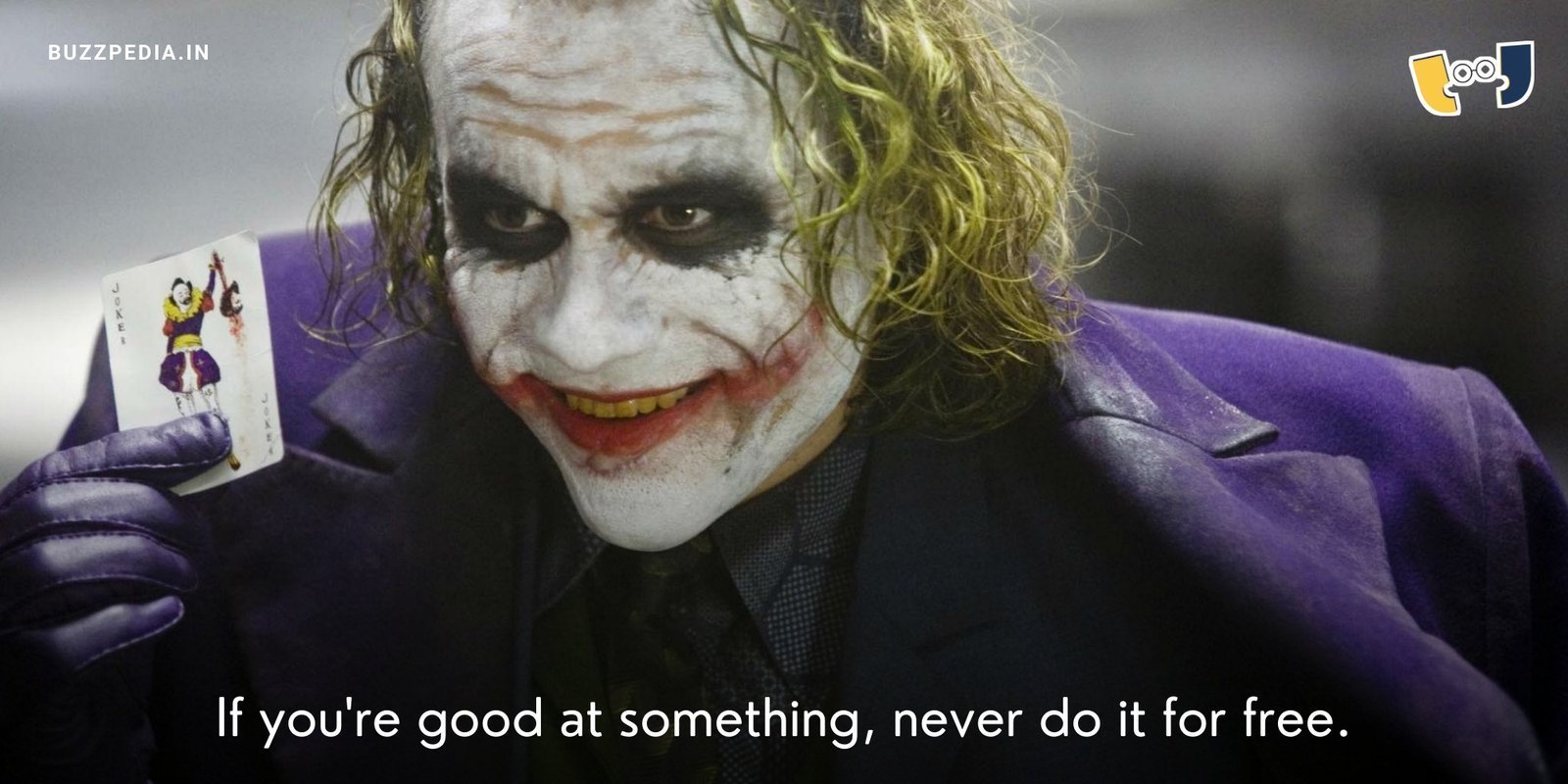 When the Joker interrupts a meeting of multiple mafia bosses to debate what to do about Batman, he first performs a “magic trick” in which he makes a pencil “disappear” by driving it into one of the boss’s underlings’ eyes. The Joker then offers a straightforward answer to their issues. Just take out Batman. “If it’s so simple, why haven’t you done it already?” the chief honcho, played by Eric Roberts, asks, and all other mafia bosses all laugh.

“If you’re good at something, never do it for free.” 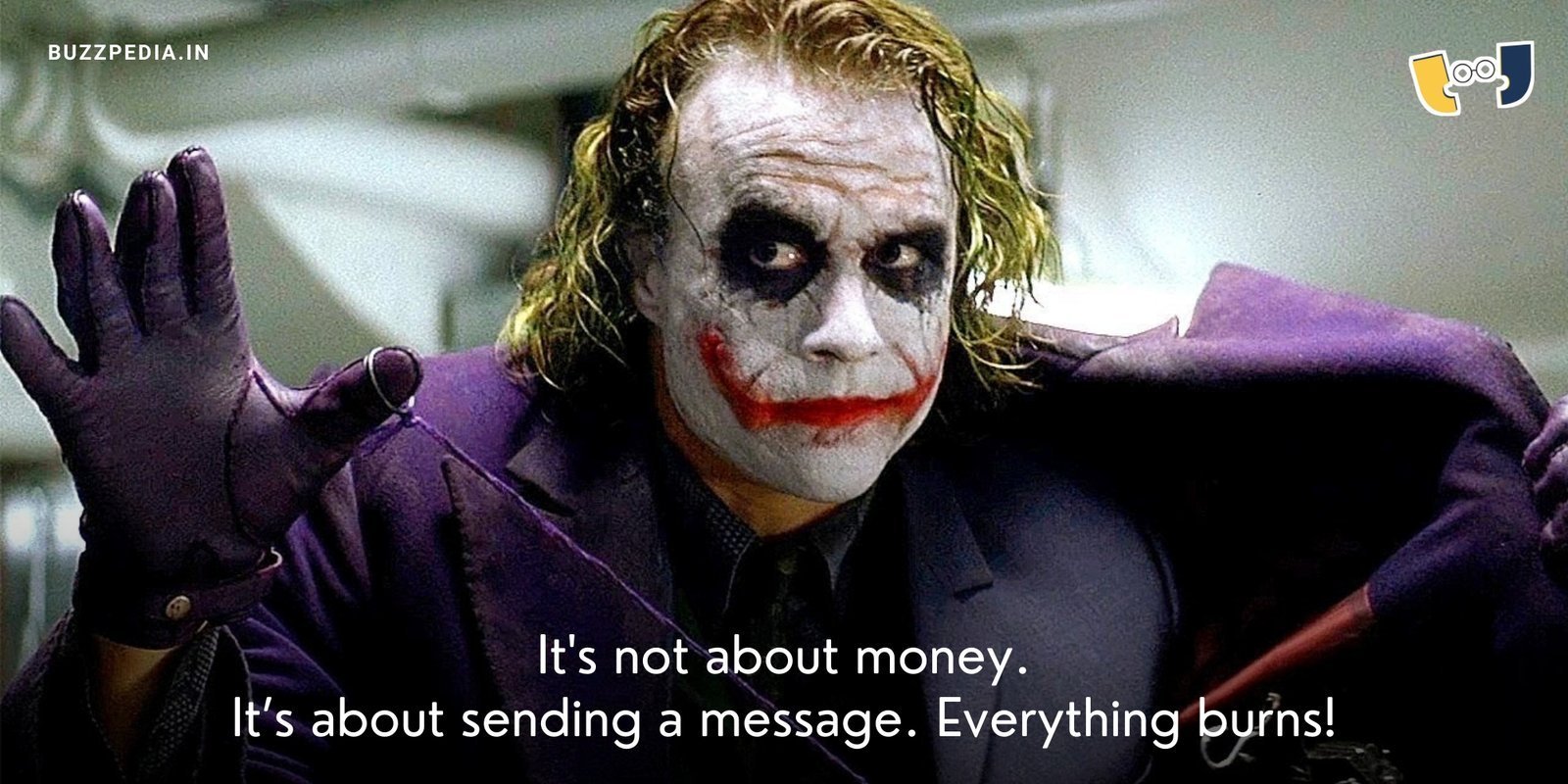 After the mob leaders accept the Joker’s offer of a pile of cash—literally—the clown-faced villain wants to make it clear that he is about revolting against all society, including criminal society. He shows it by setting fire to his large hoard and saying:

“It’s not about money… it’s about sending a message. Everything burns!” 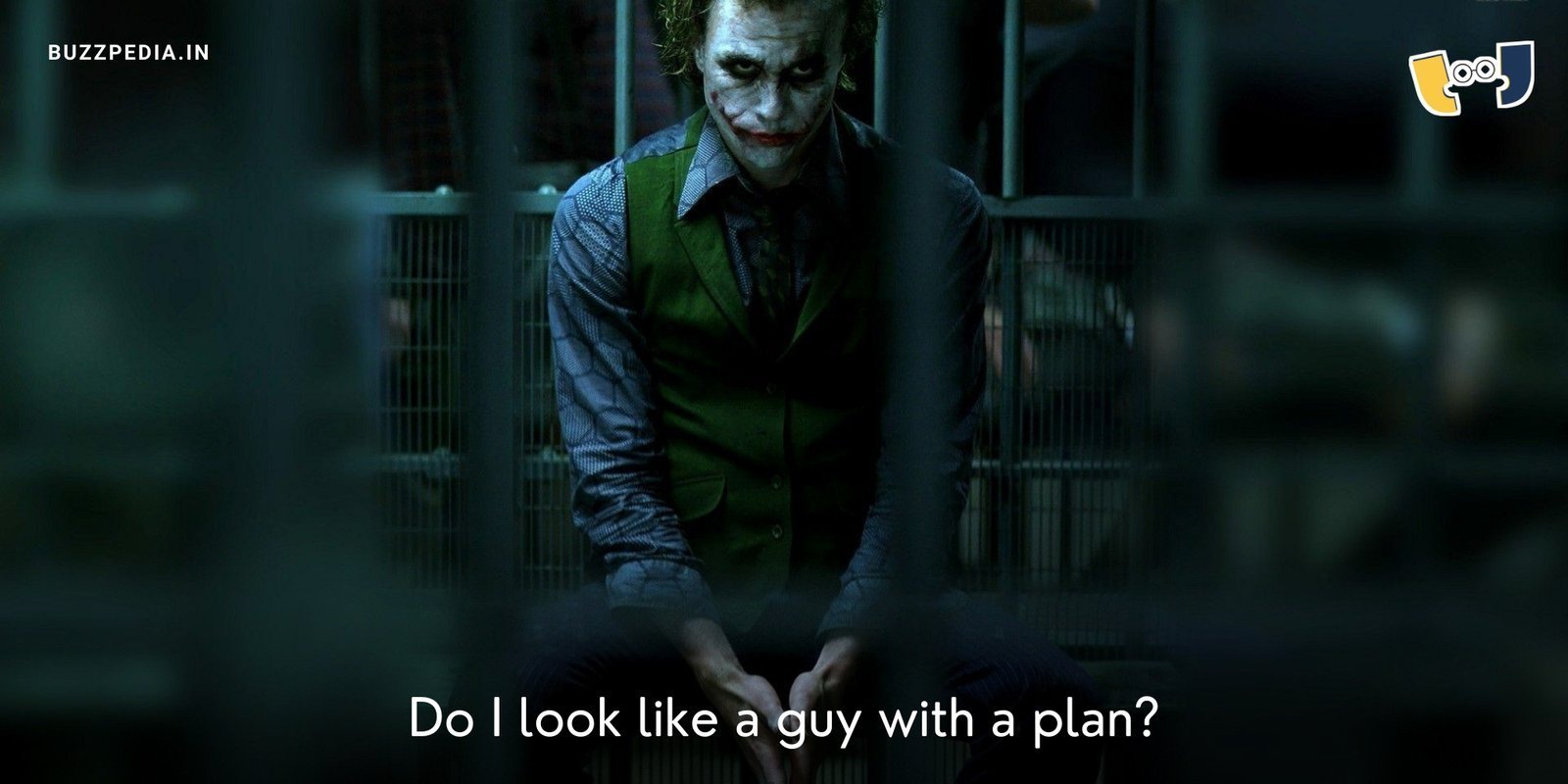 The Joker discusses his reasons to Harvey Dent during the iconic “hospital scene,” in which he disguises himself as a nurse and sneaks into the hospital where Dent is being treated and tells him:

“Do I really look like a guy with a plan? Do you know what I am? I’m a dog chasing cars. I wouldn’t know what to do with one if I caught it! You know, I just…DO things.” 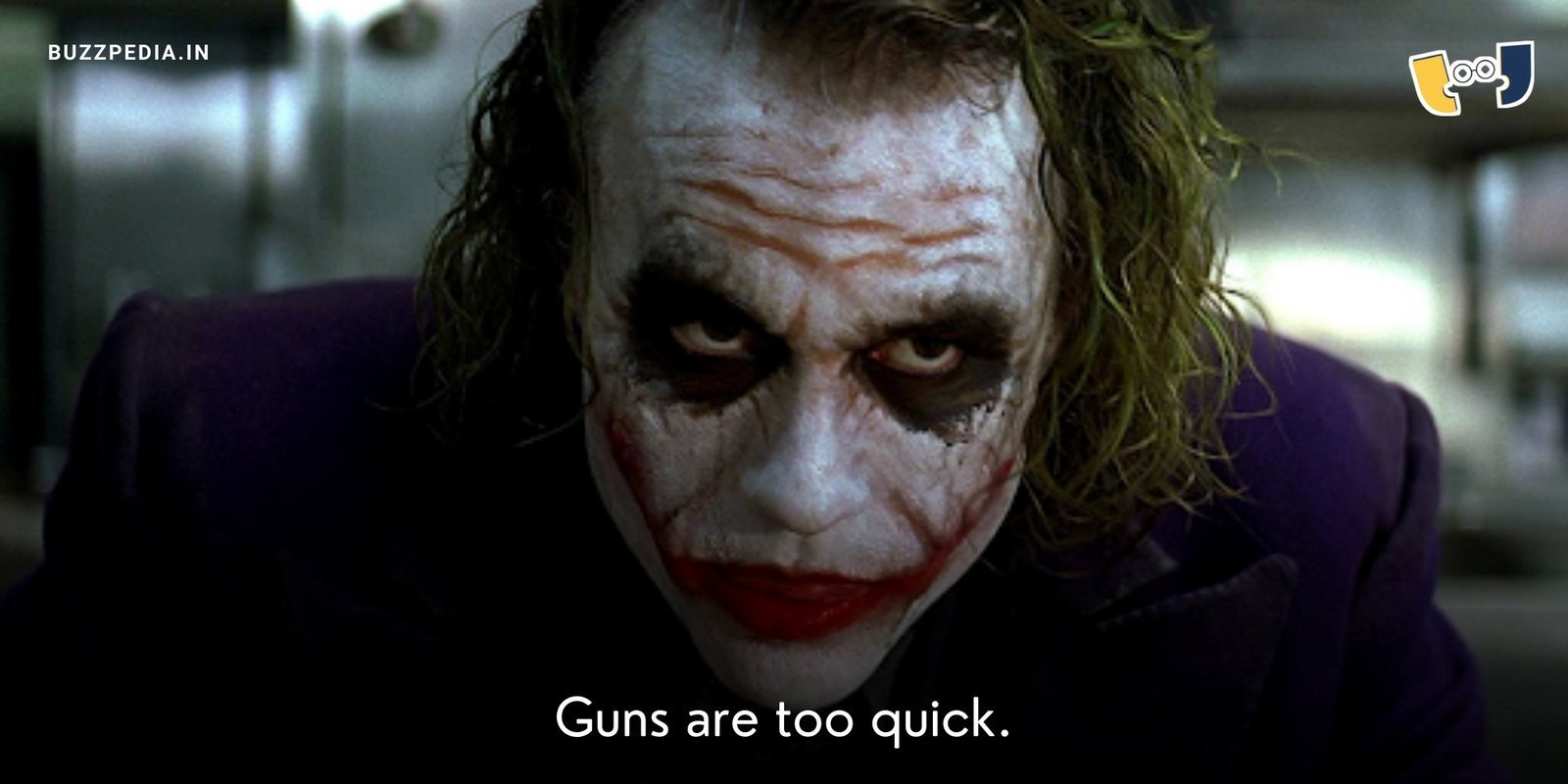 When Detective Gerard Stephens interrogates the Joker, the supervillain explains why he prefers knives to guns:

“Do you want to know why I use a knife? Guns are too quick. You can’t savor all the… little emotions…you see, in their last moments, people show you who they really are. So in a way, I know your friends better than you ever did. Would you like to know which of them were cowards?” 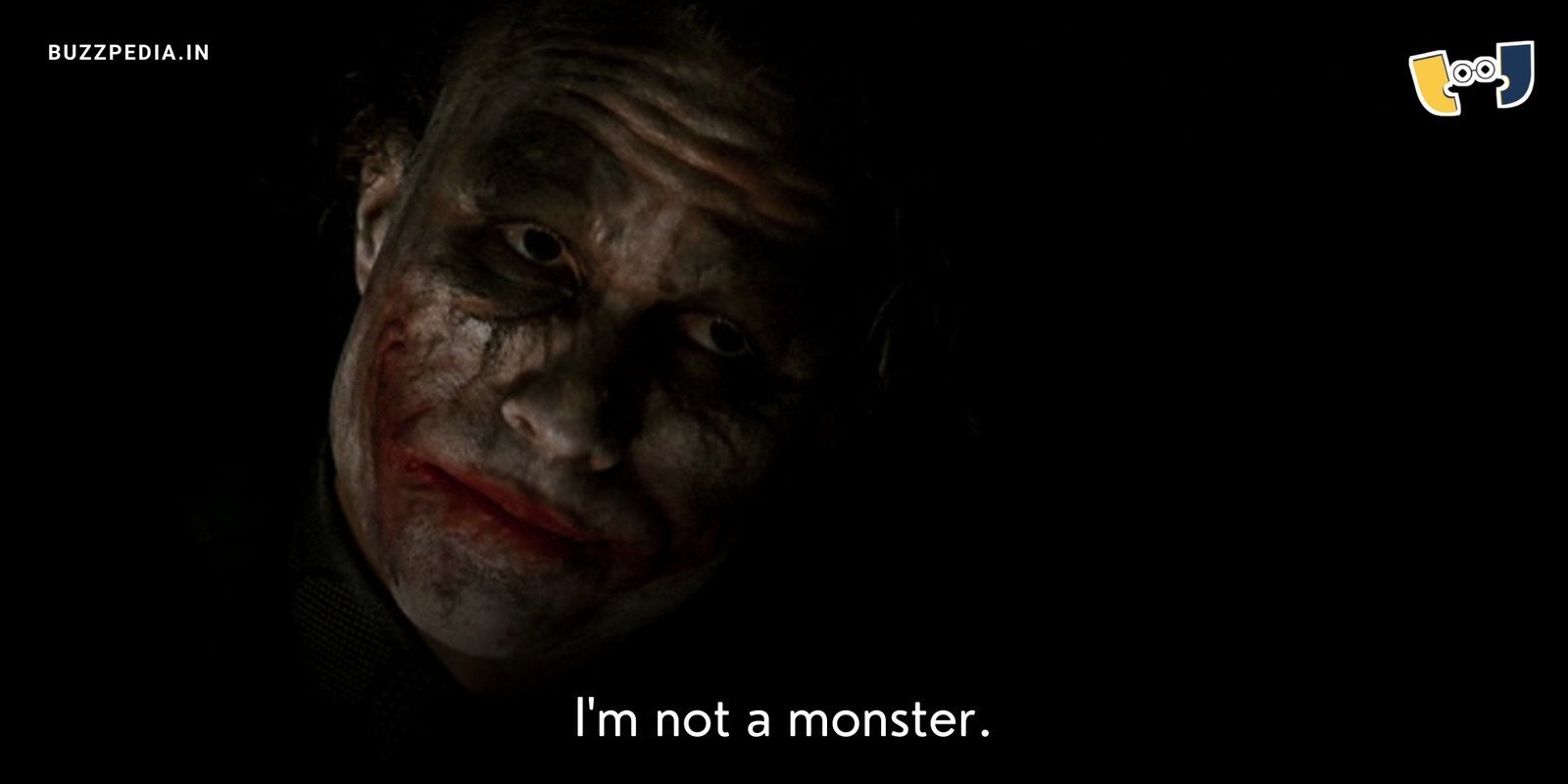 Eventually, Batman appears during the interrogation scenario, and the Joker informs him that he is not attempting to kill Batman. Batman, in fact, “completes” him. He is chastised by the Dark Knight, who refers to him as a monster. The Joker tries to justify himself:

“To them, you’re just a freak, like me! They need you right now, but when they don’t, they’ll cast you out, like a leper! You see, their morals, their code, it’s a bad joke. Dropped at the first sign of trouble. They’re only as good as the world allows them to be. I’ll show you. When the chips are down, these… these civilized people, they’ll eat each other. See, I’m not a monster. I’m just ahead of the curve.” 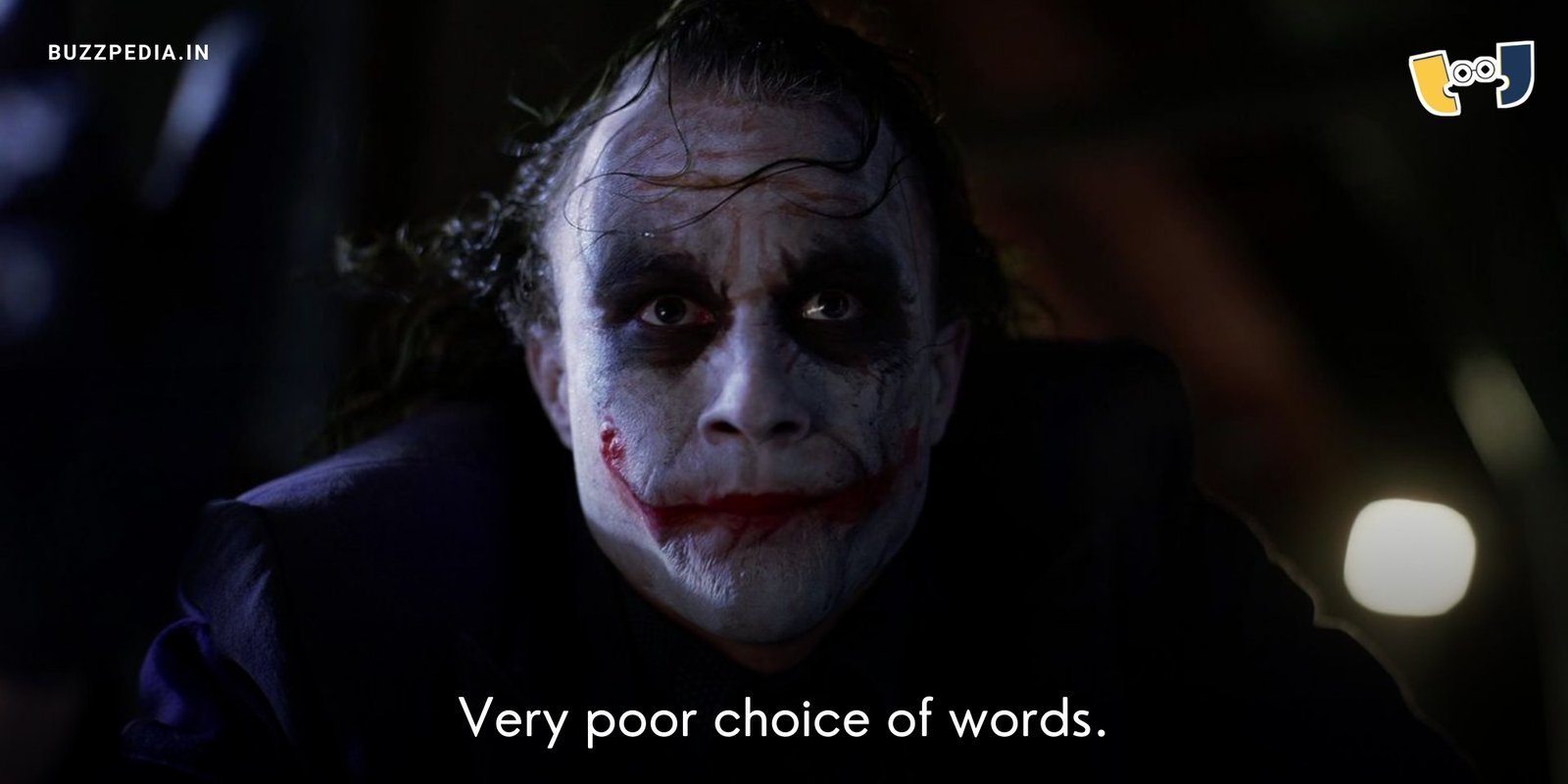 The Joker holds Batman’s longtime friend Rachel Dawes at knifepoint near a window in the scene where he interrupts a dinner party in search of Harvey Dent. When Batman arrives to help her, the Joker breaks the window and dangles Rachel from it. “Let her go!” yells Batman, and the Joker responds:

and drops Rachel from the window as he laughs. 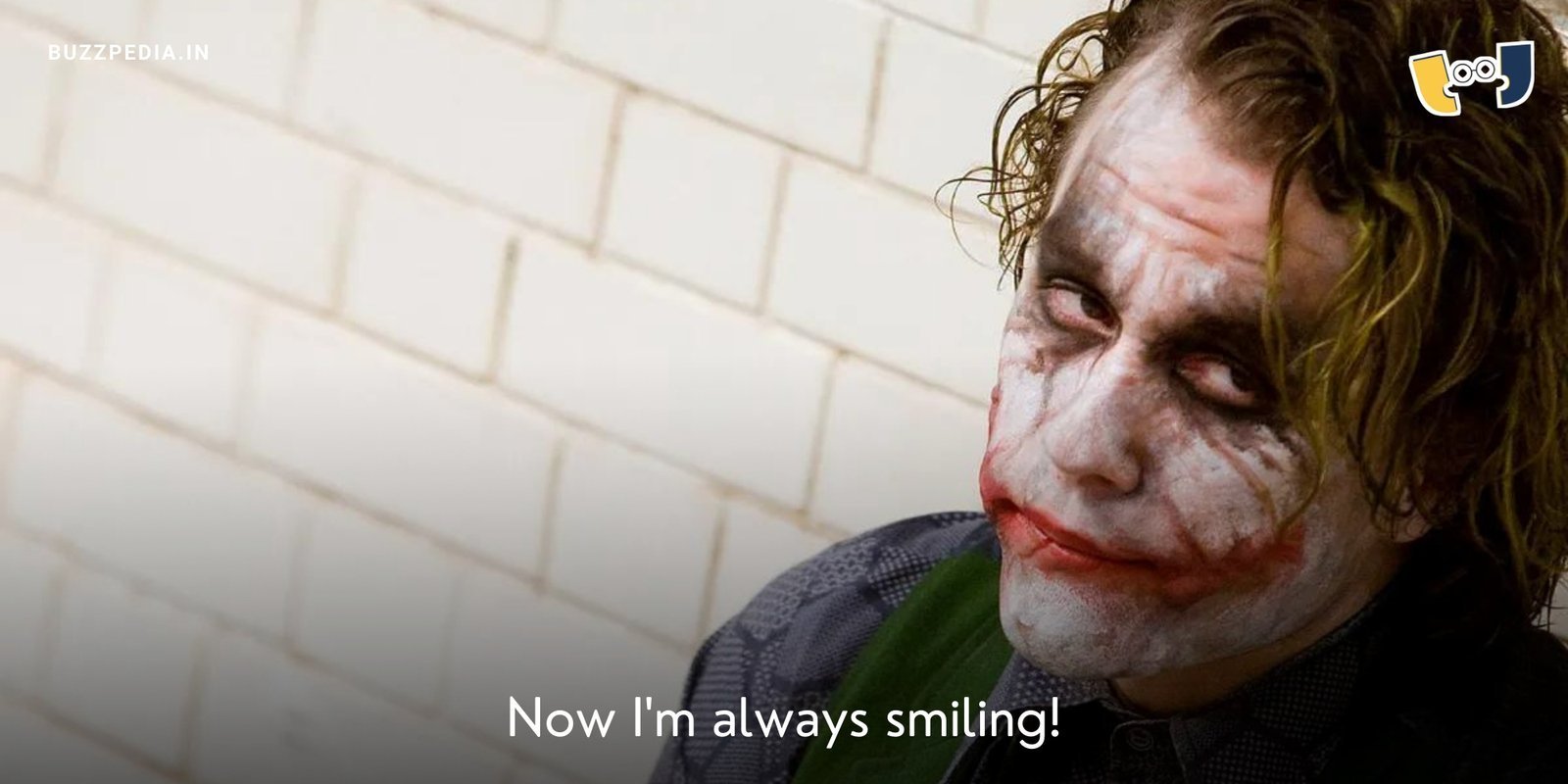 The Joker tells Rachel a narrative before Batman arrives to save her:

“Come here. Hey! Look at me. So I had a wife, beautiful, like you, who tells me I worry too much. Who tells me I ought to smile more. Who gambles and gets in deep with the sharks…look at me! One day, they carve her face. And we have no money for surgeries. She can’t take it. I just want to see her smile again, hmm? I just want her to know that I don’t care about the scars. So… I stick a razor in my mouth and do this…[he mimics slicing his mouth open]…to myself. And you know what? She can’t stand the sight of me! She leaves. Now I see the funny side. Now I’m always smiling!” 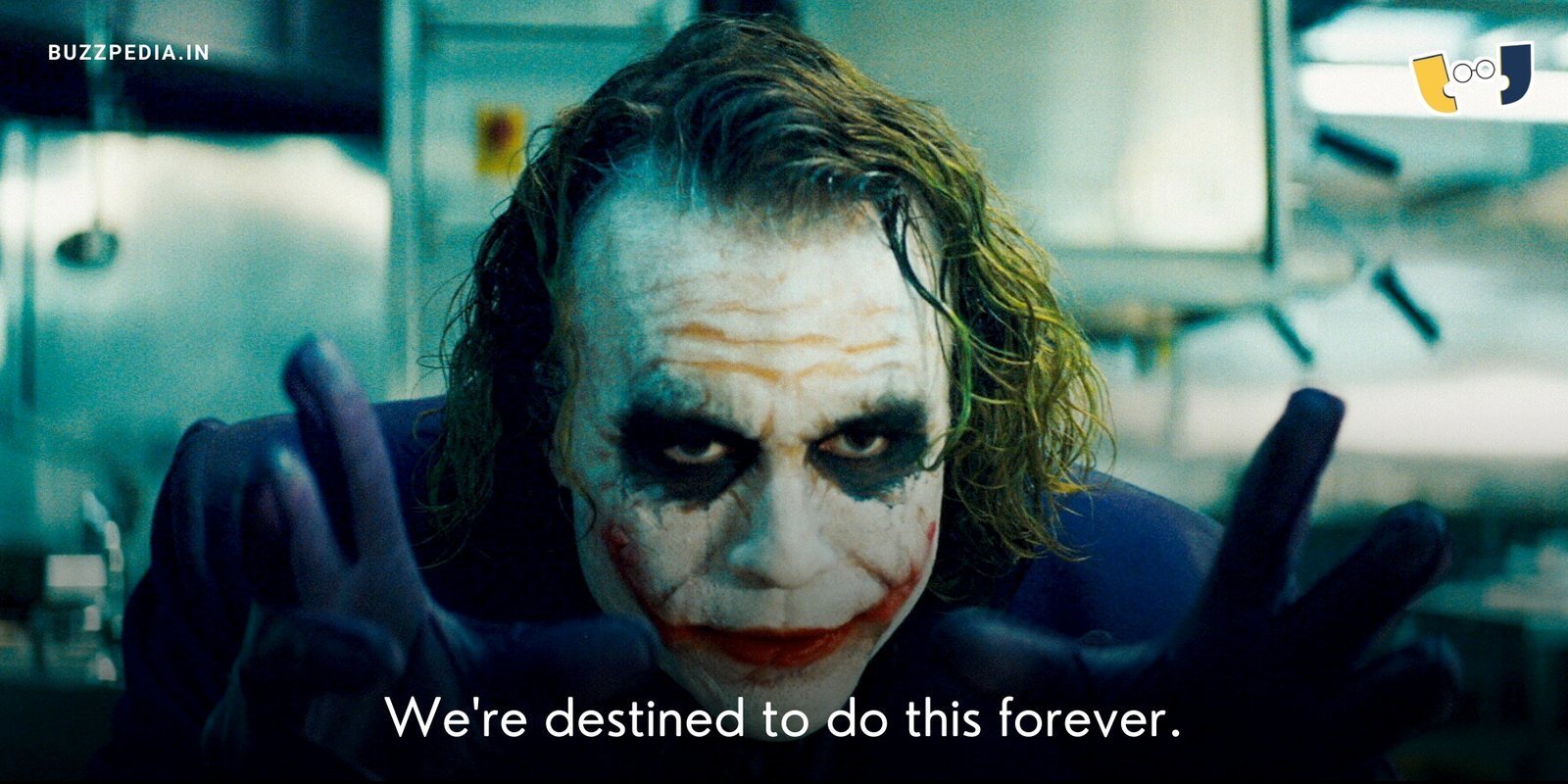 The Joker is now dangling near death towards the end of the movie. He mocks Batman while eloquently detailing their relationship:

“Oh, you. You just couldn’t let me go, could you? This is what happens when an unstoppable force meets an immovable object. You are truly incorruptible, aren’t you? Huh? You won’t kill me out of some misplaced sense of self-righteousness. And I won’t kill you because you’re just too much fun. I think you and I are destined to do this forever.” 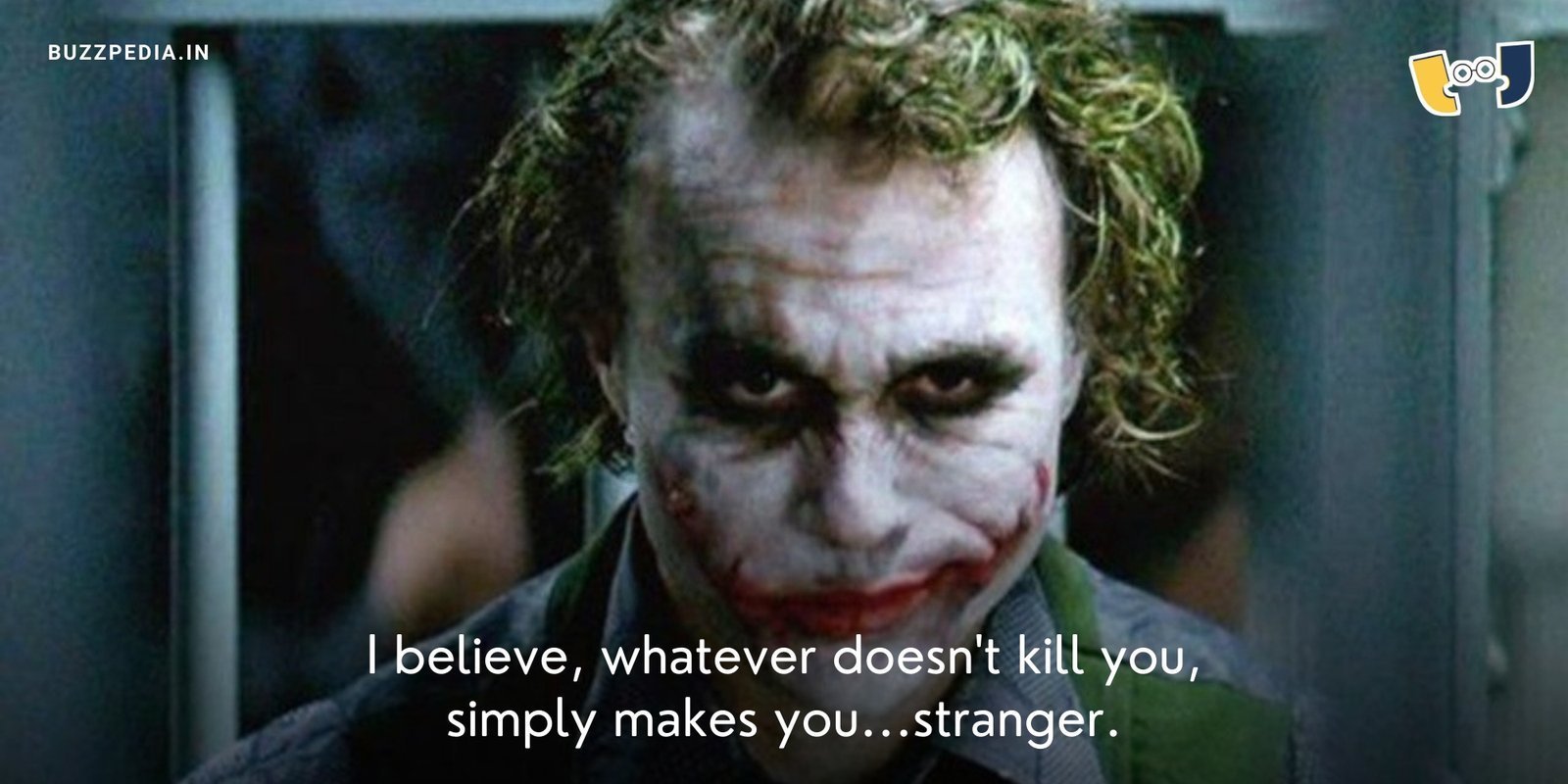 As he robs a bank, Joker’s first comments in the film are a perfect summation of his character:

“I believe, whatever doesn’t kill you, simply makes you…stranger.”

Isn’t that the Joker in a nutshell? 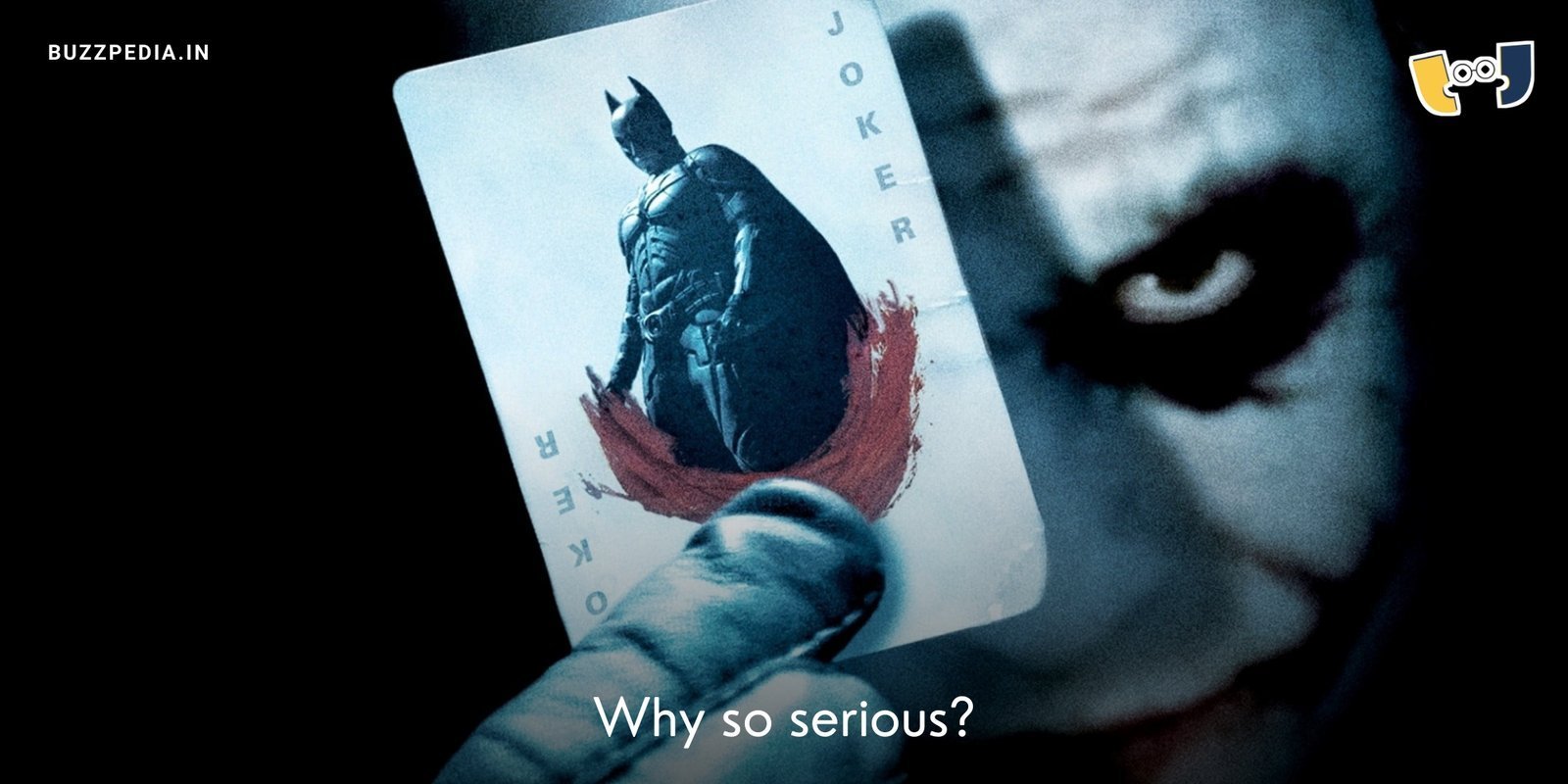 Gambol, a mob lord, has been at odds with the Joker for much of the film, and the Joker eventually fools him into believing he has killed him. The Joker then gains the upper hand and thrusts a knife into his face, claiming that this is his origin story. It is not important whether this or the story he tells Rachel is the true story. Heath Ledger delivers two of the most iconic lines in the Batman film franchise during this magnificent performance:

“Wanna know how I got these scars? My father was…a drinker. And one night he goes off crazier than usual. Mommy gets the kitchen knife to defend herself. He doesn’t like that. Not one bit. So—me watching—he takes the knife to her, laughing while he does it! Turns to me, and he says, “Why so serious, son?” Comes at me with the knife… “Why so serious?” He sticks the blade in my mouth… “Let’s put a smile on that face!”

The Joker then kills Gambol with the knife.

Loki, Marvel’s Unsung Anti-hero is Back with his Charms