Best known for playing Michael Scott, in NBC’s adaptation of the British series ‘The Office', Steve Carell has delivered some very memorable performances. Here’s digging into some of his best.

by Mahvish
in Listicles, Hollywood, Movies
1 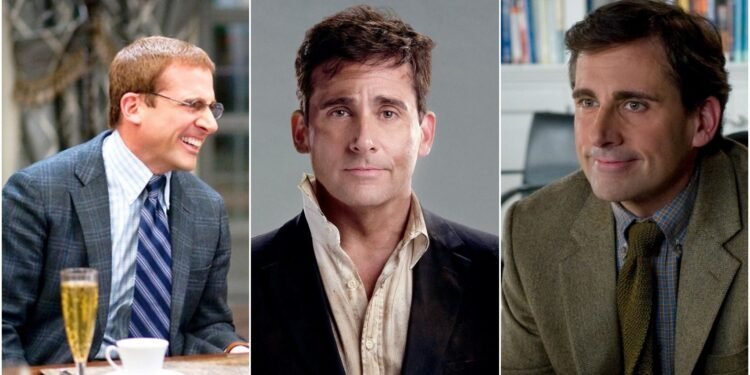 It’s not news that many actors are remembered for their most highlighted works, which overshadows the rest of their body of work. One of the flag bearers of this phenomenon is the American actor, comedian, writer, producer, and director Steve Carell.

Even if one hasn’t watched ‘The Office’, everyone knows him from the numerous memes of the show floating around on social media.

But what many don’t know about him is that he’s been a part of some very amazing movies.

Directed by Adam McKay, this is a story of the 70s news industry, which was male-driven and highly sexist.

Steve Carell, playing Brick Tamland, a meteorologist with an IQ as low as 48, brings up his funny side with some very memorable lines. It was this movie that allowed the world and Carell himself to see what he’s capable of.

Apart from The Office, this movie will be remembered as Steve Carell’s most memorable performance. His role of Andy Stitzer is bound to leave the audience in splits.

The poster itself tells a story that one would look forward to. It has some of the funniest moments that will always be a part of pop culture. Carell and director Judd Apatow co-write the movie.

The movie itself is such a fantastic watch that one can easily overlook Carell’s performance when looking at the movie as a whole. But his role as Uncle Frank, a suicidal man, is equally remarkable.

His subtle performance blends in with the other characters of the movie. This is one of those movies that wasn’t a great commercial success but is praised a lot.

It is bound to make you laugh and cry in equal measures, something that one would expect Steve Carell to be a part of.

This animated movie is loved for introducing the little yellow minions, who speak a language of their own that one can only decipher when they say ‘banana’.

But anyone who’s watched the movie cannot forget the minions’ master Gru, a reformed supervillain who later becomes a very loving father, husband, and even a secret agent. And Steve Carell deserves all the praise for the role.

While the movie is mainly remembered for Ryan Gosling and Emma Stone’s crackling chemistry, Carell does not stay any behind in catching the audience’s attention.

His character, Cal Weaver, a recent divorcee, learns all about confidence and picking women at a bar through his newfound friend Jacob (Ryan Gosling). His character, through his actions, leaves the audience with two thoughts:

This biographical comedy-drama tells the 2007-2008 US financial crisis with a lot of humor and detail. Including big names like Christian Bale, Steve Carell, Ryan Gosling, and Brad Pitt, the movie received a lot of praise and five Oscar nominations.

Carell’s character Mark Baum, a leader of an independent trading firm, is shown to be extremely frustrated with the conditions of the American banks.

His very believable portrayal deserves all the praise, and so does the director Adam MacKay for such great casting.

Many people find this movie to be too sentimental, but that is again a testament to how great of an actor Carell is.

His performance of David Sheff, a New York Times writer whose son is an unrepentant drug addict, is so convincing that one can truly feel the struggles of a father who is ready to go to any lengths to save his son.

It is a ride of emotions, and Carell’s performance only adds to the sentiments.