by Sami Majid
in Buzz
1 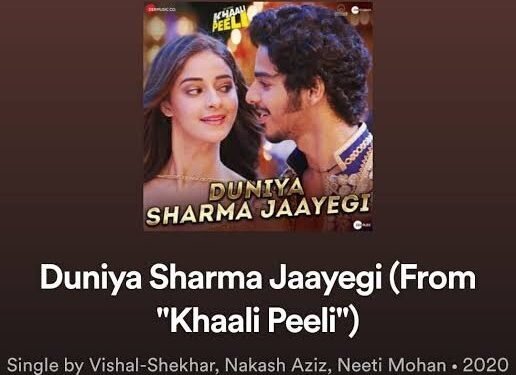 After receiving a spate of negative reviews over the recently released song “Beyonce Sharma Jayegi”, the makers of the film Khaali Peeli have acceded to changing the title of the song along with its lyrics as “Duniya Sharma Jayegi”.

The song featuring Ishan Khatter and Ananya Pandey, played in the voice of Nakash Aziz and Neeti Mohan was dropped on Youtube just a week ago, and ever since its launch, it has faced a severe backlash for its racist overtones from the viewers on multiple social media platforms. Read our report on the criticism of the song, here, in case you have missed this news.

Not letting the movie fall in a pit of controversies before its release, makers have played very smartly here in quickly updating the lyrics, so that no more viewers get offended to it now, and the fate of the movie remains out of bleakness. Talking about it the director, Maqbool Khan said, “We have made the film to entertain audiences and not to offend or hurt anyone. Since our lyrical arrangement did not go well with few people, we thought why not keeping the essence the same and change the song a little bit.”

The latest update in the song must be viewed with positivity now because recently so many movies, songs, and even trailers have faced the backlash of the audience as boycott, due to various reasons. On this account, this step of Maqbool Khan and his team should be seen as a welcome change in the present time. At least someone corrected their mistake instead of ignoring it.

But on the other hand, have the makers really realized their mistake? it doesn’t seem so because the fact remains the same even after changing the lyrics. The apparent problematic lyrics are still there in the song and netizens are making fun of this change by the makers of the film “Khaali Peeli”. The song doesn’t seem to appeal the listeners.

"Beyonce sharma jayegi" is now "Duniya sharma jayegi"
If ya'll think this solved the racism problem then you're just phony retards chasing social media clout. The racism issue lies in the use of the word "Goriya". But I dont expect so much IQ usage from #insta clout chasing fucks

Okay so after getting trolled by millions of Indians the song name is now
"Duniya Sharma Jayegi" instead of
"Beyonce Sharma Jayegi "!😂🤷
.
.
Moral ~Never underestimate the power of a Aam Hindustani 😆🤭 pic.twitter.com/m5rl0jmOtb

Earlier the name was changed to Beyonse Sharma Jayegi, couldn’t find the difference? Check the spelling of Beyonce.

It was in the news that the makers changed the name from “Beyonce Sharma Jayegi” to “Beyonse Sharma Jayegi”, in order to avoid legal actions against the film. Because Beyonce has got her name trademarked, which means that before using her name anywhere in any sort of content you would require her permission or else be ready to invite legal actions on yourselves.

It can’t get any worse.

Beyonce to Beyonse to Duniya, Change as many words as you want, we are not going to listen this song anyway. pic.twitter.com/eotZQ4EVXN

Looks like the song is still in trouble. Though on this whole matter, the director, Maqbool Khan on Thursday has said:

“First, without any hesitation or excuses we want to apologise to anyone offended. We assure you that the lyric in question was never intended racially. In fact, the term ‘goriya’ has been so often and traditionally used in Indian songs to address a girl, that it didn’t occur to any of us to interpret it in the literal manner,”

He added by saying,

“Also the comparison with Beyonce is simply meant to be a street-smart guy flattering a girl who is trying to impress that her dancing and performance is worth comparing to Beyonce, who we all see as the final word, the epitome of talent, beauty, performance, style and attitude. We are all huge fans, and there was never any question of disrespect.”

But the netizens don’t seem to buy his words. At this time, we can only hope and pray good for the movie and the team.

Please leave your views about this whole issue and the song in the comments section below. If  you haven’t listened to it yet, then listen to it on Spotify. Because the song with new lyrics video has not been updated on Youtube yet.