by Ifra Hussain
in Buzz, News
0 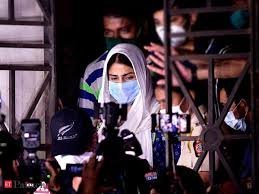 The mystery behind the death of Bollywood actor Sushant Singh Rajput still remains unsolved and is now investigated by CBI. His family filed an FIR against actor Rhea Chakraborty, denouncing her of abetment of suicide and financial fraud. Rhea is being investigated by the Central Bureau of Investigation, Enforcement Directorate and Narcotics Control Bureau for her alleged involvement in Sushant’s demise. While the investigation has turned into a trial by media, not one or two but many debates took place defaming her. Where on one side, “Justice for SSR” continues to trend on Twitter, with many speaking against them on their part, we have many in numbers who came in support of her from the Bollywood.

Actor-host Shibani Dandekar on Wednesday shares a post on Instagram in support of Reha Chakraborty in which she states that they both have known each other since she was 16 years old.

This post has received many positive responses from Vishal Dadlani, Lauren Gottlieb, Sussanne Khan, Maanvi Gagroo, Amrita Arora and many other.

I didn’t know Sushant on a personal level nor do I know Rhea but what I know is, it only takes to be a human to understand how wrong it is to overtake judiciary to convict someone who isn’t proven guilty. Trust the law of the land for your sanity and the deceased’s sanctity 🙏🏼 https://t.co/gmd6GVMNjc

Their supports have gained many people appreciation as well as critic.