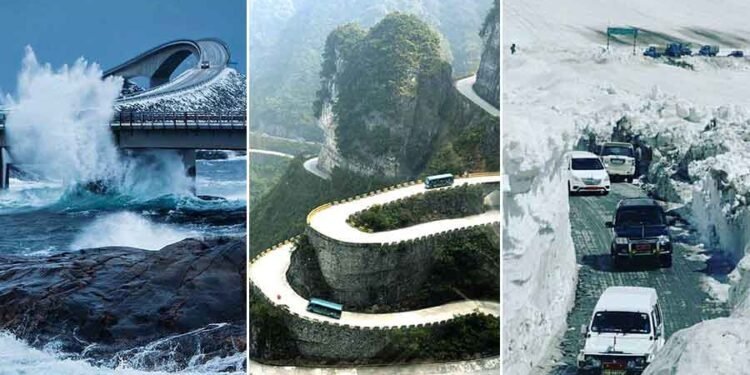 It is not an uncommon belief that the world is a place of adventures, and some adventures are prone to be unforgettable. Such perilous enterprises are provided by some almost impassable roads present in different countries across the world. Nonetheless, their fatal reputation is why they are still highly popular among tourists.

You must have been overwhelmed by the road movies? Or must have made plans with your friends to go on road trips at least once in your lifetime.

All the very best to you then, but mind it; there are some routes around the globe which you would definitely give more than a second thought before travelling through them.

Read on to know about 5 such riskiest roads which are hardest to traverse. They are terrifying yet thrilling.

With its fatal landslides, the Karakoram highway which runs between Pakistan and China is sure to get on the list of dangerous roads. The path with terrifying moments coupled with breathtaking sceneries is often referred to as the eight world wonder (as a marvel of civil engineering) and that makes it a popular tourist destination. But do not get excited because of its beauty. The road does not come without dangers. Besides having an ensemble of natural disasters including landslides, avalanches and heavy snow, the road is unpaved in Pakistan. Travelling here is certainly not for the faint-hearted.

Till death do you part! This is the accurate description for perhaps the world’s most perilous road ‘North Yungas’ for all the terrifying reasons you could guess. This brutal roadway connects Bolivia’s capital La Paz to the town of Corioro. To be on the safe side, we do not recommend you and exciting sport grille here because you just cannot do it. The road which barely gets wider than 10 feet has all the death elements in its composition including mountainous terrain, heavy fog, lack of guardrails, landslides, cascades and cliffs that drop 2,000 ft at every turn. No wonder it got the infamous moniker of “The Death Road” with around 200 people falling to their death every year.

This road has a lot of precariousness carved through it. Skippers Canyon in New Zealand with all the scenic beauties surrounding it is not without perils. The road which became a popular gold-mining area is mostly one way, unbelievably narrow and steep with sheer drops of several hundred metres. There are several warning signs which clarify that there is a little room for error on this road. Local car rental agencies do not even provide insurance for those who bottle up to conquer these dangerous roads.

The literal English translation for the milestone Guoliang Tunnel is “a road that tolerates no mistakes”, thanks to its roughly carved windows which overlook a deadly plunge below. As one of the steepest roads in the world, this creepy, claustrophobic road was carved out of the Taihang Mountains. This fearsome road has a story behind it. The road credits its existence to thirteen villagers who chiselled the 4000-foot path using only hand tools in the 1970s (although most of the villagers died during its construction).

This one is definitely not a Sunday drive. Karnali Highway located in Northwest of Kathmandu in Nepal is a vital transport link between two regions in Nepal. It is nonetheless a perilous roadway to pass and is said to be one of the most dangerous roads in the world. This high mountain area is rich in narrow stretches, landslides, rocks cliffs along with insufferable dust and potholes. In the monsoons, the area is hugely prone to landslides and avalanches. All these reasons have made the authorities ban the driving at night as the risk involved in travelling through it might invite colossal fatal accidents.

So, these are 5 most dangerous and impassable routes which are sure to give you both, a terrific and a terrifying experience. Travel them at your own risk. And till then stay tuned to us.