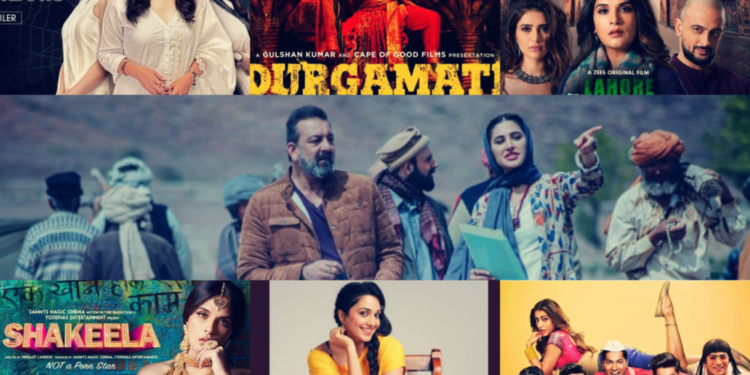 With December already started, this year will be ending but the entertainment will continue, if not on the screen then on the OTT platforms. December will cater to your festive mood, the Santa Claus of Bollywood have several releases including the two big films Coolie No. 1 and Durgamati premiering on Amazon Prime Video.
Despite the pandemic, two December releases will hit the screen in theatre as well. Here is the list of upcoming movies and web series.

Starring Swara Bhasker, Ravi Patel, Varun Thakur and Dolly Singh among others, the series premiere on Netflix from Dec 4. The plot revolves around Beanie who ditches her comfortably perfect life to become a stand up comedian.

Gitanjali Rao’s animated film Bombay Rose which was released in 2019 will be given a OTT platform on Netflix. It is based on true events and portrays the struggles of people who migrate to Mumbai from small town. The film is slated for Dec 4.

The Movie produced by Akashay Kumar is the remake of Anushka Shetty Starter ‘Bhagamathie’. It is horror thriller film with Bhumi Pednekar in a prominent role. The movie is set to release on 11 Dec on Amazon Prime Video.

It is a coming-of-age Comedy film starring Kiara Advani. The film also stars Mallika Dua and Aditya Seal. Despite the pandemic the movie is all set to hit the theatres on Dec 11, 2020.

Torbaaz is an upcoming thriller directed by Girish Kumar and have Sanjay Dutt, Nargis Fakhri and Torbaaz Dev as the lead. It is a story about army officer in Torbaaz who encourages kids in refugee camps to play cricket while terrorist have a plan to turn them into suicide bombers. The film will be streaming on Netflix from Dec 11.

It is a cross border romantic spy thriller by Kunal Kohli. Starring Richa Chadha, Arunoday Singh and Karishma Tanna, the film is set to release on 11 Dec  on Zee5.

A high octane, action packed drama of two officers trying to save Mumbai from COVID like virus. the web series stars Gashmeer Mahajani, Yudhishthir Singh, Rohit Chaudhary, Ashmita Jaggi, Kunal Pant and Pooja Gor among others. Shrikant Bashir will be streaming on  Sony Liv from Dec 11, 2020.

Black widows will premiere on Zee5. It is about three wives who plot the murders of their abusive husbands. The series is based on the Finnish drama of the same name. The series is slated for 18 Dec, 2020.

Coolie No. 1 is the remake of 1995 film of the same name by David Dhawan and produced by Vashu Bhagnani. Varun Dhawan and Sara Ali khan will be reprising the roles of Govinda and Karishma. The movie releases on 25th December on Amazon prime video.

The film directed by Indrajit Lankesh, is a biopic on South Indian actor  starring Richa Chadha as the adult actor from kerela who was among the biggest stars of the 1990s. The film is slated to have a Christmas release in theatres.

So these were the 10 movies/web series releasing this December, book your schedule and enjoy watching them.

Weekend movie marathon: 7 engrossing movies based on real-life on Netflix that you can finish off in just 15 hours