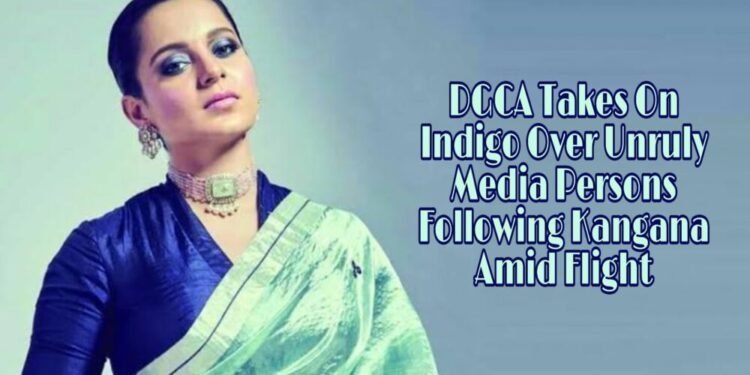 After the Quint’s reporter shared a video of media persons violating the safety rules aboard an Indigo flight on 9th September, The civil aviation body of India, Directorate General of Civil Aviation (DGCA) has now taken stock of the chaos that occurred inside the 6E264 Indigo flight due to several media persons were found trailing behind Kangana Ranaut from Chandigarh to Manali. DGCA has directed Indigo airlines to submit a report on the immediate basis on the ground of alleged violation of safety protocols even after the health protocols have to be adhered to as the pandemic is not over yet.

The Quint’s reporter anonymously narrated the whole story through a short video clip about what happened inside the aircraft when she was returning home in Mumbai, that too on the same flight in which actor Kangana Ranaut was flying along with several other media persons.

In the video, even the crew members looked helpless over the ruckus created after landing of the flight and one of them was seen making the announcement, “Please understand, we are all equal. Please do not disturb other co-passengers. Kindly follow the safety rules and please remain seated till the seat belt signal is not off.”

As per the words of the reporter, Kangana was sitting diagonally opposite to her in the flight, in fact, they both were not that far.

Reiterating the note from the Civil Aviation Ministry’s guidelines on social distancing while flying, issued on 25th May, it is to be ensured that “on arrival at the destination, the passengers should be allowed to exit the plane in a sequence so as to avoid any bunching.”

In response to the DGCA request, Indigo has issued a statement in which it clearly said, “We would like to reiterate that our cabin crew, as well as the captain, followed all the requisite protocols, including announcements to restrict photography, follow social distancing and maintain overall safety.”

To remind you, we have earlier seen a similar situation when stand-up comedian Kunal Kamra heckled his co-passenger, Arnab Goswami, on 28th Jan 2020 in a running Indigo flight, then that time he was banned by all the Indian airlines from traveling for the next six months. Now, when it is repeated again, it is to be seen what Civil Aviation and the airlines will do with Kangana and those media persons.

On the same lines, prominent personalities along with concerned citizens have tweeted on the incident.

You can access The Quint’s report here. Also, check out our entertainment section for more such updates of the entertainment industry.

Cargo: A Breath Of Fresh Air From The Mundane Bollywood With An Exceptional Collaboration Of Hindu Mythology & Sci-fi