Dhoom completes 16 years: Here are a few unknown facts about the movie

by Ifra Hussain
in Buzz, Listicles
0 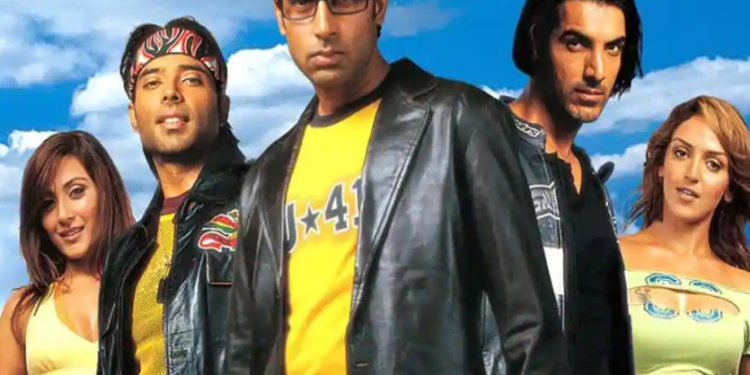 Abhishek Bachchan, John Abraham, Uday Chopra, Rimi Sen, and Esha Deol starrer Dhoom is one of the best action thrillers of Bollywood. The film released on 27th August 2004 and was a big hit at the box office. The budget of the film was est.₹110 million and its box office collection was est.₹724.7 million. The film became one of the top-grossing Hindi films of 2004. It was Abhishek’s first commercial hit. Not only Dhoom but the series of Dhoom were also blockbuster.

Some unknown interesting facts related to the movie are :

No bikes but the car.

Car was the first choice of director for the film but later the Director Sanjay Gadhvi thought that the youth will enjoy the bike chase sequences more.

Imagine Dhoom without a bike.

John Abraham was not the first choice.

John Abraham who played the antagonistic role in the movie was not the first choice. Yash Chopra wanted to cast Sanjay Dutt as the villain but due to lack of time, he was unable to be part of the movie.

There was two title track in the film, one featured Esha Deol and another one had Tata Young. Tata young sang her own part. But She had a problem while pronouncing Dhoom. She was pronouncing Dhoom as Doom.

The film’s concept came to Aditya Chopra while he was watching Kala Pattar (1979), one of his father’s action thrillers.

The inspiration behind Ali’s name.

The opening scene was shot in Africa but it was planned to be shot in Rajasthan.

Bikes according to personality.