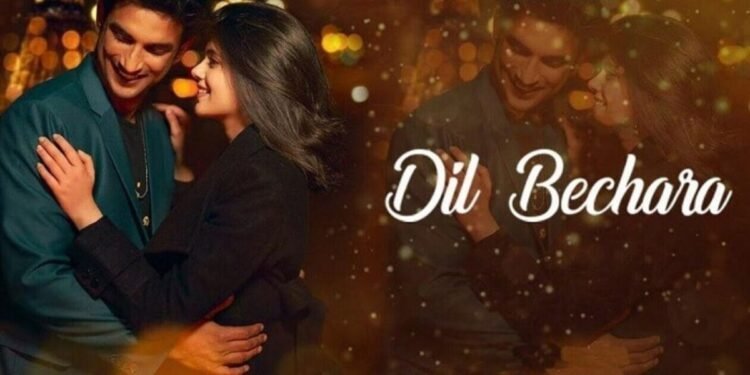 Fans are heartbroken and the nation is still in shock and grief after Sushant Singh Rajput’s sudden demise. Mourning this untimely loss, everyone is now waiting for the release of Sushant’s last movie Dil Bechara with bated breath. It was scheduled to be released on July 24 on Hotstar and Disney+ and we didn’t waste a minute to dive into the beauty of the movie.

With this disheartening incident, the unsightly face of the Bollywood has been unveiled. This movie is our one final chance to watch him in any movie ever, it’s his final on-screen appearance. So, watch the movie for the Kai Po Che actor’s charming presence, his sweet smile and pay tribute to the versatile actor.

As an outsider, Sushant has carved an area of interest for himself in the industry. With every film that he did, he showcased his remarkable acting skills.
DB is a reputable Hindi remake of the super-hit Hollywood movie ‘The Fault In Our Stars’, based totally on John Green’s popular novel of the same name.

Kizie Basu (Sanjana Sanghi) is a teenager suffering from thyroid cancer, which has affected her lungs fastening her to an oxygen cylinder. She craves for a normal life- one not occupied by PET scans, medicines and hospitals.

She meets Immanuel Rajkumar Junior aka Manny (Sushant Singh Rajput) at college and then at a support group for cancer patients. Manny- he is a box of energy, funniness and humour.

Like his other performances, Sushant has given a smashing performance in this one too as is seen from the trailer. Also, his personality in the movie seems extraordinarily one of a kind from his earlier videos and hence the audience will get to see something refreshing.

Swooning Manny slowly crawl to the trails of Kizie’s heart and hence begins the love story of one ordinary couple in the ordinary town of Jamshedpur with extraordinary circumstances. Shooting to complete a Bhojpuri film for their friend Jagdish Pandey who lost his eyesight during cancer – Kizie and Manny has a box of funny, lively and humorous moments packed for everyone.

In one scene, Manny takes Kizie to a particular spot festoon with old cars and buses. Over a bus they go, to the far end of the bench and from there you can see a lake filling your vision everywhere you see. It’s like you are not on the bus but standing on the lake filling in the beauty of nature. On the periphery of the lake is a forest covered with green trees – and that is one of the most beautiful moments in the film.

Life is not like a broken bus standing still taking in the beauty around it. It’s about repairing yourself from the damage and moving on – the bus has all the good and the bad part. It has the moment when Kizie and Manny were falling for each other “slowly at first then altogether” and it has the moment when they were fearing the loss of each other because “cancer doesn’t like happiness.”

Also read: Breathe- A Beautiful Look Into The Shadows

There is a peaceful aura in the film almost calm like. At some points, the movie weaved very fast, stopping not for a second to just stay in the moment. Abhimanyu Veer, Kizie’s favourite singer vanished after making his final album “Mai Tumhara” – and Manny who hasn’t been able to fulfil his dreams is ready to go to any extent so that Kizie can meet Abhimanyu to question him about the incomplete album.

What comes afterwards? Why is the album in incomplete? Did the singer lose the purpose of writing it? Or did he love someone who went away?
“Janm kab lena hai marna kab hai ye hum decide nahi kar sakte lekin use jeena Kaise hai ye hum decide kar sakte hain.”
This speaks of Sushant in the story of the film- no matter how much we try life will always be one step ahead, be one step behind and enjoy life until your final moment comes to you.

That’s what Manny did- Everyone has to die one day and we can’t clinch it with us forever, for a moment we have to let go of the fear of dying to live our lives wholly.

In life, positive matters are not in our palms however it’s we who can make the most of this existence by means of happily dealing with all the challenges. Watch the film for the effective vibes that the actor is spreading while taking part in his personality in the movie.

SSR fans all over the world are planning to make it a blockbuster. Are you going to stream the flick and pay tribute to the versatile actor? Do let us know in the comments.