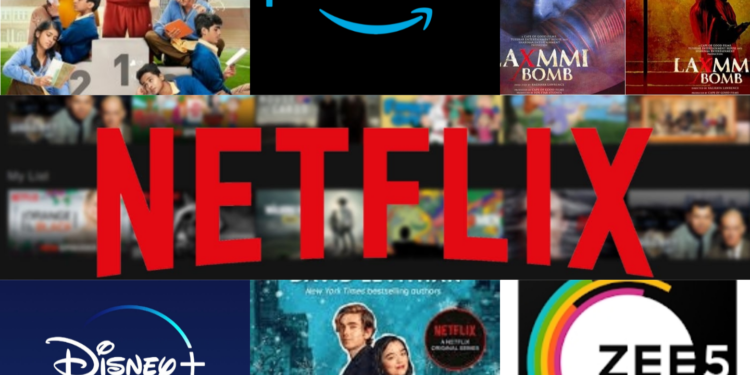 With so many movie/webseries releases this November on various OTT platforms such as Disney+ Hotstar, Netflix, Amazon Prime Video and others, it is unlikely to not binge-watch.

From Chhalaang, Lakshmi, Soorarai Pottru to The Crown, Paranormal, and Big Sky, November has come up with streaming shows in the varied genre of fantasy, thriller, Romance Comedy, Horror and psychological thriller to make our festive season kaleidoscopic and thrilling.

Are you ready to explore? Let’s see what we have in the list with us.

Oscar-winning Olivia Collman who made her debut in the third season of the Royal Period Drama series as the Queen will be seen in the fourth season as Elizabeth. Season 4 will also introduce Diana Princess of Wales played by newcomer Emma Corrin and Gillian Anderson as Margaret Thatcher. The fourth season of The Crown that spans from 1979 to 1990  releases on 15 Nov on Netflix.

The film Is based on the life of retired Army officer of the name Captain  G. R. Gopinath,  who founded Airline Air Deccan. The movie releases on November 12 at Amazon Prime Video.

The film tells four different stories and releases on 12 November on Netflix.

Hansal Mehta’s Chhalaang is about an unmotivated PT teacher donned by Rajkumar Rao. The movie also stars Nusrat Barucha and Zeeshan Ayuub in lead roles. The comedy-drama will be releasing on November 13.

Laxmi is the Hindi remake of the 2011 Tamil Horror Comedy Kanchana featuring Akshay Kumar and Kiara Advani as lead roles. Akshay Kumar portrays the character of a transgender and the film is centred around the prejudice and social injustice against the taboo. Laxmi has released today, 9th November on Disney+Hotstar.

This British drama is about young graduates fighting their way into London’s top finance industry. The drama is helmed by Lena Dunham and will be available for OTT on 9 November.

The inspiration for the romantic Comedy revolving around an optimistic Lily and cynical Dash is The young Adult novels written by Rachel Cohn and David Levithan. This holiday-themed series is all set to release on November 10th on Netflix.

The documentary of the young star titled, In Wonder is a cherished look at the life and journey of the pop icon. Interestingly it will premier on November 23rd, just a week before the release of Mendes fourth album, Wonder and is likely to cover footage of Mendes 2019 tour.

Netflix will be releasing Russo Brothers ABGO produced Iraq drama, Mosul. Mathew Carnahan has written and directed the movie. It is based on the true events of Nineveh SWAT team and their guerrilla struggles to save their home city of Mosul from ISIS. The drama releases on November 26 on Netflix.

Vannesa Hudgens returns yet again in the sequel of 2018 rom-com The Princess switch. If you are looking for refreshing genuine love this is the right pick for you. The movie is releasing on November 19th.

The thriller drama is based on 2013 novel The Highway by C. J. Box. The series is set to premiere on November 18. It stars Kylie Bunbury and Katheryn Winnick.

Hillibilly Elegy is the adaption of 2016 JD Vance’s non-fiction of the same name. It is a film exploring the Modern American Dream by a mother-daughter duo in Southern Ohio. The cast includes Freida Pinto, Freida Pinto, Haley Bennett, and Bo Hopkins. The movie is set to release on  November 24.

Featuring Divyenndu AKA Munna Bhaiya in the lead Bicchoo ke khel is set in Varanasi revolving around a writer whose life takes a turn when his father is killed in police custody. The film also stars Anshul Chauhan, Zeishan Quadri, Mukul Chadda, and Rajesh Sharma in pivotal parts and set to release on November 18.

Were you not worried About the festive season, wondering what will you do stuck in home in this pandemic? Well, with so many releases on OTT platforms this November there’s no point leaving the house at all.

Surround yourself with Indian sweets and enjoy the festival of Diwali binge-watching with friends and family.

Read: 5 TV Shows that you can binge-watch now since you are staying in!
Also Read: List of top 10 Richest Hollywood Actors | 2020

12 Signs That Your One True Love Is “Sleep”