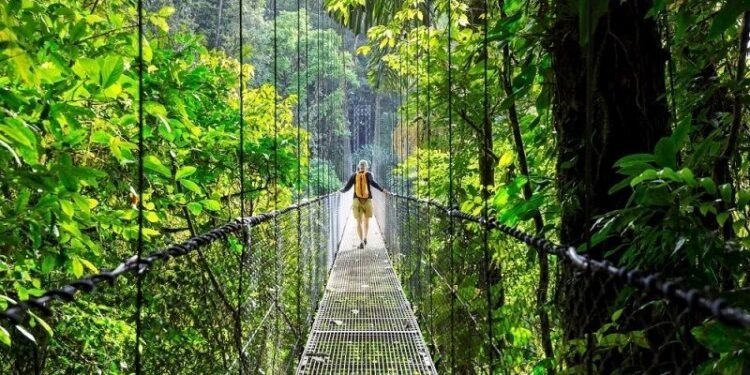 Ecotourism in India which is a recently introduced branch might not be very popular, but those who care about it are doing handful to preserve country’s natural heritage, by taking one baby step at a time. Being mindful of small changes, nurturing the lesser developed areas, and endorsing the traditions and culture of the place are our duties as a tourist. With more travelling comes bigger responsibility! The sooner we realize this, the adequate it is for us and the mother nature.

India, one of the immensely diverse countries in the world, Ecotourism is a thriving industry in the country as it has managed to save its resplendent natural elegance.
The country has diverse natural habitats like biological parks, zoological parks, tea plantations, mountains, and lush green jungles. Being distinguished for its wholesome nature and tribal population, India can be said to be nature’s bounty, and one of the best places to travel in the world.

Let’s begin with delving a little deep into how ecotourism in India is coming up and making its existence popular. TSA has brought you a list of lesser-explored natural heritage destinations in India.

Periyar National Park & Wildlife Sanctuary, located in Thekkady is an excellent example of nature’s reward with extraordinary scenic beauty and prosperous biodiversity. In the wondrous location of Kerala, the Periyar National Park is evaluated as the most secure area for the elephants and the tigers. One of the well-known national parks in South India, set high at the Western Ghat ranges.

Valparai is a hill station situated in the south Indian state of Tamil Nadu. Nallamudi Viewpoint has sceneries of the Anamalai Hills in the Western Ghats and surrounding tea estates.

The endangered Nilgiri Tahr preserved under section I of the Wildlife Protection Act in India can be seen grazing here. While you trek down the Shola jungles and the lush green tea gardens you might notice Wild Elephants and Great Hornbills.

Chandra Tal is a lake located in the Spiti part of the Lahul and Spiti district of Himachal Pradesh. As Eco-tourism is travelling and subsequently keeping nature healthy, you should always travel these spots by foot to keep the water pure.
The lake is set at a height of 4,300 meters and has enormous spiritual significance. The water can be consumed without much sanctification. The weather here can be cold for some as the temperature reaches up to -20 degrees.

Northeast India know to be North Eastern Region, NER officially is the easternmost region of India. It includes eight states – Arunachal Pradesh, Assam, Manipur, Meghalaya, Mizoram, Nagaland, Sikkim, and Tripura.
Rich in tropical rainforests, it harbours unique varieties of wildlife like the Clouded Leopard, One-horned Rhino, Gayal- the wild ox, and the rare ape found in India-the Hoolock Gibbon. The Hornbill Festival in Nagaland is a once in a lifetime adventure, celebrated every year in the initial week of December makes it a ‘must- visit ‘ spot for every eco-traveller’s bucket list.

Kokkarebellur, usually called Kokrebellur is a village located in Maddur taluk of Mandya district of Karnataka, India. The village has received it’s titled after the painted stork, which is called “kokkare” in the Kannada language. This village is a primary example of a balanced relationship between humans and endangered birds- the Spot-Billed Pelican and the Painted Storks. The villagers let these birds live in the trees and roofs of their houses, they believe that the bird droppings are an organic waste for their crops. Every other house in the locality has a wonderful sustainable story to tell.

The Madras Crocodile Bank Trust and Centre for Herpetology (MCBT) is a park for reptiles and a herpetology research station, situated 40 kilometres south of the city of Chennai.
Chennai to Puducherry is a magnificent long road drive, along the stunning coastline of the Bay of Bengal. Every year Olive-Ridley Turtles arrive at the shore of Puducherry and lay eggs. Most of these turtles are captured by fishermen and the eggs are consumed by locals. Sometimes the very presence of tourists and touristic activities can unintentionally cause disturbances to this helpless species. Through Ecotourism, we can try to spread awareness.

Spiti Valley is a cold desert mountain valley situated in the Himalayas. The word “Spiti” signifies “The middle land”, that is the land between Tibet and India
The Valley is home to endangered Griffon Vulture who endured 99.9% population decline due to habitat devastation and lack of food. You might come across the ingenious snow leopard, which is very rare as there are only 400 odd left in India The clear blue water of Spiti river is astonishing and pure, although at some places you will find tracks of human waste destroying the delicate ecosystem.

Bursting with beautiful shimmering beaches, lagoons of turquoise blue waters, and a bit of chronology, Andaman & Nicobar Islands is a tiny slice of paradise located 1,400 km away from the east coast of India. The union territory encompasses a total of 572 islands, only 37 of which are owned and a few are open to tourists.
The beaches here have intriguing marine life, and coral gardens are just one of the explanations to visit the beautiful Andaman and Nicobar Islands. Gandhi Park, Sippighat Farm, and the century-old Cellular Jail which now is a pilgrimage destination contributes to the glimpse of the rich heritage of the amicable islands with a magical and multicultural past.

The Bisle rainforest is located in Karnataka state. It is one of the ‘must visit’ attractions known for the Bisle Reserve Forest of Sakleshpur. It. is a home for various snakes, frogs, birds, and mammals. The forest here is dense with fog, cold breeze, and rains add more to the beauty. Leeches are one of the least creepy creatures. There are a variety of Wild animals like Elephants, Leopards and the most dangerous of all is the sloth bear.

1. Ecotourism: A Sustainable Balance Between Tourism And Ecological Conservation

Check out our Lifestyle section to read more stories on Lifestyle & Latest Trends.

"Be the change you want to see in the world"; Young girls thriving global targets