Eminem: Journey from a tough childhood to becoming Rap God

by Mantasha Naseem
in Buzz
0 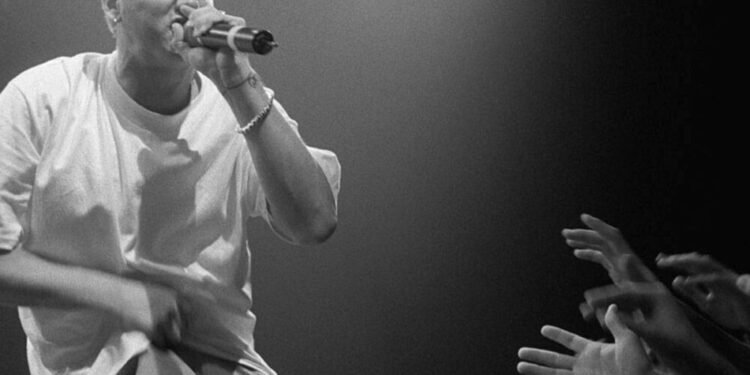 “The truth is you don’t know what is going to happen tomorrow. Life is a crazy ride, and nothing is guaranteed.” – Eminem

Will the Kamikaze singer, sing one more time because we want to wish him a very Happy Birthday. Yes, it’s the Rap God Eminem’s birthday.

The rap artist, producer, record executive, songwriter, and actor who goes by the name Eminem is formally known as Marshal Bruce Mathers III. He was born on 17 October 1972, in St. Joseph, Missouri. His parents were separated when he was just a kid; they had a band called Daddy Warbucks. The rapper, had a tough childhood as his father left them, he would write letters to his dad, getting no replies. He was bullied in school and suffered many injuries from the targeted attacks.

He started his career very early at the age of 14 and went on to win 15 Grammys and nine number-one albums on Billboard 2000. Not only that Eminem has also won an Oscar in the year 2002 for Best Original Song for Lose Yourself. His last album Kamikaze sold over 434,000 units. In the year 2019, he worked with several artists including Ed Sheeran, 50 Cent and Logic. The song starred in 2002 American drama film, 8 Mile, makes him the first rapper to do so.
Eminem has given several magical songs, some made it to the hit list, and earned the headlines for political reasons; he wasn’t afraid to articulate his thoughts out in the world. Remember when he dissed Donald Trump at the BET Hip-Hop awards with his song Freestyle back in 2017.

It is his bold sick music that we are turning to and trying our best to celebrate Eminem’s birthday. From Lose Yourself to Love the way you Lie, or Mockingbird it all hits you differently.

Here is how you should celebrate the rapper’s birthday :

Host a Rap challenge with your fam, watch 8 miles, a movie that describes Eminem’s rapping skill put on some Eminem classics The Slim Shady LP, The Marshall Mathers LP, and Relapse.

Here is why we love Eminem.
After having a difficult childhood, Eminem still became an icon which he is today; he introduced hip hop genre with own twist, he is a passionate musician working, making sense in his writing, presenting with some fantastic masterpieces.

Look, if you had one shot, or one opportunity
To seize everything you ever wanted, in one moment
Would you capture it, or just let it slip?

I’m somewhat outlandish they say
You say we’re cut from the same cloth
But I guess you fabricate, eh?

Dear Slim, I wrote you but still ain’t callin’
I left my cell, my pager, and my home phone at the bottom

Here is TSA wishing Eminem, a fantastic birthday. Thank you for all the valuable masterpieces which we are going to cherish for ages :’)