by Ummarah Khan
in Buzz, News
1 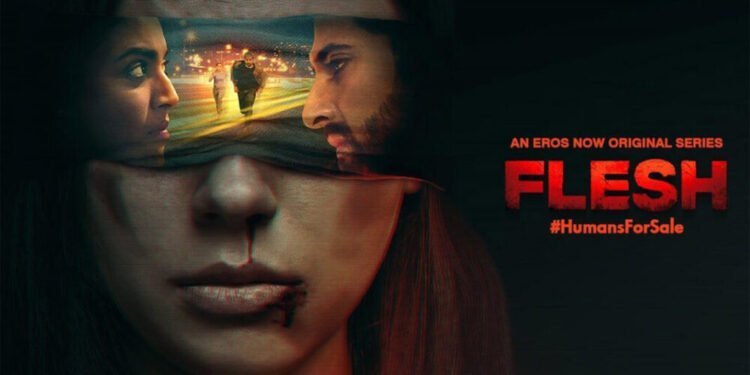 Human trafficking is a subject on which various movies have been made in the past, be it in the Hindi film industry or any other film industry. But Break Ke Baad director, Danish Aslam’s web series Flesh is the first web series to lay their hands on the ugly subject in the OTT world. Flesh is a mini crime thriller web series of barely 8 episodes which throws light on the ugly world of human trafficking. Sidharth Anand and Sagar Pandya have written the story well and co-writer of Andhadhun, Pooja Ladha Surti has made a very good attempt in writing the screenplay. She has presented the old plot in a new way. Each episode has a cliffhanger to make sure you end up watching the next episode.

Flesh is a raw take on the brutalities faced by children and women under the crime of human trafficking. The web series shows unrefined violence and law constraints. The action of the web series includes the abduction of 16-year-old NRI, Zoya, played by Mahima Makwana. The case comes to the rowdy Radha who is frequent in using her heart in the cases which often gets her into trouble.

How Radha solves the mystery of Zoya’s abduction and tackles the heinous crime of human trafficking is what Flesh is all about.

While the subject isn’t fresh, the performers make sure that you are always on the edge of your seat in anticipation to know what’s going to happen next. With the brilliant acting by the lead roles ACP Radha Nautiyal played by Swara Bhaskar, Akshay Oberoi as Taj, along with the supporting cast, Siddhant Behl, Mahima Makwana, Yudhishtir Urs, Kavin Dave and others are all bang on. The engaging chase of cat and mouse between Akshay and Swara is enough to grab the viewers attention. They both share quite the significant screen time but whatever other scenes are given to the supporting cast, they had made sure that they use it well. The character of Radha reminds us of SP Shivani Shivaji Roy of Mardaani. We had loved Rani Mukherjee in Mardaani and Mardaani 2 in the role of cop killing the crime and we equally loved Swara in Flesh. She yet again proved that she is a versatile performer. Akshay as the psychotic and sickening villain is someone we would love to see again. He brilliantly showcased his role as a drug addict bisexual. Akshay, without a doubt, gave a top-notch performance opposite Swara.

This eye-opener web series is filled with action, drama, sex, drugs, violence but moreover reality. Normally the movies face the scissor of censor board on such content, because of which many times the true raw reality face the consequences. But with the current popularity of OTT platform, directors are using the opportunity well to showcase their content without any censor board edit. The same benefits lie with Flesh. It has showcased the grim reality without any filter and that has made the viewers ponder on the bleak world and its happenings. The dialogues of the web series sound very authentic with the colloquial language. The action scenes seem realistic. The tragic raw scenes are balanced to quite a certain extent with small moments of the light portrayal of different relations like the light flirting of Radha and Naman or the sibling love of Rajji and Rajat. Danish has used the first two episodes to set the background and from the third episode, the web series catches momentum.

Despite the several previous films on the horrors of human trafficking, Flesh stands out as it has managed to capture everything just right. We at TSA thinks it’s definitely binge-worthy. The web series is streaming on Eros Now, do watch it and let us know your views in the comments section below.