Sridevi was one of Bollywood's most badass actresses. She ruled not only the silver screen but also the hearts of her fans. Watching these films and recalling a few memories of her is the perfect way to pay tribute to her life. 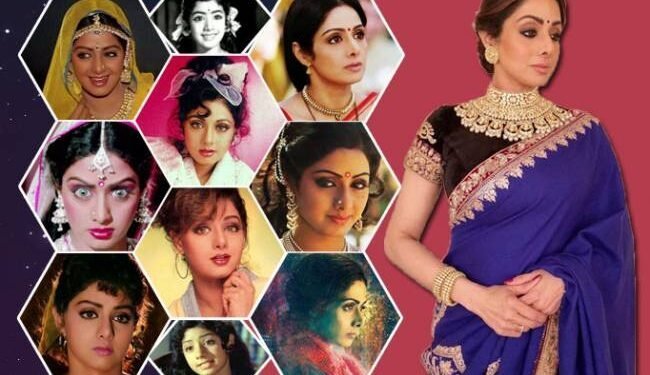 After seeing hundreds of films, I’ve concluded that no one can ever predict which movie will become a cult classic. Unless the film has Sridevi.

Sridevi’s acting prowess never failed to enthrall fans and critics alike. The actress, who made a comeback in the 2012 film English Vinglish, was also praised for her work in Mom. Sridevi was one of the first female performers to be labeled as a superstar. And, based on her body of work, she deserved it completely. Sridevi began her film career in 1969 with Thunaivan and went on to become the most sought-after actress in the industry, and she is still one of the few actors who have attained popularity in both Bollywood and regional cinema.

Consider this: the woman, who began her acting career at the age of four, has the most number of cult classics in the history of Indian cinema. Since today is the late actress’s birthday, let’s take a trip down memory lane and look at five of her most memorable performances.

On the occasion of Sridevi’s birthday on August 13, here are some lesser-known facts about the Bollywood actress

Sridevi was, at the time, the highest-paid actress in the world. However, few people are aware that she spells her name Sreedevi and that she turned down Steven Spielberg’s offer to work on Jurassic Park (1993). On the occasion of her birthday, we’ve compiled a list of interesting facts and our favorite movies of the actor.

Our favorite films of Sridevi

After acting alongside Kamal Haasan in Mahendra’s Moondram Pirai, Sridevi worked with Mahendra again for the movie’s Hindi adaptation. It presented the narrative of Nehalata Malhotra, who develops the mental age of a kid after sustaining a brain injury in a vehicle accident that results in retrograde amnesia.

She winds up in a brothel, where she is rescued by Somu (Kamal Haasan), a schoolteacher who falls in love with her. Sadma won three nominations for Best Actor, Best Actress, and Best Story at the 31st Filmfare Awards.

Bollywood, we now say, has never nailed the fantasy genre. That’s because this Sridevi-led film did it long before we were born.

Nagina was not only a great box-office triumph, being the second-highest-grossing Indian film of 1986, but it was also hailed as a historic landmark in Indian cinema since, despite being a woman-centric film, it was a commercial and critical success and was considered to be Sridevi’s finest performance.

Science fiction is another genre in which Hindi cinema has failed to capitalize. And they should take notes from Sridevi and Anil Kapoor’s film, which is the perfect blend of everything that makes Bollywood work, and top it all off, the weird elements that are associated with science fiction.

Furthermore, if you aren’t singing “bijli giraane main hoon aayi, kehte hain mujhko, hawa hawai” at the end of the film, were you even paying attention.

It’s not easy to compete with Rajnikanth and Sunny Deol, two of the most popular actors of the 1980s, but Sridevi made it look easy. Chaalbaaz was the fifth-highest-grossing film of 1989, thanks to her dual roles as Anju and Manju, which caused viewers and critics to burst out laughing.

Apart from Sridevi’s high-octane performance, the film received so much praise for its story and music that it became a cult classic in Hindi cinema.

Before her demise on February 24, 2018, Sridevi made her 300th and final major film appearance. It told the narrative of a woman who becomes a vigilante to avenge her step-daughter, who was raped by some of her classmates.

Also Read: One Direction Songs That I Still Find Myself Listening To