Haseen Dillruba – An Attempt To Explore All Shades Of Grey

Haseen Dillruba: Director Vinil Mathew and writer Kanika Dhillon have attempted at blurring the lines between realism and a yellow paged tattered pulp fiction novel that one would fancy reading at a train station.

by Mahvish
in Movies, Featured, Reviews
2 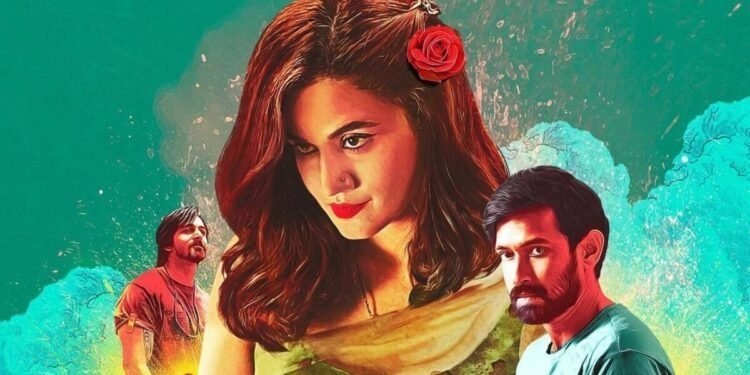 We have all seen enough of linear characters with a rather confusing arc of progression. And it’s time now that we enter the world of grey. Not only should there be characters with more layers but also stories set in that universe of complexities. Who doesn’t love a movie that leaves you pondering as to who was right and who wasn’t rather than just handing out the verdict in a very preachy manner?

Not all films are supposed to teach, neither are most of them supposed to align with our moral compasses. And this deviation and distinction are what draw the line between reel and real. Reel/Fiction is all that realism is not. It can be a far-fetched thought or a reflection of society, but it is just that.

Touching these topics and taking a baby step into the world of grey characters in Netflix’s new release Haseen Dillruba starring Taapsee Pannu, Vikrant Massey, and Harshvardhan Rane in the lead roles. It is a romantic thriller with a pertinent murder mystery written by Kanika Dhillon. The film is directed by Vinil Mathew and produced by Aanand L. Rai, Himanshu Sharma, Bhushan Kumar, and Krishan Kumar. Amit Trivedi directs the music.

The movie is set in the small town of Jwalapur, having a very rural and rustic vibe. The investigation of the murder case of Rishab Saxena (Vikrant Massey), whose prime suspect is his wife Rani Kashyap (Taapsee Pannu), established as an infidel woman having an extra-marital affair with Neel (Harshvardhan Rane), forms the main plotline of the movie.

The story progresses as the investigation continues and the climate of the film keeps shifting from a romantic comedy to a crime thriller with the change of its timelines. Another towering omnipresence is that of a Hindi crime novelist Dinesh Pandit.

The first half sees an establishment of the story and the relationship between the couple. The second half, however, is filled with character arc projecting all over the graph. The characters are given well enough space to explore all shades of grey. The impressive performances by the three main leads don’t let you lose interest. Filled with love, lust, revenge, bloodshed, and a whole lot of drama, this movie is pure pulp fiction, as one would guess a certain Dinesh Pandit would write about.

The movie is one small step towards breaking the shackles of linear black and white characters; it still is not wholly successful.  But brownie points for the attempt.

You can decide for yourself now; the movie is already streaming on Netflix India.