Famous Hollywood Movie Dialogue Which You Use In Your Daily Conversations

Conversations are incomplete without these hollywood dialogues. 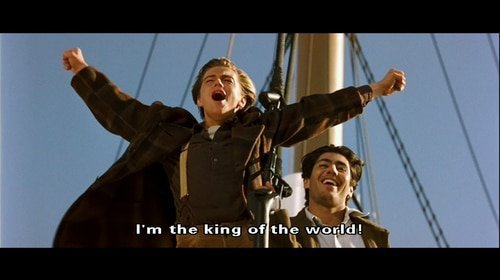 When Dorothy, played by Judy Garland, returns from her trip to Oz in 1939’s legendary “The Wizard of Oz,” she says this nostalgic favorite.

Despite seeing the most beautiful places on the planet, nothing compares to rediscovering the basic joys of her room, her family, and her humble Kansas farm.

The statement has since become a popular proclamation for any traveler seeking the comforts of home.

Few people have ever said farewell with more authority than Arnold Schwarzenegger in “Terminator 2: Judgment Day,” and fans have been imitating the statement ever since.

After delivering the now-benevolent Terminator a quick instruction in Spanish, the cyborg hero recalls the lesson when it’s time to say goodbye to the wicked T-1000, whom Schwarzenegger’s character subsequently destroys with a shotgun blast.

After winning a ticket for the ship’s tragic first voyage, the lucky-yet-unlucky wanderer Jack, played by Leonardo DiCaprio in 1997’s “Titanic,” uttered this legendary phrase on history’s most iconic ship.

When something goes exceptionally well, the statement works for dramatic effect; more frequently, it’s a campy way for someone to express themselves if they find upon the bow deck of a boat.

In the 1984 film “The Terminator,” Arnold Schwarzenegger’s hunter-killer cyborg makes this statement after analyzing the building’s structural stability and exiting the chamber.

This is something you would hear—probably in Arnold’s Austrian accent—from someone trying to convince someone else that a conflict isn’t over yet, but is simply taking a break.

Cuba Gooding Jr.’s cash-obsessed football star character Rod Tidwell shouts this famous remark at the eponymous character, who is his agent, in another “Jerry Maguire” line.

It’s now used to advise someone they’re speaking with to “cut to the chase” or “get to the point.”

In the 1959 film “Some Like it Hot,” starring Marilyn Monroe, the character represented by Joe E. Brown says this basic truth.

You can use the line to relieve oneself of the blame for a mistake at any moment.

Marlon Brando‘s titular character tells his Hollywood star godson Johnny Fontane in the 1972 mafia classic “The Godfather” that he would be able to persuade a reluctant studio head to grant Fontane a part in a film that Fontane badly desires.

The post implies extortion—that the studio boss would surrender or pay a high price—which he does, in the form of waking up with a horse’s head on his pillow.

The statement is becoming popular among CEOs and other wealthy people who refuse to be rejected during a negotiation.

Also Read: Why ‘Dark’ Is A Must-Watch For All The Sci-Fi Fanatics!