‘How I Became A Superhero’ A Netflix Movie Review

In How I Became a Superhero (Netflix), everyone has abilities, and enhanced people are a part of regular Parisian life. That isn't inherently a problem unless organised criminals figure out how to extract such abilities and manufacture them as a narcotic, at the expense of the enhanced people's actual well-being. One odd detective has a personal obligation to discover what's going on. Read on to know more about it our detailed review.

by Buzz Desk
in Reviews, Movies
1 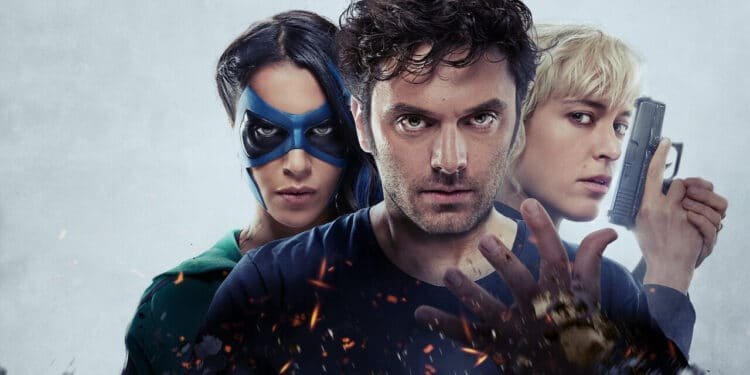 In a version of modern-day Paris, enhanced people have become so regular that a super-strong “Tonic Girl” advertises salad kits on TV and a YouTuber runs poll ranking superheroes from worst to greatest. While some enhanced people use their abilities to generate publicity, others wear masks and fight crime. The liaison officer for the super-powered community is police detective Moreau (Pio Marmai). For years, Moreau worked closely with Pack Royal, which included the electric power Gigaman (Clovis Cornillac), Callista (Leila Bekhti), who has psychic powers, and charismatic teleporter Monte Carlo (Benoit Poelvoorde).

However, Gigaman was assassinated, Callista gave up tackling crime in favor of running a halfway house, and Monte Carlo was forced to retire due to the onset of Parkinson’s Disease. And one of the more intriguing parts of the universe How I Became a Superhero builds is how psychiatric problems influence people’s superpowers.

When a series of fires erupted across Paris, Moreau discovers that superpowers are being sold as street drugs. Inhale deeply and shoot flames from your palms after breaking the light stick. It’s that simple unless an overdose of superpowers kills your ordinary mortal self.

The swarthy Naja (Swann Arlaud), who invented the procedure for surgically extracting superpowers, is unconcerned about the rising slaughter. While his minions kidnap more enhanced people to put under the knife, Naja becomes increasingly deranged due to his product.

And as Moreau and his reluctant new partner Schaltzmann (Vimala Pons) connect the dots between Naja, a disgraced psychologist who specializes in superhero-related illnesses, and the rising street violence, Monte Carlo and Callista must once again suit up to assist the detectives in thwarting the criminals while restoring the good name of enhanced people everywhere. As it turns out, they’ll have some support in this endeavor, as certain people’s enhancements are less well-known than others.

Watchmen was a graphic novel, film, and HBO limited series exploring what happens when superheroes take on larger roles. Similarly, even The Boys on Amazon Prime has a similar premise to How I Became a Superhero. It depicts an alternate reality in which augmented people are part of everyday life.

Monte Carlo, played by Belgian actor and comedian Benoit Poelvoorde, channels a pleasantly tipsy David Niven as he lips synchs around his apartment in a dressing gown, recalling his past glories as a crime-fighting member of Pack Royal, and generally refusing to admit that the Parkinson’s Disease slowly killing him is even a thing to be concerned about.

His “I meant to do that” expression as he rises out of a pile of debris as he overshoots a teleport in an attempt to strangle a bad guy is loaded with adorably goofy arrogance.

Our take on the movie:

How I Became a Superhero has a lot in common with an episodic series like The Boys, including the same premise of superheroes living among us and their heightened skills dominating popular culture.

While it claims to be a stand-alone picture, the pacing and structure make it feel more like the pilot for a quality television show.

The movie establishes its pieces on the board and expands them to include fading superheroes with more character actor charm than enhanced abilities.

How I Became a Superhero has all the makings of a nine- or ten-episode Netflix series in terms of style, feel, and casting.

Pivo Marmai’s Moreau is a lovely blank in the middle, but he comes to life anytime his unconventional investigation tactics are used, and he and Vimala Pons play Schaltzmann and Moreau’s oil and water personalities wonderfully rub off of each other.

As it stands, the “How I Became” section of the film’s title is what it’s all about – there’s been so much set-up and preparation that we’re left waiting for the rest of the content to come out.

We would say, STREAM IT, but only if you’re already a sucker for superpowers. Because the dramatic parts of How I Became A Superhero fail significantly if it isn’t talking about superheroes and their impact on everyday life.