This will be Hrithik Roshan and Saif Ali Khan's first film together after "Na Tum Jaano Na Hum," which was released in 2002. Read on to know the details.

by Buzz Desk
in Buzz
2 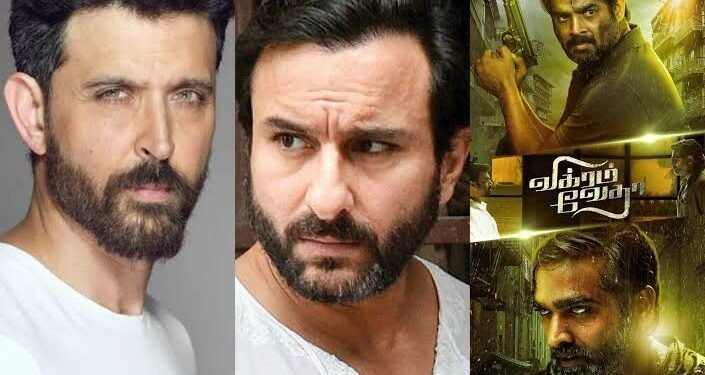 The 2017 Tamil criminal thriller ‘Vikram Vedha,’ directed by Pushkar and Gayatri, starring Madhavan and Vijay Sethupathi in significant roles, is now being made in Bollywood. The major parts in the Hindi adaptation of Tamil hit Vikram Vedha will be played by Bollywood actors Hrithik Roshan and Saif Ali Khan.

The film will be released in September, according to the makers. The primary characters in the original neo-noir criminal thriller, which was released in 2017, were R Madhavan and Vijay Sethupathi. Sashikanth of YNot Studios produced the film.

Filmmaker Neeraj Pandey’s Friday Filmworks is remaking the film in Hindi in collaboration with Reliance Entertainment and YNot Studios. The Hindi version starring Hrithik Roshan and Saif Ali Khan is in advanced pre-production and is expected to begin shooting next month. A source connected to the project told PTI, “We are hoping to release it on September 30, 2022.”

The writer-director team is also attached to the Hindi adaptation. Aside from this film, Hrithik will start filming his next action picture, Fighter, soon. Siddharth Anand will helm the patriotic action drama, which also stars Deepika Padukone.

On the 15th anniversary of his hit superhero flick Krrish, the actor vowed that the popular franchise would be revived with the fourth installment.

In the Prabhas-starrer Adipurush, he will reunite with Tanhaji: The Unsung Warrior director Om Raut to play Lankesh.

Also Read: 7 Films and Shows that will be streaming on Amazon Prime this July!