Hum Do Hamare Do Review: A Movie Held Up By Its Impressive Performances!

Rajkummar Rao and Kriti Sanon's family dramedy is now streaming on Disney+ Hotstar. Here is a brief review about the movie, free of spoilers, to let you know if it is worth watching or not.

by Anamta Husain
in Reviews, Movies
1 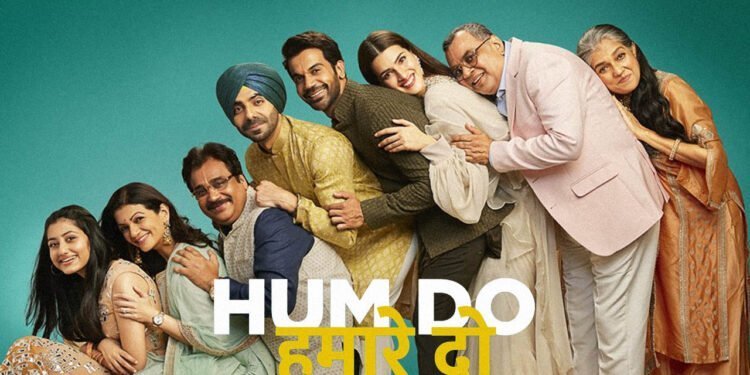 There is a side of Bollywood that never fails to amaze us– family comedy. Whether it is Badhaai Ho, Luka Chuppi, Hindi Medium, or Shubh Mangal Savdhaan, each movie gave us something to learn and moments to laugh at.

Hum Do Hamare Do is a similar attempt to a family dramedy to make it both a heart-warming and humorous watch. Dhruv Shikar (Rajkummar Rao) is an orphan who, against all odds, became a successful businessman several years later. A chance meeting with Anya Mehra (Kriti Sanon) had him falling for the freelance blogger.

The two have a relation close to ‘love at first sight’, and without any big promises and emotional scenes, the two decide to get married.

The character development for Sanon, for her role as a freelance blogger in the modern world, was not exactly accurate, and at certain points, she was too naïve to have a profession that the movie shows. Nonetheless, Kriti tried her best to fit in her character and presented an amazing performance for the audience.

Continuing the story, Anya, whose parents died in a theatre fire several years ago, wants to marry someone with a ‘sweet family and an adopted dog.’

For the orphan, arranging an adopted dog is easier than finding parents. Nevertheless, Dhruv seeks Purshottam (Paresh Rawal), who owned a Dhaba where he used to work as a child and tries to persuade him to play the role of his fake father.

When Purshottam denies it, Dhruv plans to find his lost lover to complete a perfect family for Anya. A unique perspective of the movie is the way it tries to blend two incomplete love stories to form that ‘sweet family.’ Away from the bonds of love and family, it still continues to demonstrate traditional ideas in a contemporary manner.

In the movie, the film’s concept was not about a family of two with two children, as people might think because of its title, which is commonly used for the same context, rather the film endeavors to bring two couples with two old couples and form a beautiful family.

Both Dhruv and Anya were deprived of a parent’s love, and Purshottam was robbed of not only children but his first and only love as well. The concept of the film was no doubt amazing.

Hum Do Humare Do had wonderful direction. The plot was paced impeccably and not once will you feel that the movie is becoming dull or losing its momentum.

However, at some point, the plot became rather unconvincing. The sentiments and emotions relevant to the scenes were carried to a higher level because of the dialogues and of course, the way the lead characters presented them.

The comedy of the film stands out from its storyline. With Paresh Rawal, humor comes naturally. On top of that, if you have watched Rajkummar Rao in comedy movies, you know the potential this actor carries to make you laugh.

Bareilly ki Barfi, Mimi, and Luka Chuppi are testimonies to Kriti Sanon’s sheer talent when it comes to acting in dramedies.

Furthermore, the three of them gave their best when it came to emotional scenes. Paresh Rawal yet again proved that he has the potential to not only give us scenes that make us laugh until it hurts, but is also equally talented when it comes to emotions and love.

The storyline did not present itself as extremely strong and could have been a little better, but the three carried the movie on their shoulders and successfully presented a movie that could be watched to lighten up one’s mood and leave them with a lot to learn from this reimagined version of family connection.