Missing Money Heist already? Don't have anything else to watch? Here is a fun playlist for every money heist character relating it to their life. After all, our Hindi Cinema has provided us with songs for every situation and personality. 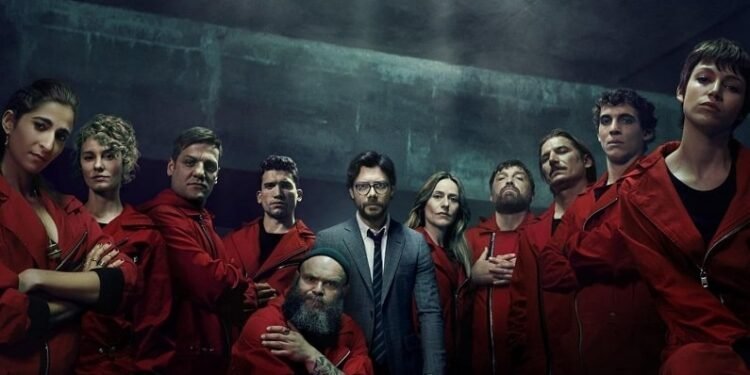 Money Heist gave us a beautiful ending no doubt but with a sorrowful goodbye.

Four years before, we were introduced to some characters that would soon become one of our favorites– whether it was Professor with his genius mind, Lisbon with her badass attitude, Alicia amplifying that temperament, Denver with his strange laugh, Monica with her Stockholm Syndrome, Nairobi with her vulturous eyes and Tokyo with her anger issues– La Casa De Papel or Money Heist soon become a global phenomenon.

Professor and Lisbon had the best relationship– from enemies to lovers. Kalank’s title track accurately portrays their relationship as he was a thief and she was well, a police officer.

2. Denver and His Laugh

Remember Denver’s funny and adorable laugh? This song by B. Praak is centered around someone with an incredible laugh. Who fits the description? None other than Denver!

Who is the real Badshah of Money Heist? Yeah, we know that The Professor is incomparable. But Berlin was the real mastermind. He had a vision, a soul of a child, and a heart of a lover. Even if initially he appeared to be an egoistic and self-centered human, we soon realized how dedicated he was to his principles. Truly, he was the real king.

Nairobi and Helsinki *sobs already* had one of the most beautiful bonds in the series. The fun times they had together and the way they supported each other– just re-imagining that the last scene of Nairobi breaks us down.

She was strong, fearless, and resilient. With eyes that reached every nook and cranny to keep things running smoothly, she was the mirror image of Bogota–no wonder the two fell in love.

Every one of us must have at least once wished to have a lover like Palermo.

The way he looked at Berlin and the light in his eyes when the two danced together sharing intimate moments– Ae Dil Hai Mushkil is a perfect ode to his underrated love story.

What commenced the second heist? That one phone call from Rio because he was unable to survive without Tokyo.

He never looked at another person for a second because practically his entire world revolved around Tokyo.

Is it possible for a real human to be that annoying? Probably the most hated antagonist in the history of antagonists, everyone was waiting for him to die in the last season.

“Yeah I’m coming back to the race

Tell me if you ready!

Can you take the pace?

This time wanna make you see

If life was a game, The Professor would have won without any strong opponent. Simple is the real illusion– and Sergio did not leave a single opportunity to surprise us.

Not gonna lie, Alicia was a badass. It is not a simple task to be nine months pregnant, have a whole force searching you and trying to find The Professor.

What not even the entire Madrid could do in weeks, she did all of it alone in a couple of hours.