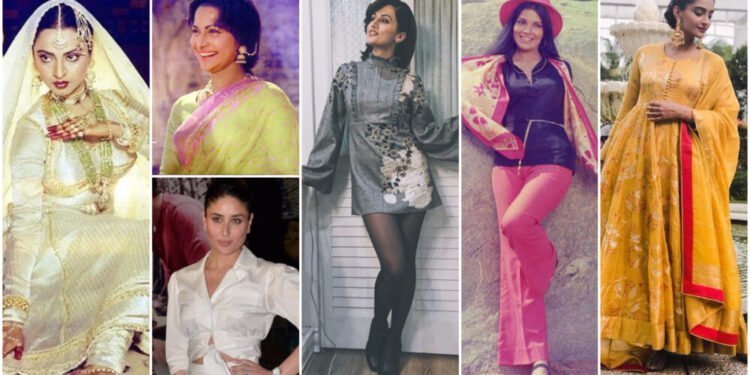 1
SHARES
5
VIEWS
Share on FacebookShare on TwitterShare on WhatsApp

India is the second-largest textile and garment exporter in the World. Our textile industry is expected to have a net worth of $141 Billion by 2021. This can easily be observed by the amount, variety, and quality of Women’s clothes available in our markets. Like all major fields, Indian fashion and clothing too, have seen a lot of highs and lows and the fashion we see today is totally transformed than what we started with.

It is said history repeats itself and it is no different for fashion! Indian fashion is as ancient as the human civilization with a mix of regional, cultural, and historical influences. Vintage trends like bell bottoms, frills and trousers are once again making a comeback. It is thus evident that the fashion trends in India or anywhere else in the world always repeats itself in a decade or two bringing neoteric twists to the current fashion.

By the Aryan period, women wore one single long piece of simple unstitched cloth called a sari, that ranged around four to nine meters in length. Saris are first mentioned in the Vedas time period, which is about 600 BC. Generally, wealthy women wore saris made of exquisite materials like silk, but most women wore simple cotton ones. Not only the material of the cloth but also the way the wore it differed based on regions, religion, social status, etc.

By the 2nd century AD, the muslin clothes produced in the southern part of India were merchandised to the Roman Emperors. The evolution of stitched and tailored garments in India is traced even before the beginning of the 10th Century AD which was further proposed around the 15th century by the Muslim empires of India.

There were many different ways and styles to wear a sari at that time. To dress up, women wore them like skirts with a top part thrown over their shoulder or worn over their heads as a veil. Working women often used to wear pulled up the sari, cautiously pulled between their legs to make something like a sort of pants, which is still worn by women in Maharashtra. Women who were fighting with the armies in the pre- British period tucked in the top part of their sari in the back for comfort and, to free up their arms for fighting. Younger women generally wore different types of brightly colored saris, while widows and other women who were in mourning wore strictly, only white ones.

Sari, the versatile women’s clothing has been India’s trademark fashion style over the ages. Salwar Kameez and various other traditional ethnic clothes like the lehenga, sherwani, lugda, lungi, etc. and khadi clothes like the Nehru Jacket, etc. started out as our wardrobe staples. However, with the influx of the western world and British rule, Indians were exposed to western forms of clothing like skirts, dresses, gowns, blazers, tuxedos, trousers, and pants. As a result, the mix of these fashion elements resulted in a very unique style that is now the fashion image India projects to the World.

International trends and the British era also played a role in defining the way Indians dressed over the years. The 60s were ruled by heavy chunky ornaments, embroidered saris whereas the 70s saw a lot of bright colors, polka dots, bell-bottoms, and oversized sunglasses. India also went through a lot in terms of defining women’s rights, their own choices, and thus the shift from very understated shy traditional looks to modern bold choices.

The salwar was replaced by jeans, the kameez was replaced by tops and t-shirts. Instead of the traditional chikankari, benarasi, and other handcrafted fabrics, people started adapting more to types of denim and other westernized materials. Khadi, linen, and cotton which are materials more suited to our climate, were replaced by different types of exquisite materials like chiffon, satin which were in vogue.

The modern period in fashion is largely influenced by Bollywood. With the advent of the Internet, TV, and other forms of media, Indian fashion was globalized and one-piece dresses, sportswear, halter tops, skirts, and floral gowns started becoming a common choice of clothing by the 90s. Shirts and trousers or T-shirt and Jeans were by this time already staple wear for Indian men. By 2000, the dawn of the modern era, a lot of regressive Indian practices were already shed, women secured their position to large extents, and became more independent and free-thinking.

Participating in the latest trends and styles, they also started going for bolder and more comfortable clothing like shorts, capris, jackets, shirts, and pants rather than opting for traditional ethnic clothes. We also witnessed the development of a uniquely Indian style, the Indo Western Fusion dresses, which combined the beauty and feminine salwar kameez with the comfort and practicality of the denim jeans. This combination has since then, ruled the hearts of college-going, working, old, young, almost every woman in India.

Here is a timeline of the most recent fashion trends in India, all by Bollywood. (Following Picture Credits: Style Cracker)

The trends as we know them today, in Indian fashion are a fusion of all the fashion trends in Indian history. British(western), Ancient fashion, which in itself includes a wide range of regional variations and the modern trends influenced largely by the west; is what we know as Indian clothing today. And this is what makes it the most different and sought industry with international interest in it. Also, not only Indian fashion is influenced by the west, with time Indian apparel too has been donned by the west and is now quite popular there.

The market for the fashion industry in India, especially for women, is quite lucrative in terms of scope and variety. Today, while the rapid growth of information technology popularised the corporate look, the revival of the ethnocultural look has become quite dominant leading to the popularisation of the traditional forms of art and crafts. Of late, the International fashion brands have begun to focus on the immense potential of this sector offering heaps of opportunities to the in-house fashion designers. The Indian fashion industry has expanded to such an extent over time that it has now come at par with the international fashion industry and has become one of the most popular revenues generating industries of India.

Parts of “Mulan” filmed in Xinjiang where millions of Muslims are detained- Disney in an unasked battle.