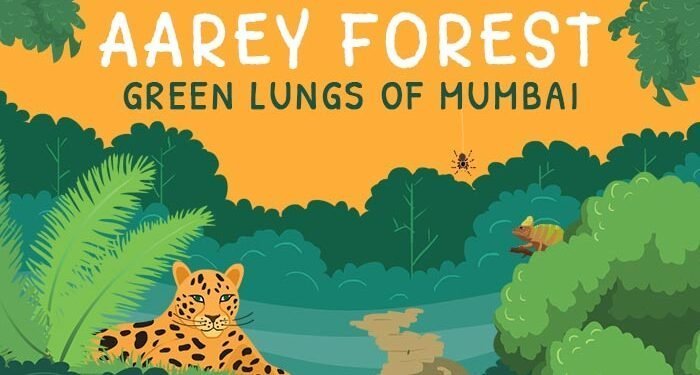 The month of September is a cheerful month for all the environmentalists as the Maharashtra government’s announcement to earmark the 600-acre land of the Aarey Forest as a reserved forest should be considered as a victory towards the tireless efforts for a sustainable future.

The designated forest is located in the Aarey Milk Colony, established in 1949, occupying over 3,166 acres of land. Over the last 70 years, the outskirts of the colony i.e; about 1282 acres have subsumed under various state development projects such as Film City. Now the leftover of only 1800 acres of green space, habitat to 290 wild species of flora and fauna, is the last green space within Mumbai’s Concrete Jungle.

Although out of the 1800–plus acre of green space only 600 acres have been announced to be designated as reserved forest. This is also a result of public outcry that began last year when Mumbai Metro Rail Corporation Limited (MMRCL) decided to construct a car shed for Rs 32,000 crore underground Colaba-Bandra-Seepz Metro corridor and cleared the site of over 2,000 trees.

Environmentalists, activists and citizens joined hands to protest against this development project while having confrontations with the authorities and even 29 people being arrested on charges of allegedly obstructing and assaulting police personnel during the protests.

In this listicle we will tell you about 5 movements started by the common citizens against projects that could have led to a heavy toll on the environment:

It is the earliest known protest and the only one that includes such an enormous loss of life to safeguard the bio-diversity in Indian history. In the year 1730, in Khejarli, the Marwar region of Rajasthan, trees were ordered to be cleared for a new palace to be built for the Maharaja of Jodhpur, Abhay Singh.

Among the villagers, there was a woman named Amrita Devi, who could not bear to witness the destruction of the floral habitation. She took onto herself to stop the deforestation, and hugged the trees, while also encouraging other villagers to do the same and they followed her in the resistance. On account of the historian, 363 Bishnoi villagers martyred in this movement.

The Maharaja, upon learning about these events, rushed to intervene but the carnage was already done. On reaching the village he expressed regret to the community for the action of his soldiers and ordered the soldiers to terminate their operations. After the incident, he also declared the Bishnoi state a protected area.

The Bishnoi movement has been an inspiration for the prominent movement like the Chipko movement and to this day the Bishnoi sect commemorates the sacrifice of Amrita Devi and others in September every year.

The Chipko Movement means ‘stick to’, in this context, when contractors try to chop the trees just stick to them. The prominent activists involved in these movements were Sundarlal Bahuguna, Gaura Devi, Sudesha Devi, Bachni Devi, Chandi Prasad Bhatt, Govind Singh Rawat, Dhoom Singh Negi, Shamsher Singh Bisht, and Ghanasyam Raturi, to protect the trees from being chopped down for commercialization by the forest contractors.

Sundarlal Bahuguna educated the villagers about the importance of trees, telling them how trees help in preventing soil erosion and benefit the environment with rain and purified water.

The Chipko movement garnered publicity in 1978 when a few women had to face police brutalities trying to save the trees by hugging onto them. Hemwati Nandan Bahuguna the then Chief Minister of Uttar Pradesh appointed a committee to inquire in the matter. Subsequently, the committee ruled in favour of the villagers. The method of protest used in the Chipko movement gained such widespread popularity that it went on to become a model for all future environmental movements across the world.

The Silent Valley lies in the tropical area of Kerala which is extremely rich in biodiversity. In 1978, the Kerala State Electricity Board proposed a plan for the construction of a hydroelectric dam across the Kunthipuzha river, but the project would also result in the clearing of at least 8.3 square kilometres of lush green area.

The locals evaluating the immense loss of habitat for both flora and fauna in the area vehemently opposed the project and demanded the project be abandoned.

Poet-activist Sughathakumari and an NGO named Kerala Sastra Sahitya Parishad (KSSP) played a major role in the Save Silent Valley movement. After a year of protests and resistance from the locals, the government relentlessly gave in to the demands of the population eventually quashed the project in 1981. They also declared the Silent Valley as a protected area.

The Jharkhand Jungle Bachao movement began in the 1980s when the exploitation of rich natural resources of the area was at its peak. The forest department and the mafia in collaboration were expediently denuding the forest covers, filling their coffers, while rampant harassment of the native tribes (Adivasi) was typical.

In 1982, a collective movement started in the Singhbhum district of Bihar against the order of the state government which decided to replace the indigenous Sal Forests of the area with a highly-priced teakwood plantation for commercial purposes. The native tribes of the region found this order to have an unsettling impact on their livelihood and thus a Jharkhand Jungle Bachao Andolan (JJBA) began.

This JJBA brought in many drastic changes in the social structure of native tribes and developing a four-tier Community Forest Governance Strategy:

The movement continues to this day, moving forward with the determinations to protect forests and the restoration of forest rights for the indigenous people. JJBA has strengthened the Forest Protection Committees and provided the native people of a common platform for sharing their opinion and experience, for coordination and cooperation.

The foremost objective of the movement was to protest against the building of several large dams across the Narmada river as the people displaced by the construction of the Sardar Sarovar Dam were not provided proper rehabilitation and resettlement. It started with the objective to get reasonable compensation for displacement and rehabilitation to all those who were to be affected with the construction of 30 major, 135 medium, and 3000 small dams, over the Narmada river.

In 1985, when activist Medha Patkar visited the site, she found gross irregularities in the reimbursement for the displaced and environmental impact assessment by the government. Moved by the injustice, she began protesting against the project through non-violent means like hunger strikes and protest march. She was later joined by native tribals (Adivasis), farmers, environmentalists, and human rights activists including prominent personalities like Baba Amte, Arundhati Roy, Aamir Khan, etc.

The project was inaugurated in 2017, by PM Narendra Modi. Although failed in its endeavour, this movement shifted the focus on the importance of effective environmental impact assessment for every future project subsequently questioning the model of unchecked development across the world.

Celebrating Ayushmann Khurrana’s 36th Birthday- Recalling some of the best movies of the Versatile actor!