by Sami Majid
in Buzz, Opinion
0 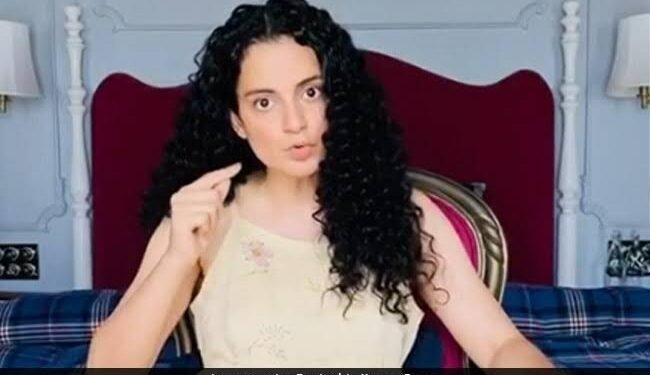 Kangana Ranaut is one of the talented actresses of the Bollywood industry. She is often referred to as ‘Queen‘ since she acted in the Vikas Bahl film ‘Queen’. She has showcased her talent since her early years in the Bollywood Industry and it has only increased in recent years. Her talent is the reason that she is the recipient of several awards, including 3 National Film Awards.

‘Controversy’ is a word we always find attached to her name, be it for her films, relationships, family, or simply her political views. Recently, she has been attached to various controversies stirred by the death of Sushant Singh Rajput. Her involvement in those controversies and the way she turned everything to her interest have proved that she is no ‘Messiah’ to the ones whom she calls victims like herself.

In fact, she is an opportunist who knows her game well. Her fans seem to believe her unfiltered comments as truth when in reality they are nothing but molded false words in the disguise of truth. Watching her actions with great observation, I have come to the fact that our ‘Queen‘ has learned great ways to play the victim card. But she isn’t aware that people are gradually sensing the hypocrisy in her words and actions. And soon her fans will realize it too, I sincerely hope that.

Many, including me, mistook the ‘Queen‘  for being a courageous, fearless, and bold woman who could speak out against wrongs done to any innocent and stand for justice for a person when she spoke against nepotism and the Bollywood insiders on the death of Sushant Singh Rajput. But as the days passed, we witnessed how she was only using Sushant’s death for her personal motives.

This can be said because, for a couple of days after Sushant Singh Rajput’s death by suicide, people were only talking about mental health. And there was also hope that things might change for the better now, but Kangana took over the whole issue and presented her view that a man who was a university topper cannot die by suicide. She turned everything to nepotism which made Sushant suffer. So far so good, no? Well, no!

She not just called the insiders a reason for Sushant’s suffering but she even called them ‘murderers’ calling his suicide a ‘planned murder’ without any proof, due to which her army of fans started severely torturing many Bollywood insiders like Karan Johar and Alia Bhatt. But soon after she dragged everything to her experiences as she has always seen doing. She started telling how people have done the same with her and how it’s all still in action. She has been seen doing the same, various times in the past too, where she grabs an opportunity of someone else’s sufferings and mold it to target the people she has issues with.

A very recent example of this was during the latest phase of the movement #BlackLivesMatter on the death of George Floyd. She was giving an interview to BBC then and there she started calling out her rivals from the Bollywood industry who missed to condemn the lynching of Sadhus back in India but are speaking for George Floyd. To her it was hypocrisy. But if that’s hypocrisy then what will our ‘Queen’ call herself being silent on the lynching of Muslims in India by the groups of Hindu right-wingers? Won’t that be called hypocrisy as well?

Her fans think she favors outsiders and suppressed women and always stand up for them but the truth is she only favors who can be of benefit to her and who speak the same language she speaks. The proof to this is her virtual fight with Tapsee Pannu, Swara Bhaskar, and Richa Chaddha, just because their thoughts didn’t align with her own.

She poses herself as a feminist but that’s not true too, as not much long ago when Padmavat was receiving death threats by the right-wing organizations, a movement called ‘Deepika Bachao’ was going on. At that time the industry was signing a petition started by Shabana Azmi in support of Deepika but Kangana refused to sign it. She refused by saying,

So, is it safe to say that her feminism is occasional and surfaces only when she finds it suitable and convenient for her?

Her mad controversies always start from the unnecessary things she never seems to stop saying. Earlier this year when her movie, Panga was on release, she was asked by a journalist about her take on the Supreme Court lawyer Indira Jaising’s comment that Jyoti Singh’s mother, Asha Devi, should forgive the rapists of her daughter. Kangana’s reply to this was:

Jaising should be kept in prison with the four rapists for four days as that’s what’s required and that women like Jaising are the ones whose wombs (konkh) create sons who are rapists. People who sympathise and feel affection for murderers and rapists are the ones who give birth to rapists.

She played Rani of Jhansi in her film, Manikarnika. She is often seen speaking about the film and role being so prestigious, but it seems that she has learnt no lesson while filming the life of Jhansi. She spoke against the constitutionally guaranteed policy of reservation for SCs, STs, and OBCs. Had Kangana grasped the essence of her role, she would have acted differently in her real life. She forgot that in order to win something you need people by your side. Even Rani of Jhansi had Jhalkari Bai.

Recently, a part of her illegally built office was demolished by BMC, and Mumbai police are set to probe her alleged drug links, all of which are being tainted by her as attempts to shatter her freedom of speech that she happened to use to call Mumbai ‘POK’ (Pakistan Occupied Kashmir). At this time she seems to have crucial support of the BJP government giving her Y-plus security cover, deploying Sambit Patra to her defense, and have Devendra Fadnavis targetting the Shiv Sena government over the demolition issue – but her anti-reservation utterances might create problems for her in terms of the on-ground people being against her.

Even after all the backing, she has been receiving from her blue-eyed political fraternity, she went ahead calling BMC as Babur’s army. I don’t understand what would have been the necessity of pushing such a communal narrative at this point, where the action of BMC has nothing to do with Babur.

More to this story, our ‘Queen‘  declared the “death of democracy” when her office was taken down. Has she not seen this democracy dying so many deaths earlier as well? When the other parts of the population were suffering, she didn’t call it the death of democracy but now since she is at the radar, suddenly the democracy is dead? She spoke for the sadhus but kept mum when Muslim student activists were witch-hunted from their homes just because they spoke against some acts of the government. The democracy wasn’t dead then?

The list of her selective feminism, humanism, and anti-nepotism is never-ending. I can go on and on about it for hours but that would take my share of time from the important aspects of the news, hence, I’ll stop. The exact same thing should be done by all of us. We should not give her hypocrisy the attention which other important aspects of the world deserve. In order to feed the attention she desperately searches all the time, we have missed many important things in the past and this will go on in the future too if we didn’t realize the truth behind her actions and words, and stop before it’s too late.

Also, check our opinion section to read opinions on other matters.

Disclaimer: All the views you’re about to read next are the personal views of the writer and have nothing to do with the views of TSA-The Second Angle as a media house.

J.K. Rowling’s Latest Book Comes Under Glare of Critiques On Her Transphobic Views

Kangana Ranaut's Another Vocal Fight, This Time It's With Jaya Bachchan