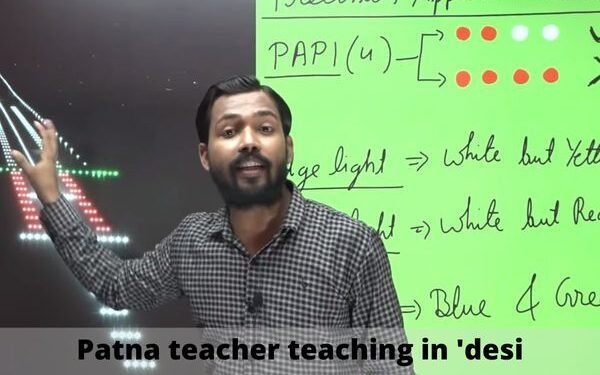 1
SHARES
3
VIEWS
Share on FacebookShare on TwitterShare on WhatsApp

UPSC is one of the toughest of all the competitive examinations and the most respectable jobs in India. We are all aware of the pressure every Civil Service aspirant goes through. There is hardly any teacher who these days possess an exceptionally remarkable skill in teaching and delivering a lecture that straight fits in the mind of a student but, Khan Sir from Patna is one such teacher who is winning hearts in million through his YouTube Channel which has near to about 2 million followers. His videos started trending on Twitter after an IPS Officer shared.

“I would have topped the UPSC if I had a teacher like him” Arun Bothra, IPS Officer’s Tweet read

I would have topped the UPSC If I had a teacher like him 😅 pic.twitter.com/IaCKtDe2kf

The video Arun shared of Khan Sir teaching about the “Precision Approach Path Indicator” also known as “PAPI” became a huge hit amongst the netizens in no time with millions of retweets and shares. Khan Sir is seen explaining in detail about PAPI which is used by Airplanes while landing on the runway in the night time. The video he displayed on his YouTube channel while teaching was of the ill-fated Vande Bharat Mission flight crash that happened some weeks back at Kozhikode which flew from Dubai.

Detailing further about the video to his viewers, he spoke in his Desi typical language which we call a “Colloquial Hindi Style” which undoubtedly was a lot more engaging. He kept is simple and used words like “do tho”, “pilotva” that added a comic element to his teaching in a more hilarious way.

Khan has a YouTube channel with the name “Khan GS Research Centre” and a Coaching Centre in Patna of the same name. Not only does he teach his students with the utmost interests but make them understand everything technical with so much fun and ease.

Claustrophobia: An explainer on the phobia, it’s symptoms and treatment

Claustrophobia: An explainer on the phobia, it's symptoms and treatment