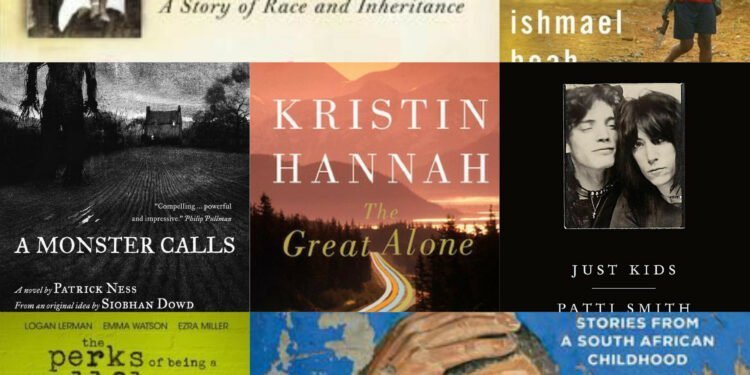 Books can be a great way to make effective use of time, especially in this pandemic when bad news is engulfing all of us, some time alone with a good book in hand and something to bite can really prove to be helpful.
Today, I bring you some books that I read and enjoyed and thought you all may like them as well. This lockdown is a great time to read them all if you haven’t. So, read my list and let me know in the comments section at the end of the post that which are the ones you’ve already read and also the ones you’ll be trying soon.

• Born a Crime by Trevor Noah:

This one is a memoir on Trevor Noah’s childhood and upcoming in South Africa as a biracial boy during times when being biracial was technically illegal. The book is written a lot like a really long personal essay, so for those interested in getting a feel for that style of writing, I highly recommend checking it out. It isn’t too difficult to read and at the same time, it is really funny and motivational.

•Dreams from My Father by Barack Obama:

It’s been a few years since I last read this, so my memory is, unfortunately, a little fuzzy on this one, but I recommend it a lot, especially if you are interested in former US President Obama. It looks at Obama from his childhood in Hawaii up until his entry into Harvard Law in 1988. Overall a highly engaging and rewarding read. The last passage of his trip to Kenya is easily the best. In the end, the book is really what the title is, Obama and his understanding of his father’s life and why he took the decisions he did go right into the heart of racial relations in US and Africa.

Buy- Dreams from my father.

This one details Ishmael Beah’s work as a child soldier during the civil war in Sierra Leone. It’s extremely captivating, and I highly recommend it to those interested in political science, war history, international affairs, and civil conflicts. Ishmael Beah tells the story of how he went from an innocent boy to his true story of how he became a boy soldier in Sierra Leone.

Just Kids”, what an incredibly written memoir, so touching and meticulously articulated that Patti takes us to the life of a young helpless teen girl, vulnerable to the vagaries of life and her serendipitous acquaintance with a young man at a very testing time of her life and later befriending him for a lifetime.
It is extremely well written which is almost written like an essay. To those interested in more personal essay writing, I think this would be a good one if you would like to check more of that style out.

• The Perks of Being a Wallflower by Stephen Chbosky:

This is such a wonderful book, and it’s perfect summer reading too. It’s the coming-of-age story of a fifteen-year-old boy called Charlie, told entirely in the epistolary form via letters to an unnamed friend-of-a-friend. Quiet, introspective and naive, Charlie is surely one of the most loveable and achingly sweet characters I’ve ever come across in my reading life.
I would be biased with this one as it is my favourite novel, and I love the main character, Charlie, I highly recommend this to those who have not read it yet.

Buy- The perks of being a wallflower.

• The Great Alone by Kristin Hannah:

This is a historical fiction coming-of-age hybrid following the girlhood of a character in Alaska. It’s very hard to take in because there’s a lot of graphic content, but it’s extremely harrowing, beautiful, and absolutely well written. Many of the characters are extremely likeable as well, and they have some very fascinating character arcs due to the fact that you are following them for many years. I didn’t see many of the twists and turns of Leni’s life unfolding and the book had me in tears a couple of times. Stunningly written and in-depth realistic characters.

• A Monster’s Calls by Patrick Ness:

This is a coming-of-age story mixed with fantasy, exploring a teen boy having to deal with the slow death of his mother. A film is also made on this, which is really great too. You can give that a try as well but I would recommend reading the book first. I will recommend this book to anyone who has
ever felt broken. This book perfectly captures the struggles that children face in their lives, such as bullying, disease, broken families and strained relationships. I am a very emotional person, and this book made me embrace that.
Buy- A monster’s call.

So, this was my list, please feel free to share yours in the comments section below. I would love to read it.