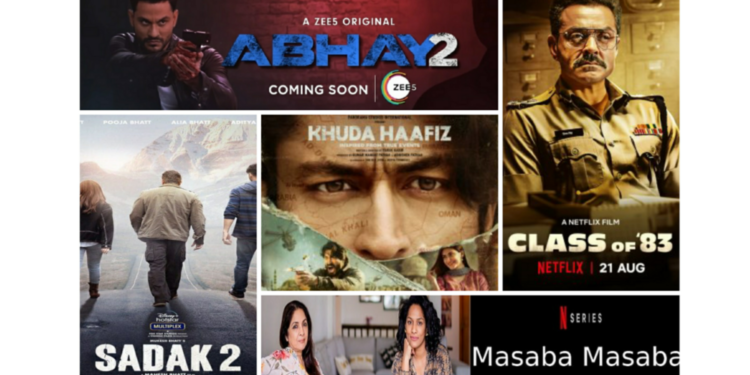 Nobody knew of the changes this pandemic would bring in the last 5 months, not even the filmmakers. There was a time when each Friday came with some new releases to entertain us but things are not the same now. With no date of cinema halls opening soon, the makers had to arrive at a consensus with several OTT platforms to give their movies a space to escape the loss. All the movies that got released in the last few days or which are about to premiere were earlier fixed for theatrical release but had no other option left than to keep peace with OTT release to survive the budget. Since tough times call for tough decisions, so the makers were prompted to come to terms of the crisis, and who knows this may become a new normal. At least one thing people should be happy about is that they are free to watch the movie in smartphones at their convenience during the lockdown.

Today, we at TSA have brought the list of major movies or series that are going to go on air later this month. Please check with the list and let us know which movie you are excited about.

Set in the backdrop of 1983, Class of 83’, starring Bobby Deol in the lead role, is slated for a release on 21st Aug 2020. Bobby in the movie will be playing the role of an IPS officer ‘Kabir’ who has been sent on a punitive duty to the police academy in Mumbai as ‘Dean’, where he will be seen teaching the young inducted subordinates to instil honour and devotion towards their nation.

The movie is officially based on Hussain Zaidi’s book with the same title. It has been made under the production banner of SRK’s Red Chillies Entertainment, and Atul Sabharwal has donned the director’s cap. As promised by SRK to Netflix CEO Reed Hastings in an exclusive deal of giving the newcomers a chance through OTT movie or series, he has kept his words this time too after 2019 ‘Bard of Blood’. Moving on the same line, the movie is said to be full of young talents like Bhupendra Jadawal, Hitesh Bhojraj, Sameer Paranjape.

It is a scripted web-series which brings the real-life mother-daughter duo Neena Gupta and Masaba Gupta to the reel life in which they play themselves. The series captures some joyous moments from Masaba’s real life, also depicting her foray into the dating world.

The series also stars NH10 fame Neil Bhoopalam in the supporting role. Directed by Sonam Nair and produced by Ashwin Yardi is ready for its release at the end of this month.

There are rumours associated with the series that Kiara Advani might be also in a cameo.

The romantic-action thriller stars Vidyut Jammwal in the main role and has a slot booked for release on 14th August.

Through the trailer, it can be seen that the movie has spanned over the exotic locations of Uzbekistan, Morocco and Kerala. These locations were chosen to concretise the essence of the story which is itself based on true events.

The movie is directed by Faruk Kabir and produced by Kumar Mangat Pathak and Abhishek, the duo who has last made ‘Raid’.

The movie sequel of the ‘Sadak’ of 1991 featuring Sanjay Dutt and Pooja Bhatt, is to release on 28th August. This time again Sanjay Dutt is recurring his role in the movie while Alia Bhatt and Aditya Roy Kapoor have been newly roped in. Though the trailer of the movie hasn’t dropped yet online but Alia Bhatt quite actively shared the feature posters of the movie through her Instagram account.

The movie marks the directorial comeback of Mahesh Bhatt after almost 20 years, who had also directed its prequel which was a hit on box-office back then.

Some apprehensions are surrounding the fate of the movie because movie watchers have been calling out Mahesh Bhatt, Alia Bhatt for being the epitome of nepotism in the Bollywood since the demise of Sushant Singh Rajput two months ago. Let’s see if the movie can survive the backlash from the fans.

The series will take the watchers on a ride of Abhay Pratap Singh (Khemmu) chasing down the kidnapper (Ram) to save the children in the city.

Kunal had earlier mentioned in the press that his DM was badly flooded with messages from his fans asking when the season 2 would come.

There are no disputes between PCB and BCCI for electing the new ICC chairperson : Ehsan Mani

There are no disputes between PCB and BCCI for electing the new ICC chairperson : Ehsan Mani