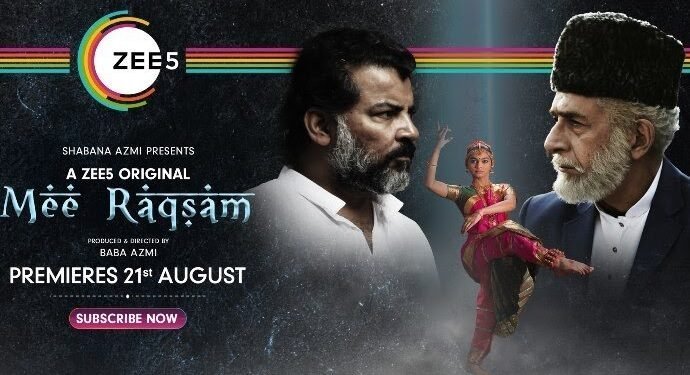 All his values run through Mee Raqsam, the film his children made in his memory. The humanistic story of the film is very well written by Safdar Mir and Husain Mir.

The story of Mee Raqsam revolves around a young Muslim girl of a small village, Mijwan of Azamgarh, Uttar Pradesh played by Aditi Subedi of the same village and her father, Salim played by Danish Hussain. Maryam in the film is seen being in love with music and dance, especially the classical dance form, Bharatnatyam which was instilled in her by her late mother, Sakina. The film’s title,  Mee Raqsam translates to  I Dance and as the title suggests, the film revolves around the dancing struggle of Maryam and her father’s constant efforts to see a smile on her daughter’s face, but only on the surface level. The subtext of the film is living life at one’s own terms instead of others.

Mee Raqsam portrays quite an authentic picture of most of the Indian villages, where people are very narrow-minded, no matter to which religion they belong. Bharatnatyam is perceived as a Hindu dance form in which the dancers are involved in idol worshipping. Hence, the Muslim community of Salim’s village takes Maryam’s learning dance as an insult to the religion. His family too shuns him as they took the whole act as an insult to their family. Salim is shown a tailor by profession and after his rejection of following the community’s orders, he gets banned by the villagers. People stopped coming to him for getting their clothes tailored and they even bans him from coming to the mosque for prayer but Salim doesn’t budge. He shows true faith in his religion as in one of the scenes he says “yeh log mujhe masjid se door karsakte hain, Allah se nahin” He kept his struggle going in fulfilling her daughter’s wishes and in doing that the story portrays a sense of fairytale effect. As the supporting elements of the story are either black or white, who go out of their way to either help Salim and Maryam or to bring them down. But at the same time, it also showcases the reality that you’ll find all kinds of people in every community. The warmth of the plot makes you love Mee Raqsam and especially the core of it i.e. the father-daughter duo.

The film is strong in performances, none of them are dull in any way. The lead performers Danish and Aditi are very natural in their roles. The sincerity they both show in their roles ignites emotions in the audience. The supporting cast of Mee Raqsam is praiseworthy with Naseeruddin Shah as the dogmatist community head, Shradha Kaul as the oppressing Khala, Kaustabh Shukla as helping auto-driver, Farukh Jaffer as the classic Amma Jaan, Sudeepta Singh as a kind-hearted dance teacher and Rakesh Chaturvedi Om as the rich businessman, played their roles extremely well, adding to the charm of the film. The film doesn’t feel slowing down even for a second and has a lasting imprint.

It provides us with various dialogues which leave us all thinking for long, such as in one scene Salim says “Hamara Islam itna kamzor nahi hai ki ek bacchi ke dance karne par uski toheen ho jayegi” or in next scene a supporting character, Ashfaque says “agar khwab dekhna chhod denge toh zindagi berang hojayegi” or in another scene the character of Jai Prakash’s daughter says to him “Mohammaden ladki, Indian dance, matlab? Who Indian nahi hai kya?” or in one of concluding scenes Uma, Maryam’s dance teacher says “Kala ki rooh uski azaadi hai.” The film is filled with a lot of such thought-provoking dialogues. The film has only two songs, “Yeh Jo Sheher Hai” and “Dum Ali Ali” but they both are a treat to the ears as well as the soul.

To sum up, Mee Raqsam is a very heartwarming tale of father and daughter fighting the society’s prejudices and stereotypes to live their life on their own terms. The film shows no new story but its way of presentation will make its way dancing to your heart, for sure. And hence, we at TSA suggest you to take 93 minutes out of your busy schedule to watch it and have a pleasant time.

The film is streaming on Zee5.