Netflix is back again with a sensitive, issue-based comedy Bollywood movie. This time with the beloved 'Bareilly Ki Barfi' father-daughter pairing of Pankaj Tripathi and Kriti Sanon, but in a totally different avatar. The Mimi trailer is out, and here's what we think about it. 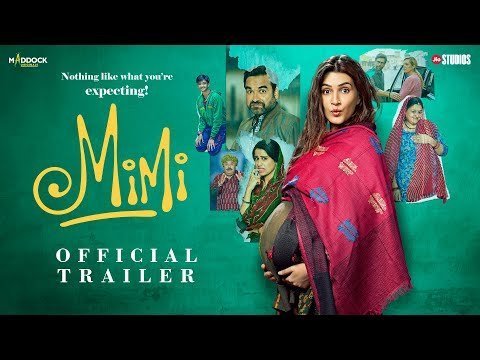 OTT platforms have lately been a safe haven for Bollywood movies that couldn’t have a giant theatrical release owing to the Pandemic. Movies in India are no less than a weekend festival. But due to COVID protocols, people have been missing out on this hubbub of the cinema experience.

Helping out is one such platform, Netflix. It has provided an excellent platform for Bollywood movies and does a great job at their promotions. Netflix India has been on a boom ever since it started producing its originals, giving the makers the creative liberty to choose from a wide range of topics and has relatively less stringent censorship.

Adding yet another leaf to its streak of presenting successful Bollywood commercial movies revolving around unconventional subjects is the new Netflix original ‘Mimi’.

The movie is directed by Laxman Utekar and produced by Dinesh Vijan’s Maddock Films, which has also successfully produced Hindi Medium (2017), Stree (2018), Luka Chuppi (2019), and Bala (2019). The songs and background score are by A. R. Rahman.

The trailer came out on Netflix India’s YouTube channel on Tuesday, 13th July 2021. The movie deals with a very sensitive yet alien concept in India, surrogacy.

With a comical take on this taboo subject, this movie has already gotten the hopes high. What is visible from the trailer that has pretty much given away the entire story is based somewhere in Rajasthan. With all the forts and classical music and dressing, it is yet another small town-based movie.

It looks like Bollywood is not giving up on these hearts-of-North-India-commercial-romantic-comedies anytime soon.

The trailer, if anything, has given the major highlights of the film, and we can only wait for the movie to fill in those gaps.

However, it is based on a topic that isn’t talked much about in a normal household, so it hopefully will serve as a conversation starter.

With Pankaj Tripathi, who is known for his impeccable comic timing, the movie will be no less than a roller coaster ride. Kirti Sanon, in the title role, looks like she has gotten a hold of the character that is essentially a Rajasthan-based small-town girl.

The dialects were a little off at places, but it is too soon to say anything. With Supriya Pathak and Manoj Pahwa playing, Mimi’s parents will surely be a delight to watch. The movie taglined as ‘an unexpected journey of expecting’ will have an exclusive world premiere on Netflix on 30th July 2021.

Keep watching this space for its review.

Also Read: Review of Grahan: A Well-Crafted Narrative That Will Keep You Captivated By The Screen

A Letter To Akshay Kumar From His Fan, Since Childhood