Money Heist Review: It Is A Heist Of Your Heart As Well As Your Mind!

Before the final ‘Bella Ciao' to probably the most-awaited series, Money Heist is still like it was before: Unique and unmatchable. 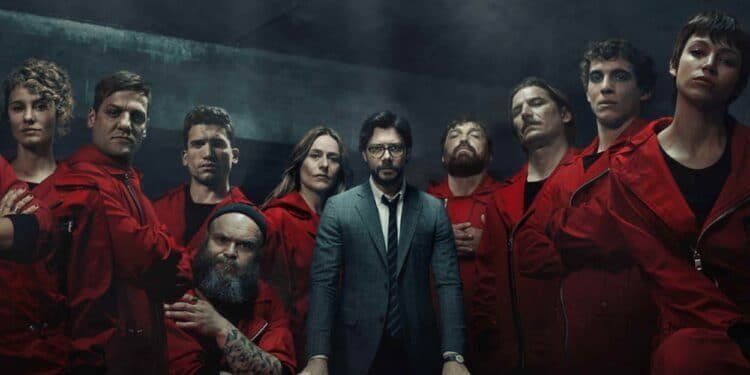 A classical series with a pulse-pounding plot backed with strong characters and ideas straight from a top-notch intellectual’s brain– Money Heist has today become a worldwide phenomenon.

A story that began nearly five years ago, La Casa De Papel, aka Money Heist, became a go-to series for netizens during the pandemic and lockdown.

The series that was able to herald a position among the most-viewed series on Netflix and the most-viewed non-English series is now coming to a conclusion, and– it is a freaking war.

The last season of the series released its first part on 3rd September, and the fanatics were already binge-watching the 5 episodes (I know how less they are, trust me) of Vol.1. An office in Jaipur declared a ‘Money Heist’ holiday to allow the employers and the equally curious boss to watch the series without disruption– if that is not an open testimony to the enormous fan following of this series, then I don’t know what is!

The series begins right where we left it off– with Nairobi dead and the gang mourning, Professor at gunpoint, and Lisbon inside the Bank of Spain. After a deadly heist at the Royal Mint of Spain and the successful retreat of the team, we felt like it was going to be easy this time as well.

With Alicia Sierra tailing behind Professor, the scene has changed. Alicia and Gandia were able to turn the tables upside down– but, where Gandia mainly was a sexist and stone-hearted human, Alicia is the real devil with the right amount of devious psyche and shrewdness needed to beat the Professor.

Without an external guard to tell them the situation– the team members find themselves alone and in the middle of a conflict– both internal and external.

Just like the previous parts, the series adds several flashbacks, to sum up, certain pieces, but it looks like we have to wait for December to finally unravel all of them. The five episodes are mostly building up a story to give a finale in the next volume still as compared to the prior parts, this one is not slow in its plot and will present you the ‘drama’ and ‘thrill’ you are looking for!

Several new characters are introduced in the series, but bad news for the fans– Arturo Roman is still suffering badly from his hero complex.

Tokyo is even more of a badass than before, but with Nairobi’s memories sticking with her, she has amplified her anger, evolving to be the worst for the enemies. Bogota and Helsinki also have a hard time trying to grip themselves.

Denver and Monica were struggling with their own issues when they left behind their son and Palermo, it seems, has developed an emotional bond with the group. Money Heist has all the arms, grenades, guns, fights you are looking for but it never once completely forsakes the emotions of our characters.

Tamayo finds himself stuck in the middle of an Apocalypse for his career– with the citizens rooting for the gang and the government on his head. His part portrays much more than what it looks and the level to which he can fabricate the facts will make every spectator think about several aspects.

Still, several pieces of the puzzles are unanswered, some of them entirely missing. The series will again make you wait desperately for the next part. Even though the team and the fans lost Berlin before, there are scenes in the episodes where you will get past glimpses of the iconic and legendary guy, who has been the brain of our much-loved Professor several times.

The story developed through Berlin has not revealed its true purpose and it appears that the most interesting spoilers will be in the next volume. Before you watch it, try to deactivate your social media accounts!

To further explain, the plot will be ruining it, so it is time for you guys to watch the episodes before someone ends up spoiling them for you this time! The next and unfortunately final part will be released on 3rd December.

With no Money Heist to look forward to, it will be a bad day for those who love crime drama. Money Heist has really set up the bar too high (the Professor as well)

For Professor, For Denver, For Monica, For Tokyo, For Bogota, For Palermo, For Manila–but most importantly For Nairobi, Today and Always!

Also Read: Friendships That Should Have Happened In Harry Potter (But Never Did)

Money Heist: Netflix India makes a cross over with regard to the Professor’s personality!