Some fascinating perspectives on the Oscar-winning film “Parasite” (2019). What are your views about the film? 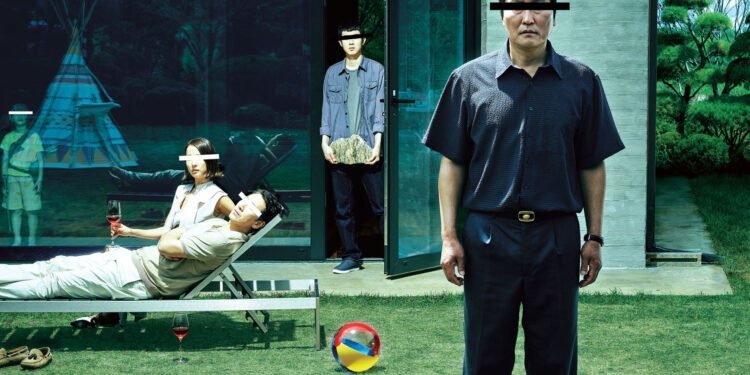 When the Kim siblings move in with the Parks, they take on English names. Ki-woo changes into Kevin, while Ki-Jeong turns into Jessica. The anglicized names not only impress the Park family, but they also reflect the changing culture of South Korea. American culture, lifestyle, and language have a strong influence on the country’s youth. It speaks o the necessity to break out from one’s origins to reach new heights.

Ki-Jeong is the only one who adopts and wears her given name, Jessica as if it were a second skin. Jessica embraces her new identity with zeal, while her brother, who has been christened Kevin by their new employers, is quite content with his birth name.

Her fate will finally punish her for fantasizing about a life that is far beyond her grasp. On the other hand, Director Bong sides with the Kims, offering them a glimmer of optimism for the future.

Cinephiles have spent a lot of time debating and discussing the famous couch sex scene. The incident was a real paraphrase of the term “parasite.” Even at their most private, most intimate moments, the Parks are not aware that their domestic help, the Kims, are keeping an eye on them. It demonstrates that employers are far more weak and susceptible than they realize. Also, the Parks never glance down; instead, they always look up. As a result, they are unable to comprehend the Kim family’s presence in their home.

As seen in the movie posters, a black band runs vertically across their eyes. The term “justice is blind” is a good way, to sum up, the movie. In the end, everyone had to pay the price for their wrongdoings and lies in some way. Regardless of their social standing, nobody is spared, thus giving the film a bleak but optimistic conclusion.

The first to infiltrate the Park family is Kim Ki-woo. When Mrs. Park suggests that she would need an art tutor soon, Ki-woo instructs his sister Kim Ki-Jung to pose as one. She does it convincingly, and as a result, she is hired by the Parks as well. They sing a song at the entrance before Ki-woo introduces her to Mrs. Park. This is a song that is often utilized in South Korea to assist students in retaining complex information. Ki-Jung had to perform the song to remember what she had been told so she wouldn’t contradict Ki-woo.

The first housekeeper in the film is claimed to be allergic to peaches. Mr. Kim makes her cough and looks to have tuberculosis by feeding her peaches. As a result, Mrs. Park is obliged to fire here. But whence did Bong get the bizarre peach idea? The filmmaker once went on a trip with a friend who was allergic to peaches. Bong believed it was a prank because he had never experienced anything like that before. When someone threw a peach at Bong’s friend, though, he had an allergic reaction. Many years later, Bong recalled the incident and used it in the film.

The movie comprises approximately 480 visual effects shots, the majority of which, shockingly, originate from the beautiful house. The first floor and its private front yard were built on an empty outside lot, and the second floor was inserted through a green screen on top.

Meanwhile, the different extra floors were added one by one. According to Bong Joon-ho, if the house’s construction “isn’t perfect, the plot doesn’t function,” which necessitated the employment of special effects magic. Almost all of these special effects, however, are “invisible.”

It wasn’t a mistake if you discovered one particular continuity fault in Parasite. Or, at the very least, it wasn’t accidentally included in the film. As editor Yang Jin-mo pointed out in an interview, Ki-Jung consumes jerky, only to pause when she discovers it’s for the puppy.

When you hear the doorbell, we go to a wide shot of the family. She eats it with her left hand to her right hand, which is a slight continuity problem. This error, according to Yang, was not made by accident. They hid it in plain sight for the fans to find.

Most of us presume that the title: Parasite refers to the rich Park family and the needy Kim family. After all, the Kims enter the Parks’ home and deceive them into obtaining high-paying jobs. The director, on the other hand, explained that the word “parasite” had two meanings.

The Park family is a parasite, in addition to describing the impoverished sucking money from the wealthy. They utilize their money to exploit poor families with their cheap labor since they cannot wash dishes or clean their homes. In some ways, they, too, are social parasites.

Also Read: To All the Boys Vs The Kissing Booth– Which Netflix Rom-Com Is Better? Let’s Find Out!