Confused about what to watch next? Stuck on the same old movies? We have a list of all the movies coming to Disney + Hotstar this November! 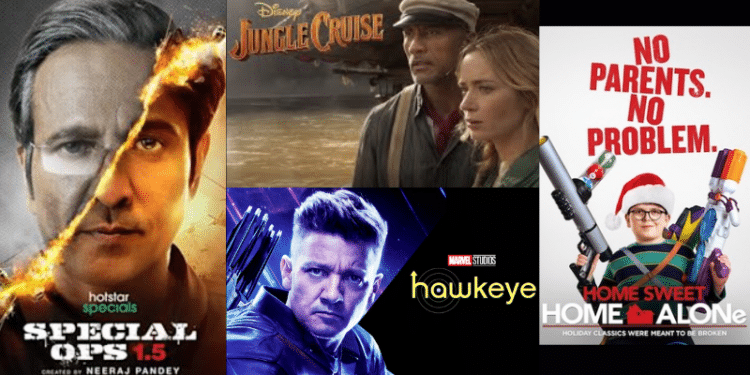 We are finally in mid-November and several shows and movies have already been released on Disney + Hotstar.

Many more are coming this November and we have created a list for you guys so that you don’t miss out on any!

So, here are the movies coming to Disney+ Hotstar this November–

The story follows a married couple going through financial issues who tries to steal back a costly heirloom from a child. Having striking similarity to Home Alone, it is a perfect watch to lighten up your mood.

Home Sweet Home Alone was released on 12th November, and it is available on Disney+ Hotstar for you to watch.

2. Shang Chi and The Legends of Ten Rings

Next on the list is a character from Marvel Comics, Shang Chi, who is compelled to encounter his past where his father, the head of Ten Rings, pulled Shang Chi and his sister to a mythical village. The way marvel has interwoven Asian mysticism with western heroes would be interesting to watch.

It stars Simu Liu as Shang Chi and is the 25th film of the Marvel Cinematic Universe. So, if you are still in the Endgame period, it is time to move on as Shang Chi seems to be a promising film.

Shang Chi and The Legends of Ten Rings was released on 12th November, and it is available on Disney + Hotstar for you to watch.

The film is based on Jungle Cruise, a theme park of Walt Disney, where Jungle Cruise is a simulated riverboat ride and the movie features the same. It stars Dwayne Johnson, Emily Blunt, Édgar Ramírez, and Jack Whitehall.

The story is about a captain of the riverboat who takes a scientist and her brother through the jungle to discover the Tree of Life.

Jungle Cruise was released on 12th November, and it is available on Disney + Hotstar for you to watch.

A creation of Walt Disney and Pixar Animation Studios, Ciao Alberto is the story of Alberto who works with an imposing fisherman with tattooed one arm and near to zero words for the mentee.

With his best friend Luca away for studies, Alberto has nothing else but to impress his mentor.

Ciao Alberto was released on 12th November, and it is available on Disney + Hotstar for you to experience.

The most loved character from the world of Frozen, the goofy snowman is now a showman and Olaf is returning to retell us five of the most famous Disney classics.

Now, as it is Olaf, we already know that the series is going to be a ride filled with joy and fun moments and filled with nostalgia as well, hearing the tales from childhood.

Olaf Presents was released on 12th November, and it is available on Disney + Hotstar for you to enjoy.

Based on the best-selling book by the journalist Beth Macy, it is an eight-part series with episodes released every Wednesday on Disney+ Hotstar.

It is around the catastrophe that emerged after the birth of OxyContin that caused explosive effects in the small towns and cities of America. If you liked Chernobyl, you will definitely love watching Dopesick as well.

Dopesick was released on 12th November, and it is available on Disney + Hotstar for you to watch.

The series is set inside the world of Special Ops Universe where Kay Kay Menon plays the role of Himmat Singh.

After the success of Special Ops, it is not surprising if the series glue us to the screen. However, before you see this series, you need to see the previous one.

Special Ops 1.5 was released on 12th November, and it is available on Disney + Hotstar for you to watch.

Clint is one of the top characters who tied the audience with the Avengers. However, he is also the most underrated, and little is portrayed about him in the series apart from his bond with Natasha.

Jeremy Renner will, of course, continue his role as Hawkeye alongside Hailee Steinfeld as Kate Bishop. The series will continue after the events of Endgame. And after seeing Falcon and Loki, Hawkeye is another promising creation from the MCU.

Hawkeye is releasing on 24th November, catch it on Disney + Hotstar.