Parts of “Mulan” filmed in Xinjiang where millions of Muslims are detained- Disney in an unasked battle.

by Anamta Husain
in Buzz, News
0 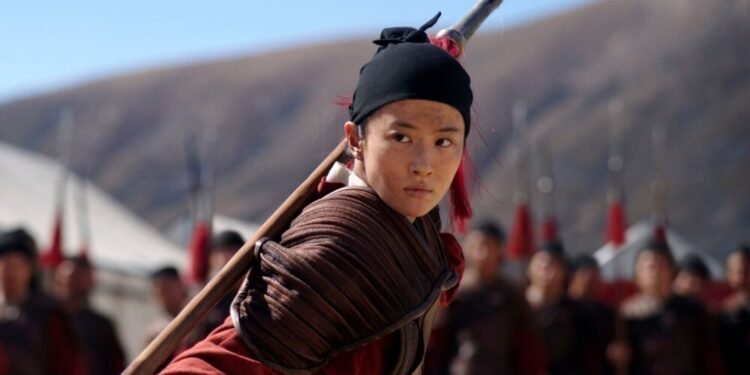 2
SHARES
0
VIEWS
Share on FacebookShare on TwitterShare on WhatsApp

The re-imagine of the Chinese hero Folk-lore, “Mulan” was released this year in March 2020. The audience loved watching a courageous girl who turned into a warrior- with a heightened representation of the Asian culture.

But it apparently has started another battle Disney did not think about.
The film was already in the light and people were asking for a boycott when the lead actress defended a crackdown on the protesters in Hong Kong by the police.
“Disney kowtows to Beijing, and because Liu Yifei openly and proudly endorses police brutality in Hong Kong,” Wong, tweeted on Friday. “I urge everyone who believes in human rights to #boycottMulan.”

Khaled Beydoun, a well-known law professor and author of American Islamophobia condemned the film as well.

A portion of the movie was filmed in Xinjiang, western China, where the government has been detaining and committing atrocities and human rights violations against the Uighur Muslims.

Millions of people are detained and are tortured in various ways to disconnect them with their religious beliefs.
Disney+ premiered Mulan last Friday. In the ending credits, Disney thanked the Chinese Communist Party Xinjiang Uyghur.

And Hence, the netizens started with their #boycottmulan tweet. Several people are demanding the boycott of the film for its inept interpretation of the Chinese tradition and culture as well- while some for the Hong Kong protests.

The film’s production designer, in an interview, said his squad had spent “months in and around the northwest province.”
“Why did Disney need to work in Xinjiang? It didn’t,” wrote Isaac Stone Fish for The Washington Post’s opinion pages. “There are plenty of other regions in China, and countries around the world, that offer the starkly beautiful mountain scenery present in the film. But in doing so, Disney helps normalize a crime against humanity.”

“Mulan is a patriot but she shouldn’t be placed in Xinjiang, because patriotism has been forbidden in Xinjiang,” Abduweli Ayup, a Norway-based Uighur rights activist who has entered in the calls for a banning of the movie told the Wall Street Journal. “In China, patriotism is loving the Chinese Communist Party.”

The World Uyghur Congress tweeted “In the new Mulan, Disney thanks to the public security bureau in Turpan, which has been involved in the internment camps in East Turkistan.”

In the new #Mulan, @Disney thanks the public security bureau in Turpan, which has been involved in the internment camps in East Turkistan.

Last year, the actor publicly supported the #HongKongPolice in their violent crackdowns on pro-democracy protesters.https://t.co/0g5o4GB2M5

Activist Shawn Zhang also criticised the company, writing “how many thousands of Uighur were put into camps by Turpan Bureau of Public Security when filming Mulan there?”

The question is even after reported atrocities committed against the Uyghur Muslims where they are brainwashed and made to adopt the Han Chinese culture and even with numerous outrage over the years- Why did Disney choose to direct the film in the exact same location?

As amnesty international accurately puts, “Disney, can you show us your human rights due to diligence report?”

The new Mulan movie was filmed in the region where China has Uyghur internment camps and there are “special thanks” for a Xinjiang government agency in the credits.@Disney, can you show us your human rights due diligence report?https://t.co/7IaPsYQtKW

It is not a doubt that over the years Disney has given a variety of wonderful movies with animation- it is deeply connected to our childhood. But this act has no doubt smeared its reputation. Uyghur Muslims have been retained in the camps for quite a long time now but the world has turned a blind eye to it. The “re-educating” camps as the Chinese government call them is nothing but a living reality of torturous human activities- and Disney has ignored all that to film a single movie.