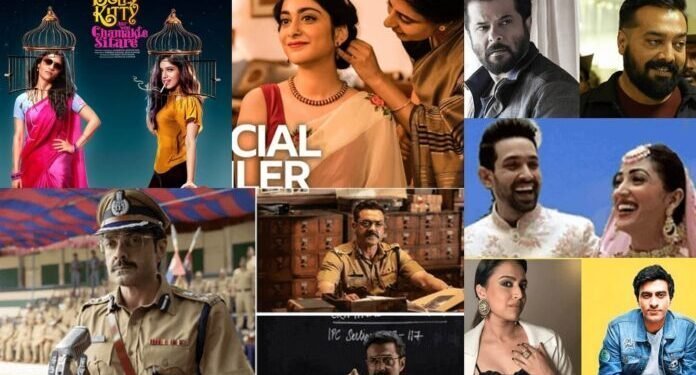 The lockdown enforced by the Covid-19 pandemic necessitated Movie theatres to close down and even as the ‘Unlock’ across the country has begun, it’s a tricky business still and major filmmakers have skipped a theatrical release. The ‘Quarantine’ period showed a colossal steep in people using the streaming services to watch their favourite content, which stirred up the race between streaming platforms, including Netflix, Amazon Prime Video, Disney+ Hotstar, etc.

Taking up the streaming race up a notch, the streaming giant has announced a line-up of 17 new offerings spanning a set of genres — including eight new films and series which interestingly have 8 women directors on the list. The upcoming originals are a counterfeit to the regional content that competitors like Amazon Prime Video and Disney+ Hotstar are producing, including Sushant Singh Rajput starrer- Dil Bechara.

“Our exciting lineup of content is across multiple genres and many formats. We are bringing heartfelt dramas, romcoms, more, from amazing creators and talent, both established and emerging. We announced these Indian original series and films because our audiences love the dazzling diversity and variety of our stories,” said Monika Shergill, VP — Content, Netflix India. She added, “As a full-scale entertainment service, we want to offer an exciting slate to our members, knowing that each person’s Netflix profile is unique to their taste. So whether they love global titles, world cinema, Hindi,  regional Indian language titles, they will discover something they enjoy on any given night.” Though, the premiere dates haven’t been announced yet.

Sanjay Dutt’s Torbaaz, which went on floors in October 2017, has been in limbo for quite a long time now.  The film directed by Girish Malik is an action thriller set in Afghanistan. Dutt will be seen in the role of an army man and a father to a young child who tries to rehabilitate the young fidayeens through cricket.

Bombay Rose is the long-awaited feature debut written, designed, and directed by Gitanjali Rao, a film festival favourite, the film chronicle lives of the people who migrate from small towns, seeking minimal life in the maximum city. The animated film premiered at The International Film Festival last year and opened at the Venice Critics’ Week, are some of the new movies to watch out for.

A Suitable Boy – Mira Nair’s BBC series and a highly-anticipated adaptation of Vikram Seth’s acclaimed novel of the same name will debut in India on Netflix. The six-part series has been adapted for the screen by writer Andrew Davies, best known for his work on Pride and Prejudice and War & Peace.

AK Vs AK, starring Anurag Kashyap and Anil Kapoor, a director kidnaps a movie star’s daughter and records the whole thing is Looetra famed Vikramaditya Motwane’s dark comedy. Atul Sabharwal’s Class of ‘83  featuring Bobby Deol, Bhupendra Jadawat, Hitesh,  Anoop Soni is based on S Hussain’s Zaidi’s non-fiction book ‘The Class of 83: The Punishers of Mumbai Police’. The book profiles members of the 1983 batch of graduates from the Police Training School in Nashik who went on to become “encounter specialists” with the Mumbai police.

While some of its recent releases like Hasmukh, Betaal, and Mrs.Serial Killer have drawn mixed or downright negative responses and the streaming platforms are often criticized for misusing the lack of censorship on their content yet the audiences are increasingly spoilt for choice with the array of established and emerging OTT platforms.