by Arisha Khan
in Buzz
0 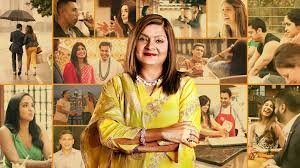 Oscar-nominated filmmaker, Smriti Mandhara’s show “The Indian Matchmaking,” the traditional dating series has dominated online discourse, with viewers from across the globe chiming in on the drama. When finally aired on 16th July, the show has left many viewers disappointed with the stereotypes it enforces, with many calling it out for being “extremely cringe-worthy” given the surprise endings and popularity — it’s currently third most-popular show on Netflix — it seems likely that a renewal is on the horizon. Hey, at least people are talking about the discomfort about the show.

Episodes titled ‘Slim, Trim and Educated,’ ‘Just Find Me, Someone,’ ‘It’s High Time’ and ‘Adjustment and Compromise,’ among others, have been the subject of much ridicule and many memes in India over the past weekend. Viewers are unhappy with the way the show portrays arranged marriages and, instead of fighting biases and prejudices, it glorifies them, with most complaining how the criteria for ‘fair-skinned’ bride annoyed them. However, a few said there is no point criticising the show as it’s just showing the ugly truth behind the Indian match-making system. If you had an arranged marriage, you might be compelled to have ‘deja vu’. If you haven’t yet gone down that rabbit hole, may the force be with you!

In an interview with the Los Angeles Times, director Smriti Mundhra said she wanted to depict this tradition of arranged marriages for a global audience on Netflix, but not specifically for a Western gaze. But by failing to capture the changes and progress India’s urban youth have achieved over the years, the result is a snackable, amusing, and shocking show for white audiences to binge.

Nowhere in sight are the struggles of a ‘modern’ Indian, battling the regressive mentality of their parents. Apart from just navigating the difficult search for a suitor, these struggles include the general resistance many have to put up against parents who continually try to exert their choices upon us. But is it really the fault of the series? We like to believe our society and culture are all rosy but nosey. We always offer advice to the next person with a ‘But it is for your own good only’. Now Netflix took all this talk of ‘for your own good only’  and created an entire show out of it.

Brown society when they see a girl who is over 25 and not married #IndianMatchmaking pic.twitter.com/oMwF7f81GL

Mundhra claims the show is meant to capture the diversity of ideologies and backgrounds that make up the South Asian experience, but no criticality is exercised at any point. But what you can’t avoid is this spread of misogyny, casteism, colourism, sexism, you name it and Indian Matchmaking is that and a lot more. Perhaps some diversity would have been reflected on the screen if the director had actually bothered to speak to a cross-section of young Indians, instead of running off to NRIs. Just because Western audiences might find certain old-fashioned facets of our culture intriguing, doesn’t mean we should glorify those things.

Story in brief : Over 8 episode, Mumbai-based match Sima Taparia travels from Houston to Chicago to Mumbai to sit her clients down and help them ‘arrange’ their marriage. These desperate for love singles then skim through bio-datas to find potential partners. Then, they go on sometimes fun, sometimes awkward first dates – often with their family in tow – to discover whether these good-on-paper matches can turn into love that lasts a lifetime. And *NEWS FLASH* the crux of the show doesn’t lie there; instead it is about all the raita that is preloaded in between these stages. As far as reality TV goes, this nightmarish discovery for love seekers is entertaining but also vexing. Worth the watch you ask? Read the full review to find out!

Towards the end of Greta Gerwig’s Little Women, standing in the attic, stuttering with frustration, Jo March tells her mother, “Women… They have minds and they have souls as well as just hearts. And they’ve got ambition and they’ve got talent as well as just beauty. And I’m so sick of people saying that love is just all a woman is fit for. I’m so sick of it.” Then she blurts, “But I’m so lonely.”

It’s hard not to think of Jo’s confused anger while watching Netflix’s Indian Matchmaking as people – some agreeable, some not. The show is stressful because it confronts us with our own loneliness, presents marriage as a solution and accomplishment, but then reveals the process of getting there to be an exercise in self-erasure – sorry, “compromise”.

First Taparia and her clients chop people down to a set of euphemistic adjectives together, creating a specific hole in the client’s jigsaw-life that Taparia will sift through hundreds of pieces to find a perfect fit for. Then Taparia tells us exactly which quality of her client’s is going to reduce their bargaining power in this market place, effectively preparing the client to shove the wrong jigsaw piece into the space they’ve been saving.

Me every time someone asks me about my dating life from now on #IndianMatchmaking pic.twitter.com/Ps0KSWG8W8

Marrying within your caste and class is already shockingly easy in India, and you’re likely to end up in a socially respectable marriage without ever acknowledging the existence of either criteria. Stagnant social mobility, casteist educational institutions and economic inequality glom together to create families, neighbourhoods, schools, colleges and workplaces where everyone has similar incomes and wealth, lifestyles, intellectual interests and ambitions. In other words, the metrics of compatibility all conspire towards upholding oppressive structures. So to seek out an arranged marriage is to tell the world that you don’t want to leave even the possibility of straying out of your privilege.

It’s tempting to think of arranged marriage as a no-bullshit approach to modern relationships (“human Tinder”) but “Matches are made in heaven and God has given me the job to make it successful on Earth,” Sima Taparia, the 50-something narrator claims early on in Indian Matchmaking. I’m not entirely sure what makes Taparia more qualified than any nosy neighbourhood Indian aunty with an abundance of free time and a maternal instinct. For most of the season, she goes about setting up people at random, interpreting compatibility between two people based solely on the number of similarities they might have.

Indian Matchmaking, at the outset, makes the choice to remain blind to the realities of India, limiting its scope to a version of arranged marriage that is heavily sanitised and often comes with no real repercussions. There’s nothing wrong with representing only a section of the society as long as the makers have the foresight to acknowledge it.

In terms of the reviews, Indian Matchmaking has managed to garner flak and equal quantities of accolades. Giving it a bottom line of, “Insightful, humorous and heart-warming,” Inkoo Kang of THW notes how the seeming efficiency of arranged marriage can be considered either its most compelling promise or its biggest turnoff. Kang observes how: “The series makes relatable a much-misunderstood practice that’s been forced to contend with shifting gender roles, modernizing criteria for matches and stiff competition from the romance of ‘love marriage”. Kang calls it “a winsome balance between genuine insight, gentle humor, cringe-inducing spectacle and heart-warming connection”.

On the other hand, there is disapproval. Critics like Kennith Rosario of The Hindu  labels the show: “The big fat desi wedding stereotype.” In his review, Rosario indicates how a couple of episodes seemed like parodies of “crazy rich desis fantasising over weddings and finding a life partner through a neighbourhood aunty.” The terms like ‘adjustment’ and ‘compromise’ thrown in good measure. Rosario doesn’t shy away from stating that the “haphazard and scattered” storytelling gives Indian Matchmaking a distracted tone.

The trouble is, over the course of eight abruptly structured episodes, Indian Matchmaking becomes an infuriating exercise in delusion, ending up doing exactly what it intended to rally against: exoticising a calculated, cultural practice that in reality is steeped in decades of misogyny, casteism, and gender inequality. Despite its perceived flaws, Indian Matchmaking surely seems to have caught the attention of critics and binge-watchers alike. Though the show tends to look at arranged marriage through a glamorous lens, it also brings forth issues such as weight being part of the criteria for finding a good spouse, or how being divorced might leave one with limited options within a stockpile of potential matches. ‘Indian matchmaking’ encapsulates the cliché of the arrange marriage system in an entertaining and engaging way, but also unabashedly celebrates the most regressive ideas and stays restricted to India’s elite upper-class NRIs. We’re in a pandemic, we can (hate)watch whatever we want and nobody is obligated to sugarcoat Indian elitism, but the show glosses over the mental scars that come with being treated like chattel, revealing the ugly side of arranged marriage. On the whole Netflix’s show is amusing and entertaining in some parts, but regressive in spirit and with dull characters.

So TSA Ratings for Netflix’s ‘Indian Matchmaking’ is 3 out of 5.

All episodes of Indian Matchmaking are now available to stream on Netflix.