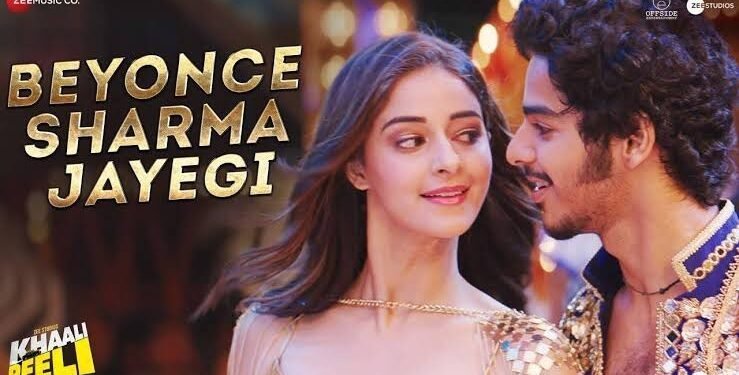 Ishaan Khatter and Ananya Pandey starrer Khaali Peeli is set for OTT release on 2nd October. Its first song was released on Sunday, 6th September 2020, it is sung by Nakash Aziz and Neeti Mohan, penned by Kumar and composed by duo Vishal-Shekhar. The song goes like “Tujhe Dekh ke Goriye, Beyonce Sharma Jayegi”. On such Racist lyrics, the netizens flooded Twitter with disappointing tweets.

Netizens raised their uneasiness with the song on twitter and even showed apology towards the American Singer, Beyonce, who is a black American woman.

Dear Beyonce,
We are very very sorry for this, i am deeply ashamed by this behaviour of bollywood, its highly unacceptable and vile.

beyoncé honey , we are so sorry 🥴 pic.twitter.com/abS5MShFth

The coming of such a racist song at this point when there have been racist attacks on Black people in the West just a while ago, speaks of the hypocrisy the Bollywood is afflicted with. Because it is these actors who were very vocal on Twitter, Instagram and other social media platforms about the movement “Black Lives Matter” but now they seem to have come out of their synthetic concern and shown their long obsession with fair skin colour to the world.

Imagine the audacity to write something like "Tujhe dekhke GORIYA Beyonce sharma jayegi" in 2020.

You know what nvm imagine the audacity to think this Pandey woman is actually competition to Beyoncé, lmao. https://t.co/HQFIU017VP

I just watched ananya's song and immediately disliked it after listening the title Beyonce sharma jayegi. I mean what the hell was that???
Lyrics were pathetic. 🤬👎👎👎#Beyonce pic.twitter.com/UpqyXXXxRh

Above are only very few of the tweets slamming the song and the toxic sexism it promotes.

The industry appears to be normalising “Gora Rang” (fair complexion) as something beautiful which is superior to something that is dark or black here in the song.

The problem with the lyrics doesn’t end here with just one line but it goes on to add sexism in it as well. The lyrics read, “Bhadkili nakhrili Chamkili Lachkili. Tu jo kamar ye hilayegi”, which inexactly points towards the curves of a woman, when shaken woos men. Bollywood! It is high time Bollywood and people, in general, get over social ills like sexism and racism. If we being in the 21st Century can’t be free from this, I don’t know, if we’ll ever be.

The song has already been receiving a large number of negative responses over its unpleasant lyrics since it was released. It has already got 213K dislikes and the number doesn’t seem to stop anywhere near. Bollywood has always showcased toxic-isms like sexism and racism and the audience has always been silent on it. But times have changed now, the audience now believes in slamming the wrong right away, no matter which name is behind the act. We hope Bollywood learns the lesson soon and stops promoting such toxicity for real now.

Watch the song here, if you haven’t watched it yet. And let us know your thoughts about it in the comment section below. And check out our entertainment category for the latest reviews and updates of various web series and movies.